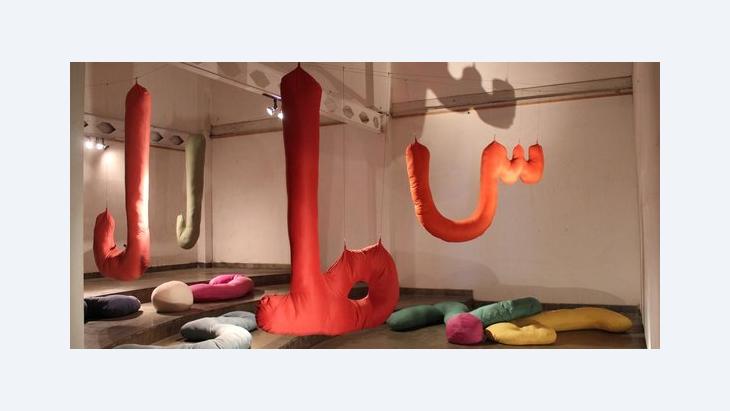 The Biennale in the Indonesian cultural centre of Yogyakarta is regarded as one of the country's most important art events. At this year's "Yogya XI", 40 artists are showing their work on the subject of "Religiosity, spirituality and belief". Christina Schott reports

The sound of metallic blows resonates throughout the extensive Yogya National Museum. Anyone wanting to see if the sound emanates from clanging church bells or Buddhist prayer bells must first walk beneath an installation of bamboo canes wrapped in coconut fibres by Indian artist Valsan Koorma Kolleri through to the forecourt of the north wing: There, suspended on the wooden stilts of a traditional Javanese house, are rusty gongs automatically struck with hammers every few minutes.

On the gongs, as well as on dozens of steel struts jutting out of the ground around the wood structure, printed anecdotes and legends from various centuries relate details of Java's eventful history – of the arrival of Hindu deities, Islamic scholars and Christian missionaries, of the emergence of the holy mountain of Semeru in the east of the island, as well as the inexorable modernisation of the cultures during the colonial era.

A culture of contradictions

Rather in the manner of a comprehensive introduction to the Biennale Yogya XI / Equator # 1, the installation "Site of Gods" by Javanese artist Jompet Kuswidananto construes Indonesia as a "culture between the traditional and the modern, colonisation and independence, East and West, agricultural and industrial society, native peoples and newcomers", where a "blend of precarious values" dominates, "immature and confusing" – too diverse and rambling to form one single identity. 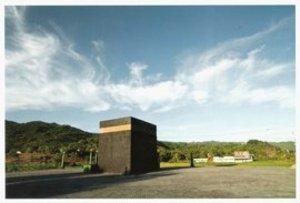 ​​There are few places in Indonesia that reflect the archipelago's diverse cultural and religious past as clearly as the central Javanese city of Yogyakarta – to this day an autonomous, Muslim sultanate as famous for its mediaeval Hindi and Buddhist temples as for its status as Southeast Asia's centre for modern art. The very place to attempt an artistic rapprochement with various creeds and religions of the nation's many different cultures.

As curator Alia Swastika explains in the catalogue to the exhibition: "Although the curatorial concept initially emerged as a spontaneous reaction to the many conflicts that occur in the name of religion, we eventually extended it to include religious practices, faith and spirituality as an element of contemporary Indonesian society."

Her Indian co-curator Suman Gopinath however draws attention to the fact that the common ideals of diversity and peaceful coexistence are now under serious threat from fundamental forces – in India from the radical Hindutva, and in Indonesia from Islamists.

Aiming to demonstrate the human face of religion

But few of the works concern themselves directly with religious violence. Most of the artists explore the reciprocal influence of politics and religion, the idolisation of objects, mythological and mystical motifs in daily life as well as their own religious identity, which – primarily in the case of female artists – often appears to be very much related to the body.

"Modern art in Indonesia is not particularly radical," explains performance artist Arahmaiani. "Few artists dare to address religion – and above all Islam – in this way. They unconsciously censor themselves." Arahmaiani's provocative work has drawn the ire of Islamic fundamentalists on more than one occasion. Her installation "Stitching the Wounds" displays the word "Allah" in outsized Arabic letters in the form of brightly coloured cushions, suspended from the ceiling or scattered invitingly on the floor.

"In many countries, Arabic scripture is immediately associated with repression and an unyielding form of Islam. But for me, the word Allah is synonymous with love – I aim to demonstrate the human face of religion," she says.

Apart from Arahmaini, only two other Indonesian artists have dared to feature Islamic symbols directly in their work. In his photo essay "Ka'bah", photographer Wimo Ambala Bayang documents replicas of Muslim sanctity in the preparatory centres for Indonesian Hajj aspirants, who come here to rehearse for the climax of their life's journey. Devoid of people, the high-definition panoramic images are in sharp contrast to the typical shots from Mecca – their simplicity is suggestive of the naivety of many Indonesian Muslims as they embark upon the journey of their lives.

Business instead of piety

Javanese artist Setz Legi takes the national political theme a step further in his installation "Berhala" (Idols), which groups various symbolic objects – including a fountain, a leafless tree and the cupola of a mosque – around a cube made out of black canvas reminiscent of the Kaaba in Mecca. 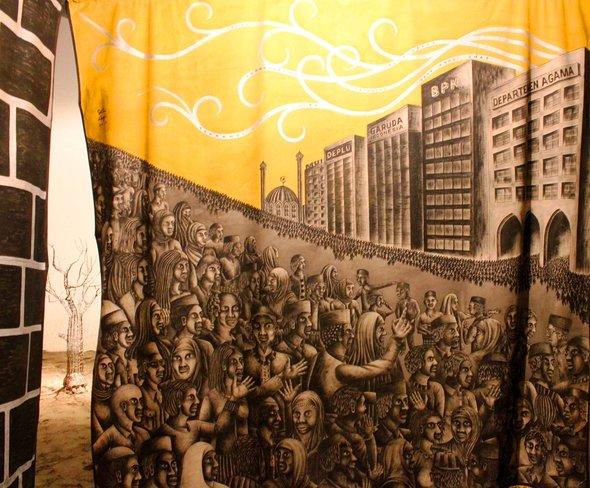 Setu Legi's installation "Berhala". "Although Islam does not permit idolatry, the Hajj and the objects venerated during this ritual have long become religious idols," says Legi, co-founder of the socially critical artists' collective Taring Padi

​​Inside the cube, a hollow-eyed mass of people storms the Indonesian Ministry of Religious Affairs, which allocates a limited number of places for the Hajj pilgrimage to Mecca every year – and earns a great deal of money in the process.

On the other side, an Arab sheikh rejoices at the stack of cash that comes his way as a result of this arrangement with Indonesia. The installation also displays a text dating from pre-Islamic times, in which the controversial Indian historian Purushottam Nagesh Oak supports among other things his theory that before the appearance of Mohammed, the Kaaba in Mecca had been a Hindu shrine.

"Although Islam does not permit idolatry, the Hajj pilgrimage and the objects venerated during this ritual have long become religious idols," explains Setu Legi, co-founder of the socially critical artists' collective Taring Padi. "The organisational framework of the pilgrimage now has more to do with business than with personal faith, in a system propped up by corrupt politics."

﻿National and religious identities in India

The theme of the Biennale was no less explosive for artists from this year's partner nation India, a country repeatedly shaken by religious conflicts. In his famous film trilogy "A Season Outside", "To Remember" and "A Night of Prophecy", Indian artist Amar Kanwar portrays in highly arresting fashion how state-sponsored and religious violence affects the daily lives and faith of ordinary people – whether it be on the heavily guarded border between India and Pakistan, or in the poor state of Gujarat, where some 800 Muslims and 250 Hindus died in religious unrest in 2002.

The photo performance series "Motherland" by Indian artist Pushpamala N. is also a radical depiction of how her country's national and religious identity are intertwined: In a cheap "bazaar studio setting", the artist herself poses as "Mother India", often on an equal footing with the goddess Durga. Sometimes she can be seen riding, smiling benevolently, on a plastic tiger – at other times a man in official uniform kneels in front of her holding his decapitated head in his hand.

In view of the limited resources that were available to artists in Yogyakarta and the inevitable dilution of content that occurs when art is produced for a globalized market, it was a shrewd decision to concentrate on a specific subject and one single partner nation.

The fact that Biennale organisers decided to go against the general North-South trend and choose a country on the same footing – in both a social and geographic sense – as well as select an explosive and pertinent subject such as religiosity, is not only evidence of their courage, but also a demonstration of great artistic foresight.

Home
Print
Newsletter
More on this topic
Indonesian Artist Arahmaiani: Sex, Religion and Coca-ColaArt and Islamism in Indonesia: When Creativity Is a Sin
Related Topics
All Topics
Date:
Mail:
Send via mail

END_OF_DOCUMENT_TOKEN_TO_BE_REPLACED
Social media
and networks
Subscribe to our
newsletter