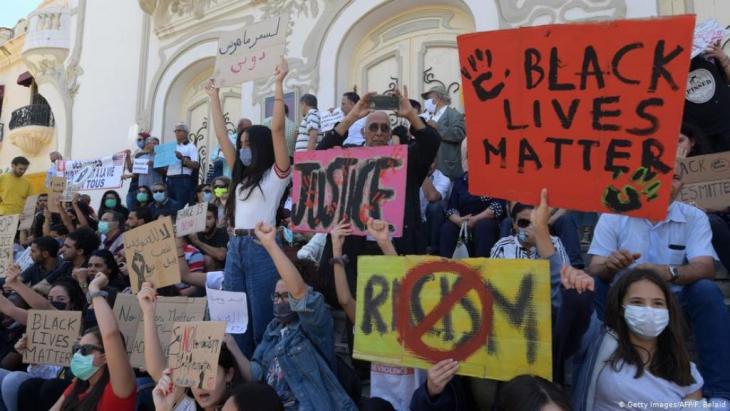 Are Arabs racists? Are Egyptians racists? A question that was once priority has quickly become submerged beneath those issues most relevant to our daily struggle today. Owing to the breadth of the subject, the sensitivity surrounding it and the difficulty of undertaking serious opinion polls in the Arab world, the jury would still appear to be out. Yet with the global wave of anti-racism sentiment triggered by George Floyd’s killing in the USA, it is a topic that needs to be addressed.

Let's start with a simple definition of the concept: racism is the belief that there are differences in the abilities and characteristics of people according to the colour of their skin. Sometimes it may be expressed as a distinction between different religious beliefs, such as when an Egyptian Muslim says that Egyptian Copts smell bad, meaning that this is in the biological make-up of all Copts. Sadly, this is something I have heard more than once.

Notwithstanding the grotesque nature, folly, and stupidity of the notion, racism has been present throughout Arab history; indeed, throughout human history. People have carved out great chasms to separate one race from another and they’ve filled them with liquid loathing, producing noxious fumes.

The cycle of hatred goes beyond skin colour and religious affiliation to include differences in sexual orientation, people with special needs, as well as other racial differences. I am reminded of a proverb by the Egyptian writer Ahmed Taymour: "If a one-eyed person looks up at the sky, he’ll spoil it" (i.e. a one-eyed person can only see imperfection and evil).

A constant throughout Arab history

The most brilliant of all Arab poets, Abu al-Tayyib al-Mutanabbi wrote a famous verse lampooning Abu al-Misk Kafur, the Ikhshidid vizier: "Don’t buy a slave without a stick to go with him .. …Slaves are filthy and ill-tempered". In this verse, he encapsulates the essence of racism brilliantly. The black Abyssinian slave, in this case Kafur the Ikhshidid vizier, is dirty, profane, ritually impure and with a nasty demeanour, so you have to hit him with the stick. This, then, was the nature of black slaves, according to al-Mutanabbi.

Al-Mutanabbi did not create this linguistic legacy out of nothing, nor was it merely an emotional flourish to ridicule the man in question. Rather, the racist system was well-established and firmly grounded. Slavery was an integral part of the socio-economic system of the Islamic state in which our poet lived. There was one Islamic doctrine for the master and another for the slave.

For instance, slaves didn’t attend the Friday prayer. And the wedding contract allowed slave widows and divorcees to marry after a period of waiting (‘idda) of two months, instead of four in the case of a free woman. A male slave could marry, with the permission of his master, two women, not four like a free man. Indeed, there was a comprehensive legal code in respect of slaves in the society in which al-Mutanabbi grew up, and the situation stayed like this until the twentieth century.

Thus, the social and legal system of the Umayyad and Abbasid states and their successors was one that clearly discriminated against people. Hence it was only natural that Arab countries would be the last to be compelled to end the slave trade and abolish such practices. Slavery was abolished in most countries in the 19th century; China was the last non-Arab country to pass a law making it illegal in 1909, which came into force in 1910.

In the Arab world, however, slavery was only abolished in Saudi Arabia in 1962, although it is said to have taken another seven years before the edict came into force. Slavery was outlawed in Yemen and Oman in 1970, while in Mauritania it persisted until 1981.

A number of Islamic scholars have even issued fatwas to the effect that abolishing slavery is a heresy in Islam. Prohibiting what is halal in Islam is not allowed (haram). This relates to the first verse of Surah al-Tahrim, the Prohibition chapter in the Koran: "O Prophet, why do you forbid what God has made lawful for you; to please your wives? God is Forgiving, Merciful."

From the second half of the 20th century onwards, most Islamic scholars have viewed the abolition of slavery positively, but the simple question remains: is there a single Islamic scholar who died before the 19th century who said we should abolish slavery? As far as I know, the answer is no. Here I will admit to something that I never have before, which is that my grandfather, who was born in 1899 and who raised me from the age of 5 after my mother’s death, owned a castrated slave (or eunuch). And his sisters owned an Ethiopian bondmaid. The slave trade was made illegal officially in Egypt in 1877, although it was only ink on paper until 1894. Slaves were not freed during that period; they remained the property of their masters until their death.

A racist system predicated upon the notion that some human beings are biologically inferior to others is not far from what we have at present. We are not talking here about ancient history; rather it’s something that existed until very recently. Indeed, it is likely that buying and selling slaves still takes place to this day in some Arab states. 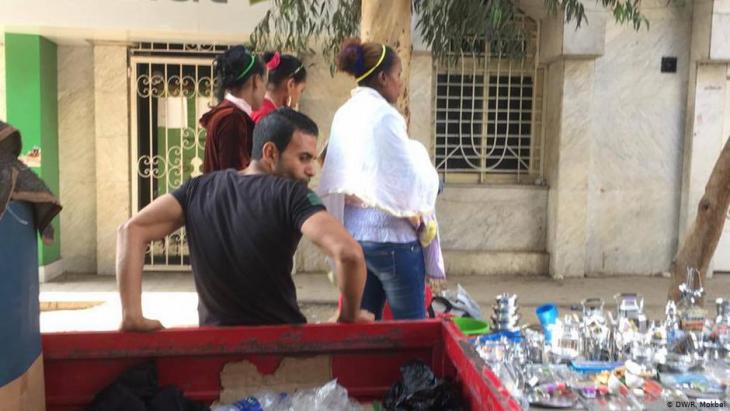 A manifest state of sustained violence: "The Arab world labours under a system which is intolerant of that which is 'other'. Addressing it will take a huge effort, much time and political will. It is up to us as individuals to make a start and confront our inner feelings of violence towards anyone we perceive to be different," writes Khamissi

It is reprehensible, but not unusual for a girl whose skin is dark or "brunette" as we say in Egypt, to hear racist comments from Egyptian men who are dark-skinned themselves. This is what African women face every day in the streets of my city. I will never forget my chats with African students at Senghor University in Alexandria where I supervised dissertations for master’s degrees. They would tell me how they suffered from racism in a city which, until half a century ago, would have been praised for the harmony enjoyed by the people of "the bride of the Mediterranean", as Alexandria was known.

Sadly, but not surprisingly, we don’t have a single Black movie star, after more than a hundred years of rich cinematic history in Egypt. And despite the scarcity of blonde Egyptian women, we find paradoxically that many of the biggest stars are indeed blonde like Maryam Fakhruddin, Nadia Lutfi and Mervat Amin.

In an interview on racism, the great director Yousry Nasrallah wrote on Facebook: "I won’t forget the trailer for the film 'Slaves' in Cairo's Cinema Radio in the seventies. Without going into the details, it was very irritating that none of the nude scenes involving black women were censored, whilst those involving white women were."

This is another level of racism on the part of the official agency of the Egyptian censor, whose staff couldn’t see that the bodies of African women could be a source of sexual temptation or lust; so much for their flawed perceptions of what should be censored. These women were there to be bought and sold like an ebony chair or bed, whilst the nude scenes of the white actresses were cut out by the censor as if they didn’t exist."

Take a stand against "othering"

This racist environment in our region allowed for the growth of hostile and antagonistic feelings towards anyone who differs from our sense of what is "normal" or "conventional". It goes beyond what the poet Ahmed Fouad Najm wrote about in his poem "Long live my people":

Between them there is no….

Getting to know each other and joining together

Where each community lives

Afraid of the other

Behind curtains and mesh shutters.

This is because the relationship between these different groups is not one of fear or hiding behind net curtains; rather, it’s one of hatred and violence. That is what compelled a girl like Sarah Hegazy to take her own life a few weeks ago, several years after having raised the rainbow flag, for which the Egyptian state decided at the time to lock her up for three months. After sustained harassment she was forced to emigrate to Canada. We face a manifest state of sustained violence, with examples that are too numerous to count.

In a study undertaken by Insider Monkey, three Arab states – Jordan, Saudi Arabia, and Lebanon – ranked among the eight most racist countries in the world. Despite the fact that I tend to doubt studies of this nature, I can see from personal experience that the Arab world labours under a system which is intolerant of that which is "other". Addressing it will take a huge effort, much time and political will, none of which is currently available.

It is therefore up to us as individuals to make a start and confront our inner feelings of violence towards anyone we perceive to be different.

Khaled al-Khamissi is a well-known Egyptian writer, author of several novels, university lecturer and cultural activist. In his novels "In the Taxi. On the Road in Cairo", "Noah's Ark" (both published in German translation) and "Shamandar", Khamissi dissects Egyptian society in the second half of the 20th century. His works have been translated into numerous languages. His first non-fictional work "2011" (title of the English translation) was published in 2014. His essays, published in Egypt and abroad, provide a comprehensive insight into his work as a political analyst and novelist.

Home
Print
Newsletter
More on this topic
Human rights and civil society in North Africa: Tunisia joins George Floyd protests to say 'no' to racismEmancipation and music: Black Tunisiansʹ bitter heritageInterview with Bakary Sambe: ''In the Arab World, we Africans are viewed as inferior Muslims''
Related Topics
Democracy and civil society, History of Islam, History of the Near and Middle East, Human rights, Multiculturalism, Racism | discrimination
All Topics

Abortions are illegal in Egypt unless they are necessary to save a married woman's life. But that doesn't stop local women from having one. Egyptian society needs to acknowledge ... END_OF_DOCUMENT_TOKEN_TO_BE_REPLACED

Food prices doubled, salaries halved, banks restricting withdrawals: Egyptians now have the same problems as the Lebanese. But if things get worse here, the fallout will be far ... END_OF_DOCUMENT_TOKEN_TO_BE_REPLACED

Giessen, Eichsfeld, Kusel, Berlin – cars bearing old German number plates are the latest trend on the streets of Cairo. Many Egyptians regard the discarded plates as chic. What ... END_OF_DOCUMENT_TOKEN_TO_BE_REPLACED

Egyptian Sufis have been on the defensive against the country's Islamists for decades. Meanwhile, interest in mysticism is growing among the young members of Cairo’s middle and ... END_OF_DOCUMENT_TOKEN_TO_BE_REPLACED

Chinese President Xi Jinping's visit to Saudi Arabia in December 2022 may have rattled Washington, but it simply highlighted the Arabs’ desire to diversify their foreign relations ... END_OF_DOCUMENT_TOKEN_TO_BE_REPLACED

END_OF_DOCUMENT_TOKEN_TO_BE_REPLACED
Social media
and networks
Subscribe to our
newsletter