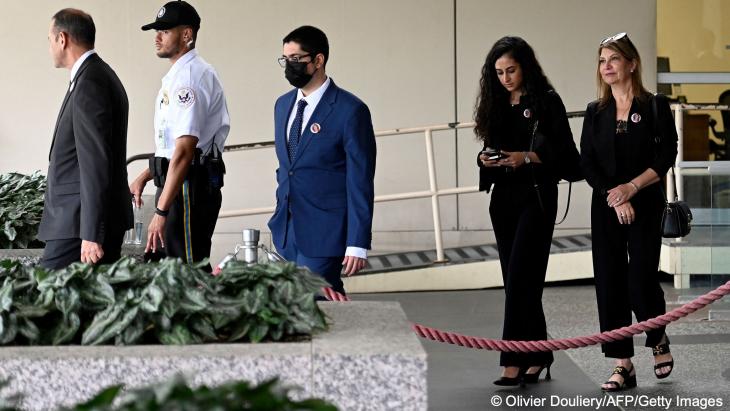 The family of slain Palestinian-American journalist Shireen Abu Akleh on Tuesday pressed Secretary of State Antony Blinken to demand accountability from Israel but the US administration balked at calls to open its own probe.

The top US diplomat invited relatives of the veteran Al Jazeera reporter, who was killed on 11 May as she covered an Israeli raid in the occupied West Bank, for a meeting in Washington after they unsuccessfully tried to see President Joe Biden on his visit to the region earlier this month.

"We are continuing to call for accountability and for justice for Shireen," Lina Abu Akleh, the journalist's 27-year-old niece, said outside the State Department after nearly an hour-long meeting with Blinken.

"If there is no accountability for Shireen's murder, then this in a way gives a green light for other governments to kill American citizens," she said.

Lina Abu Akleh, who was joined by the slain journalist's brother, said that Blinken acknowledged the family's concerns about a lack of transparency and promised "to establish a better channel of communication."

But she said he "did not commit to anything" on the family's calls for an independent US investigation into the death of the leading Palestinian journalist, who also held US citizenship.

The United States on 4 July released a statement saying Abu Akleh was likely shot by Israeli fire but that there was no evidence her killing was intentional, and that the bullet was too damaged for a conclusive finding.

The family demanded a retraction of the statement, which was based in part on US reviews of the separate Israeli and Palestinian probes.

Blinken, in a tweet after the meeting, said that Abu Akleh's "fearless journalism earned her the respect of audiences around the world."

"I expressed my deepest condolences and commitment to pursue accountability for her tragic killing," Blinken said.

But asked about the family's demands for a fresh US probe, State Department spokesman Ned Price pointed to the 4 July statement.

He said that the Israeli Defense Forces have "the ability to implement processes and procedures to avoid non-combatant casualties" and "to see to it that something like this cannot happen again."

Israel has angrily rejected suggestions it deliberately targeted a journalist. It initially said that Palestinian fire could have killed Abu Akleh, who was wearing a vest that clearly identified her as a reporter, before backtracking.

Israel says it is still probing her death, leading some Palestinians to allege a stalling tactic.

Blinken has publicly criticised Israel for using force at her funeral, when police grabbed Palestinian flags and pallbearers struggled not to drop her casket.

The family is also meeting US lawmakers who have been pressing for the FBI or other US agencies to launch an investigation into her death.

"If we allow Shireen's killing to be swept under the rug, we send a message that the lives of US citizens abroad don't matter, that the lives of Palestinians living under Israeli occupation don't matter, and that the most courageous journalists in the world, those who cover the human impact of armed conflict and violence, are expendable," Shireen's brother Tony Abu Akleh said in a statement before the meetings. (AFP)

Pictured above: The family of Palestinian-American journalist Shireen Abu Akleh, including her brother Tony Abu Akleh (left), her niece Lina Abu Akleh (2nd from right), and her nephew Victor Abu Akleh (3rd from left), leave the State Department in Washington, DC, on 26 July 2022, after meeting with US Secretary of State Antony Blinken.

END_OF_DOCUMENT_TOKEN_TO_BE_REPLACED
Social media
and networks
Subscribe to our
newsletter