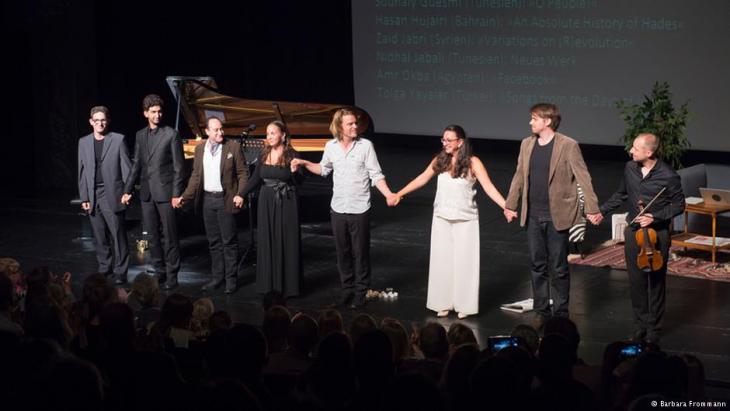 Six composers from five Arab countries translated their impressions of the Arab Spring into music, providing the pianist Seda Roder with material for her multimedia ″Songs of Spring″ performance, rich in hope and disappointment. By Gaby Reucher

"I'll just google the Arab Spring," says actor Laurenz Leky, who tonight is playing the role of an interested artist. On 17 December 2010, the revolution began in Tunisia, he tells the audience. To protest random police violence, a vegetable seller set himself on fire and unleashed the first mass demonstration. Corresponding video footage can be seen on the screen behind Leky.

Hope for the Arab Spring

"What does the 'Arab Spring' mean and how can we navigate through the overload of information to learn more about it?" For Turkish pianist Seda Roder, that was the central question during the multimedia piano evening titled "Songs of Spring," which was held during the Beethovenfest in the composer's birthplace, Bonn. This year's music festival is being held under the motto "Revolutions". "I didn't want to look back, at history, but rather to the future," says Roder. That's why she located six musicians from five Arab countries who have composed works about what the Arab Spring – the "Arabellion" – means to them.

The works of the two Tunisian composers, Nidhal Jebali and Souhaly Guesmi – both in their early 20s – convey a lightness. "They are young and hopeful," says Roder. They don't carry the bitterness of the past, she adds. Tunisia is the only country in which the so-called revolution led to a new democratic constitution.

But are Tunisians even part of the Arab world? Actor Laurenz Leky googles again. When he enters the word "Are Tunisians…" Google suggests a search question: "Are Tunisians good in bed?" 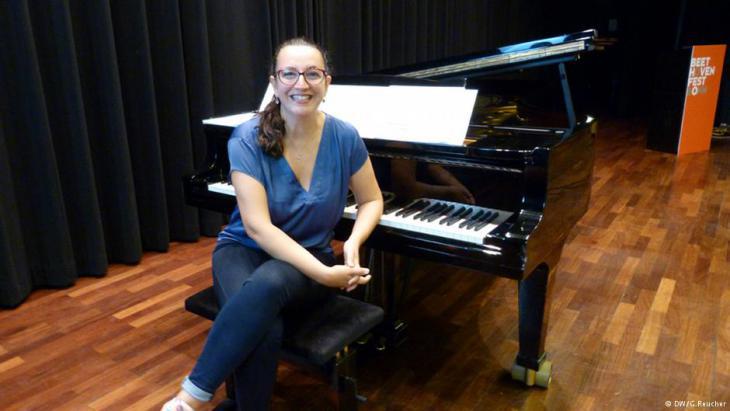 Turkish pianist Seda Roder produced the "Songs of Spring" piano recital at the Beethovenfest in Bonn. The evening focused on presenting musical impressions of the Arab Spring

The role of social media

By this point it's clear that Seda Roder, who was involved in planning the programme for this multimedia evening, is not just interested in showing various facets of the Arab Spring. She poses another critical question: how do we inform ourselves in the digital age? "Information that we access via search engines or social networks is modified according to our behaviour. We hardly receive any information that hasn't been filtered," she says.

Amr Okba from Egypt composed a work for piano, called "F.B.I. Facebook Information," that takes up at this point. The melody keeps coming to a halt and elements of the US national anthem break through with increasing clarity. His hope has been extinguished, he told Seda Roder, who worked closely with the six participating composers. The role of the Americans in the Arab Spring is something Okba criticises just as strongly as the information that's distributed via Facebook.

Social networks are both a curse and a blessing. Seda Roder used Google and her Facebook network to contact the six composers, some of whom had taught themselves or taken music lessons via Skype. That's how she reached Hasan Hujairi from Bahrain, who speaks to the audience in Bonn via Skype. "As an artist you're not allowed to talk about politics, religion or gender issues," he says, adding that the people had found a different language. 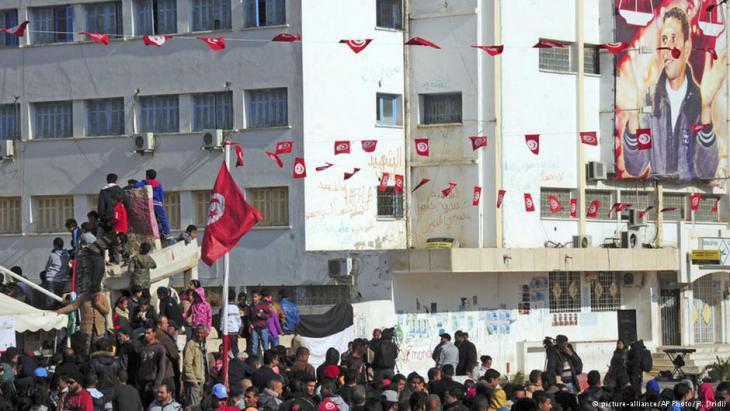 Anniversary of the Arab Spring in Tunisia: on the wall to the right a poster of the self-immolating greengrocer. Tunisia is the only Arab land in which the revolution led to a democratic constitution

They honk their car horns to a particular rhythm as a sign of protest, or they go to the roofs of their homes every night at a particular time and shout. "The police have banned honking," says Hasan Hujairi. The voices of protest on the roofs, however, could not be localised. "I integrated these sounds into my compositions." The honking rhythm, which Seda Roder pounds onto the piano lid, is one example.

Suffering and pain during the war in Syria

Images from the war in Syria then appear on the screen on stage. They have been compiled by Austrian media artist Tobias Hammerle: bombed houses, politicians giving speeches, people fleeing. At the end, there is a handshake in which one of the hands is that of a skeleton.

As complex as the war is, so is the music by Syrian artist Zaid Jabri. "Outside of his country, Zaid has become a superstar of modern music," says Roder. The South African poet Yvette Christianse wrote the text for his chamber music piece, "Variations on (R)evolution" – a text about the suffering and pain of war. It is sung by soprano Kristina Quintaba, who is accompanied by violinist Ekkehard Windrich.

Just after their performance, Seda Roder herself appears on screen. "What's it like in your country, Turkey?" asks actor Laurenz Leky. But Seda Roder isn't able to answer. The speakers have been turned off and then the picture disappears entirely. "After the Gezi Park movement, everyone thought that something would happen, but the opposite was the case," says Roder. Particularly after the recent coup attempt in July, criticism of the government was not tolerated and many have been sent to prison, including some of her friends. "Erdogan has turned citizens into civilian police, into spies. No one dares to say anything any more," she says. 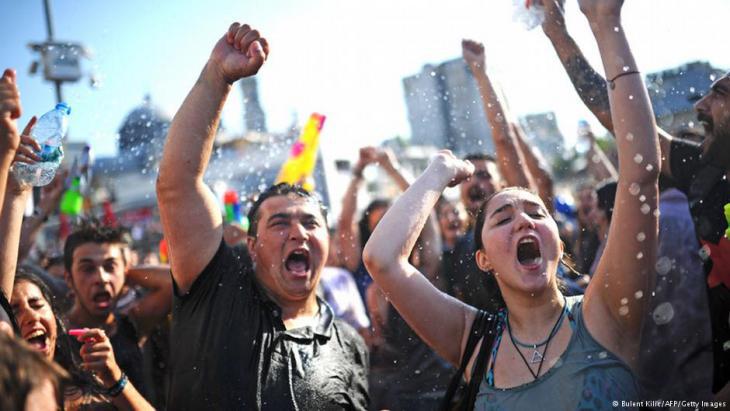 "After the Gezi Park movement, everyone thought that something would happen, but the opposite was the case," says Roder. Particularly after the recent coup attempt in July, criticism of the government was not tolerated and many have been sent to prison, including some of her friends. "Erdogan has turned citizens into civilian police, into spies. No one dares to say anything any more," she adds

Turkish composer Togoa Yayalar, a friend of Roder's, dealt with the Gezi Park demonstrations in his work, including the sounds of whispering voices and scurrying feet. After his studies in Boston, he returned to Turkey in order to train other classical composers, which is currently not an easy undertaking in Turkey. Most composers live abroad – including Roder, who has made Austria her second home. "Making music in these countries is difficult and risky," she says.

During the summer, Seda Roder travelled to Turkey. "For the last time, for now," she says, clearly emotional. Like other musicians, she has also received death threats. For her, it's become all the more important to introduce young Arab composers to the European audiences. "It sounds banal," says Roder, "but music connects people."

In Doha, Arabs from Morocco, Tunisia, Egypt and Algeria are gathering to celebrate the first ever FIFA World Cup to be held on Arab soil. The criticism from Europe? Over the top, ... END_OF_DOCUMENT_TOKEN_TO_BE_REPLACED

November 2022 sees the Arab world firmly in the spotlight with the COP27 in Egypt and the FIFA World Cup in Qatar. Public trust in MENA governments is weak, thanks to their ... END_OF_DOCUMENT_TOKEN_TO_BE_REPLACED

Palme d’Or winner "Boy from Heaven" is a classic crossover film in which cultural elements are mixed together in haphazard and random fashion. Shady Lewis Botros bemoans the ... END_OF_DOCUMENT_TOKEN_TO_BE_REPLACED

COP27 in Sharm el-Sheikh is turning into a PR disaster for Egypt’s military regime. Instead of praise for the host, the news is full of solidarity for imprisoned activist Alaa ... END_OF_DOCUMENT_TOKEN_TO_BE_REPLACED

END_OF_DOCUMENT_TOKEN_TO_BE_REPLACED
Social media
and networks
Subscribe to our
newsletter