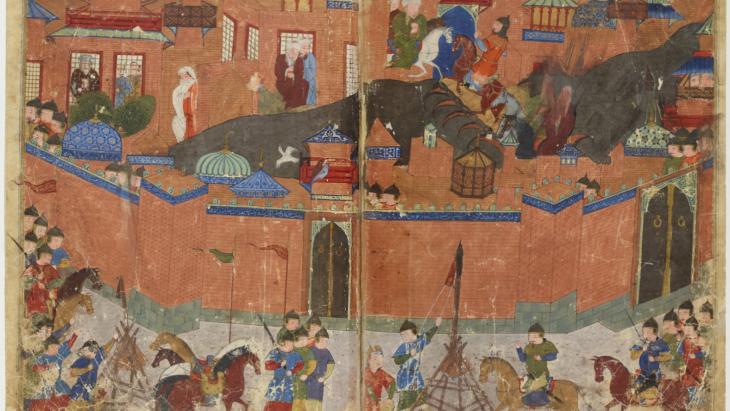 Ahmed El Shamsy's "Rediscovering the Islamic Classics" examines how a handful of reformist editors and intellectuals in the late 19th and early 20th centuries harnessed printing press technology to save a rich body of classical Islamic texts from the brink of extinction. By Muhammed Nafih Wafy

When Hulagu's army sacked Baghdad in 1258, unleashing rampages of pillage and murder, one of the precious treasures they ransacked were the books of the House of Wisdom known as the Grand Library of Baghdad, arguably the greatest repository of books in the Middle Ages.

According to a popular fable, the Tigris River ran black with the inks of manuscripts the marauding nomads dumped into it. The Mongol invasion triggered the fall of the "golden age" of Islam and set the rich Arabo-Islamic intellectual tradition on a downward trajectory.

However, several great luminaries of the tradition lived during and after the Mongol invasion, and despite the destruction of the Baghdad library, a huge volume of Arabic manuscripts survived, preserved in other libraries across the Abbasid world. 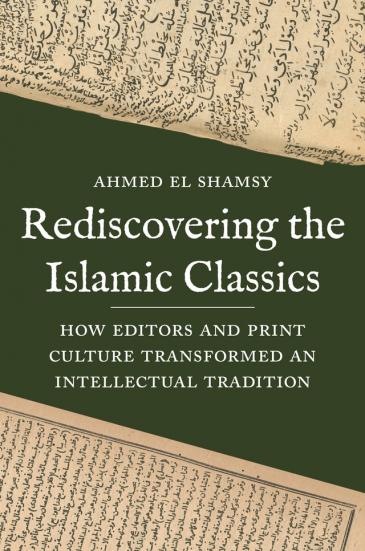 According to Princeton University Press, this is the first wide-ranging account of the effects of print and the publishing industry on Islamic scholarship. In it, Ahmed El Shamsy "tells the fascinating story of how a small group of editors and intellectuals brought forgotten works of Islamic literature into print and defined what became the classical canon of Islamic thought"

But from the 14th until the 19th century, various other factors contributed to a massive loss of those manuscripts, including titles we still consider as classics in the canon of Islamic thought today.

One of the reasons was that these centuries saw the vibrant Islamic intellectual tradition being gradually replaced by an era of textual scholasticism and epistemological esotericism. In addition, a lack of preservation techniques, the delay in introducing printing technology and a massive hunt for Islamic classics by Orientalist scholars who trafficked and sold them for hefty sums to private collectors and libraries in the West accelerated the extinction of many pre-modern classical texts.

Had it not been for the painstaking efforts of a small group of intellectuals in the 19th and early 20th centuries to hunt down the remaining manuscripts and republish them in large numbers, the Islamic world would have lost a major chunk of its precious classical works. This initiative was expedited by the introduction of the printing press to the Arab world, which helped the reformers in their historic venture.

Ahmed El Shamsy's Rediscovering the Islamic Classics: How Editors and Print Culture Transformed An Intellectual Tradition chronicles the fascinating stories of those reformists and their remarkable contributions to the resurgence of classical Arabo-Islamic scholarship.

These intellectuals – who included some of the most important reformers of the time such as Muhammad Abduh, Tahir al-Jaza'iri and Muḥammad al-Shawkānī, among others – worked hard to bring the forgotten works of Islamic literature into print and harnessed them for their agendas of religious reform.

In the opening chapters, El Shamsy examines how the Islamic world ignored its rich heritage at a time when European libraries had an insatiable appetite for Islamic manuscripts, and Orientalist scholars were engaged in reconstructing Islamic scholarship.

He then goes on to portray the hard work and dedication of the reformists in rediscovering the forgotten manuscripts and printing them in bulk from the late 19th century onwards. As a result, the classical works that had been sidelined and ignored throughout the "postclassical" period started to emerge in large numbers in academic and scholarly discourses, sparking off a revival and reformation of Islamic scholarship across the region.

The manuscripts to which the reformers helped give a new lease of life included some of the pioneering works in the Arabo-Islamic canon such as al-Sibawayhi's eighth-century grammar, al-Shafi's ninth-century legal treatise, al-Tabri's voluminous ninth-century exegesis of the Koran, al-Ashari's tenth-century survey of Islamic theology, al Makki's tenth-century Sufi manual and Ibnu Khladun's fourteenth-century sociology of history, to name but a few.

Most of these works were scarce and difficult to find in the 19th century, when Islamic scholarly discourse revelled in "dense technical commentaries on earlier works", typically written centuries after the original works' compositions. This trend in textual orthodoxy, which reigned supreme in the Islamic world after the 16th century, restricted scholarly discourse to a handful of popularised texts. Scholars of that time chose to confine themselves to the textual hairsplitting of those commentaries, as well as their glosses and footnotes, while the originals were left to gather dust or to be appropriated by libraries in the West. 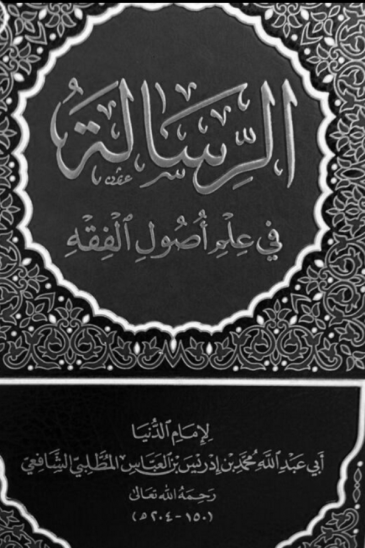 A modern print of al-Shafi's ninth-century legal treatise, Risala, a seminal work on the principles of Islamic jurisprudence. According to Ahmed El Shamsy, the works of al-Shafi, a ninth-century Muslim theologian, writer and scholar, were among the manuscripts to which reformers gave a new lease of life

Major works written by the founders of the various schools of Islamic law, theology, philosophy, linguistics, Sufism and historiography were therefore consigned to oblivion. And this was compounded by a growing esoteric trend that promoted spiritual illumination as the superior form of acquiring knowledge. The ignorance of the Islamic world of its own classical heritage was coupled with an underfunded and inadequate system of preserving, maintaining and securing manuscripts.

The reformists therefore had to overcome formidable obstacles, which involved marshalling an array of philological, organisational and financial resources as well as considerable time and commitment. They had to locate and obtain manuscripts, piece together complete works from scattered fragments, decipher texts in spite of errors and damage and understand their meaning without recourse to adequate referenced material, etc.

El Shamsy gives a fascinating account of how they overcame these challenges by helping build institutions and developing practices, as well as adopting modern systems of editing, publishing and cataloguing.

Their painstaking efforts opened up the narrow postclassical tradition into a broad literature of printed, primarily classical works, which we today consider the essential cannon of Islamic texts, bringing about a great transformation of the Arabo-Islamic intellectual tradition.

Inspiring story of the hunt for a lost Shafi classic

One inspiring story that El Shamsy recounts is that of Ahmed Bey al-Husayni, an Egyptian lawyer who embarked on a laborious hunt for the largely forgotten foundational works of the Shafi school of law. The result was a 24-volume work titled "Murshid al-anam li-birr umm al-imam", an exhaustive commentary on Imam al-Shafi's magnum opus, "al-Umm".

He also arranged and financed the publication of al-Umm, a 17-volume book which came out between 1903 and 1908. During the two centuries before its resurrection by al-Husayni, al-Umm had been completely marginalised and ignored, like many other classical works. Even Shafi jurists saw absolutely no need to have read al-Shafi's own words in order to be considered experts in their field.

El Shamsy writes that the revival of classical literature was part of a broader constellation of sociocultural changes that has often been referred to as the nahdha (lit.: renaissance) in the Islamic world. He contends that the renaissance in the Islamic world was not about rejecting the Arabo-Islamic intellectual tradition wholesale in favour of imported modernity, but that the reformers drew on the classical tradition in order to undermine the postclassical one, which they decreed as restrictive and ossified.

Musicians from Morocco to Iraq have been crossing paths at the Oriental Summer Academy in south-western Germany for ten years. Matthias Wagner, who founded and directed the ... END_OF_DOCUMENT_TOKEN_TO_BE_REPLACED

The Iran-Iraq War was one of the deadliest military conflicts ever seen in the Middle East. The eight-year-long conflict, which saw the use of chemical weapons, killed thousands ... END_OF_DOCUMENT_TOKEN_TO_BE_REPLACED

The rise of liberation movements in the Arab World during the 20th century brought with them an array of complimentary works from the creative sector. Sultan Sooud Al Qassemi ... END_OF_DOCUMENT_TOKEN_TO_BE_REPLACED

Ronya Othmann's novel "Die Sommer" (The Summers) tells the story of Leyla – the daughter of a German and a Yazidi Kurd – who visits her grandparents' Yazidi village in northern ... END_OF_DOCUMENT_TOKEN_TO_BE_REPLACED

When hundreds of thousands of refugees crossed Germany's borders in 2015, Chancellor Angela Merkel promised: "We can do it!" This is the story of how Iraqi refugee Raisan Hameed ... END_OF_DOCUMENT_TOKEN_TO_BE_REPLACED

In the aftermath of the devastating explosions in Beirut, French President Emmanuel Macron is styling himself as Lebanon's saviour. Ultimately, however, the success of his efforts ... END_OF_DOCUMENT_TOKEN_TO_BE_REPLACED
Author:
Muhammed Nafih Wafy
Date:
Mail:
Send via mail

END_OF_DOCUMENT_TOKEN_TO_BE_REPLACED
Social media
and networks
Subscribe to our
newsletter