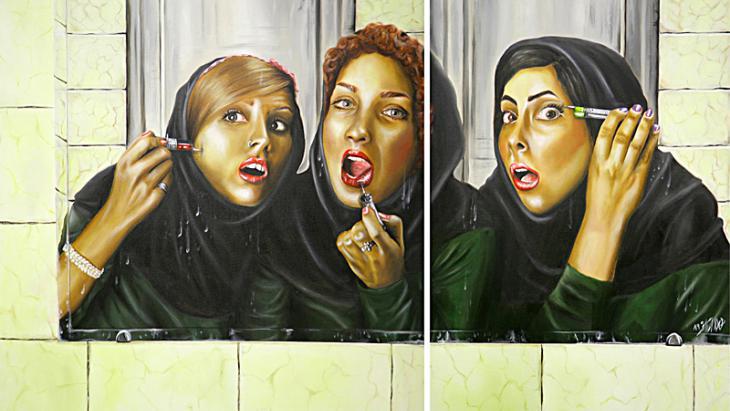 The agony and the allure

Written when the author was only 19, Alexandra Chreiteh's first novel "Always Coca-Cola", focuses in a highly entertaining way on how three young friends in Beirut are affected by Western commercialisation and contemporary beauty ideals. By Volker Kaminski

The most important piece of furniture in Abeer's room is the mirror that hangs on her wall. The first hour of every day is spent in front of it, assiduously scanning her face for any new lines and anxiously examining her skin for tell-tale signs of cellulite advance.

She yearns for a mirror image that will reflect the notion of ideal feminine beauty, a wish that her diminutive stature and overly dark skin are enough to deprive her of.

Her friend, Yana, the star model in a Coca-Cola billboard advert, is the living embodiment of Abeer's ideal, and the comparison between the two is one with which Abeer is daily confronted as she gazes into her mirror. As fate would have it, her friend's image appears alongside her own, reflected from a billboard on the street outside her window.

This is not to say that Abeer is excessively vain. She comes from a traditional Lebanese family and studies at the American University in Beirut. Her friend, the daughter of Romanian-German parents, is much less deeply rooted in Beirut society, and consequently has a more relaxed attitude to life, an attitude that helped her to get the modelling job. 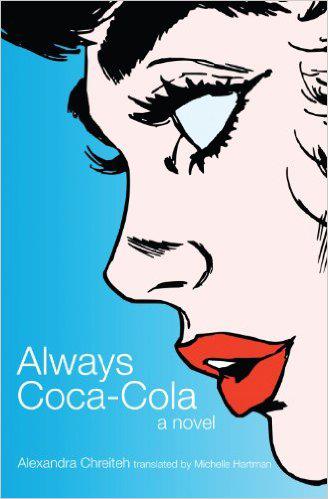 Alexandra Chreiteh's "Always Coca-Cola" is a multi-layered coming-of-age tale. Three friends in Beirut, at the outset of their university and professional careers, find themselves torn between the demands of a Western lifestyle and the expectations placed upon them by their traditional patriarchal home culture

Yana's permissive lifestyle is a constant source of provocation for Abeer even though she secretly tries to emulate her model friend. Abeer is made aware of alternative options to her own tradition-dictated lifestyle and Yana's supposedly more modern attitudes by fellow student Yasmine, who wears her hair defiantly short, spends her free time kickboxing and cares little about both society's rules and current notions of ideal beauty.

Most of the action in this highly entertaining novel revolves around Abeer. Yet the light, amusing tone of the narrative is deceptive: the narrator skilfully strings together multiple motifs that reflect the expectations and disappointments of the young woman.

Abeer appears trapped in an web of brand names: Coca-Cola, Always (sanitary towels), Starbucks and others constantly influence and determine her behaviour. The lives of the young women are very much dominated by the media, by mass advertising and by the dreams inspired by certain kinds of video clips, usually featuring palm tree oases and perfectly styled singing dancers.

Beneath this web of entertainment and commercialisation runs an undercurrent of violence. There is much mention of blood – menstrual blood, the bloody injuries sustained during kickboxing or the pain experienced by Yana while waxing away her body hair at the beauty salon.

Abeer herself comes face to face with brutal violence when her employer rapes her in his office. Instead of reporting the incident, however, she is consumed by guilt and by the "scandal" of a possible "dishonourable" pregnancy. She then begins to look upon her own body as some men do – seeing herself as a spent rose, her bloom gone. In her desperation, she even considers having an operation to restore her hymen as a way of reordering her life, which she describes as having been scattered all around her like lots of little jigsaw pieces. Fortunately, her non-conformist friend Yasmine is on hand to dissuade her from going through with this plan.

Chreiteh has a nice feel for dramatic situation comedy, albeit with a dark background. At times the comedy ventures into the realms of the grotesque, and the already high pace of the narrative borders on the frenetic.

Despite the light-hearted almost frothy nature of the narration, this is an extremely adept and skilful first novel. The narrator succeeds in making us aware of the very real fears that confront the protagonist daily in a world that on the one hand bombards her with alluring yet delusive images (and songs) of an enticingly glossy world and on the other presents her with traditional values and identity patterns that are hardly a viable alternative for the modern women she is.

"Always Coca-Cola" introduces us to a young and highly gifted author who with a wonderful lightness of touch, holds up a mirror to the overly commercialised society in which we all live – West and East.

Volker Kaminski
© Qantara.de 2015
Translated from the German by Ron Walker

The rollout of coronavirus vaccines in the Middle East and North Africa is already taking place on a massive scale, with the United Arab Emirates leading the way. Nevertheless, ... END_OF_DOCUMENT_TOKEN_TO_BE_REPLACED

A childhood and youth in Beirut, a life lived between Lebanon, Switzerland and Germany, and a unique voice in Arabic-language literature: "Beirut für wilde Mädchen" sees Lebanese ... END_OF_DOCUMENT_TOKEN_TO_BE_REPLACED

Surging coronavirus cases in many parts of the world have overshadowed the start of this year's Muslim holy month of Ramadan, with festivities once again curtailed by contagion ... END_OF_DOCUMENT_TOKEN_TO_BE_REPLACED

German Middle East analyst Guido Steinberg and television journalist Ulrich Tilgner have both published new books on the conflicts in the Middle East. Their analyses and their ... END_OF_DOCUMENT_TOKEN_TO_BE_REPLACED

The famous temples of Baalbek, the ancient Heliopolis in Lebanon, are one of the largest Roman religious sites in the world and a World Heritage Site. The app "Baalbek Reborn: ... END_OF_DOCUMENT_TOKEN_TO_BE_REPLACED

The Syrian war has moved through many phases and included a number of changing actors. But one aspect has remained constant throughout: the Assad regime is using the conflict to ... END_OF_DOCUMENT_TOKEN_TO_BE_REPLACED
Author:
Volker Kaminski
Date:
Mail:
Send via mail

END_OF_DOCUMENT_TOKEN_TO_BE_REPLACED
Social media
and networks
Subscribe to our
newsletter