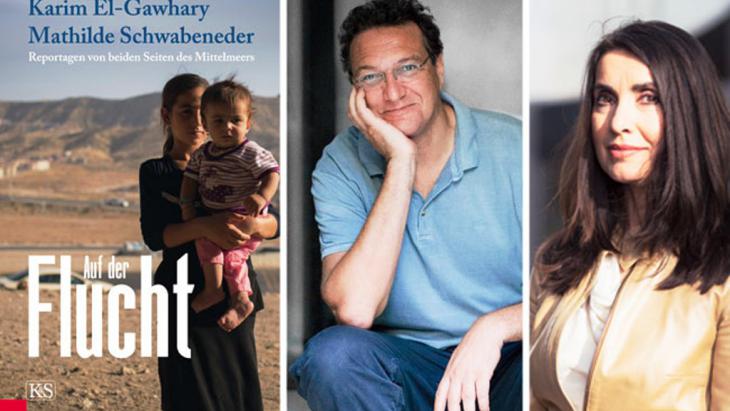 Fleeing war, terror and rape, they come from Syria and Eritrea, Iraq and Somalia. Almost every one of them has been through terrible experiences. The media call them a ″wave of refugees″ or a ″tide of refugees″. But every refugee is an individual with their own specific and often traumatic story. No one chooses such a fate. Each one of them had a life before they left their homes, a life with wishes, hopes and plans. As banal as they may seem, these facts are often drowned out in the increasingly anxious reporting.

Karim El Gawhary, a television correspondent in Cairo and his Italian-based colleague Mathilde Schwabeneder have written a book that challenges all of us to take a closer look and find more compassion and solidarity for refugees. Entitled ″Displaced – reports from both sides of the Mediterranean″, the book brings together nine pieces by the two journalists, telling real-life stories of displacement and refugees from various perspectives.

The sheer struggle for survival

Many of the stories and experiences are so terrible that the reader chokes up while turning the pages. Hosna, a young woman whose ethnic group is struggling with the consequences of war, violence and climate change in the Sudanese Nuba Mountains, gives birth to her child in indescribable conditions.

Soha, a Syrian woman, makes her way from her destroyed home to Egypt with her four daughters, in the hope of finding a way from there to salvation in Europe. When she and her daughters put out to sea from Egypt′s Mediterranean coast along with 160 other Syrian refugees, the boat sinks after only a few miles.

Mother and daughters struggle to stay alive for hours in the cold water, but Soha can′t keep hold of three of the small girls and they go under one after another. Only eleven-year-old Sara survives and is eventually rescued along with her mother. 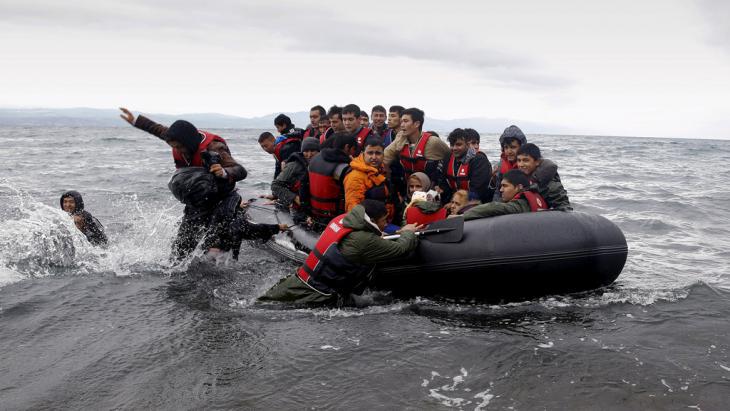 Born in the wrong place: the fact that most people in Europe don′t need to flee their homes at the moment, living in comfortable affluence, is not due to personal merit, but is simple good fortune – ″the mercy of the right birthplace″, as Karim El-Gawhary calls it

A young woman from the devastated Syrian city of Homs thinks she and her children are in safety, when the car they were escaping in comes under fire. A bullet ricochets into the head of her youngest son, not even two years old. His ten-year-old brother is sitting right next to him. His injuries are not fatal but he has not spoken a word since.

″A form of therapy″

These and other stories rob even experienced journalists of their sleep. ″In that respect, the book is also a form of therapy,″ writes Karim El Gawhary in the introduction. ″By telling these stories to others, we are processing them ourselves.″

El Gawhary and Schwabeneder list the shocking facts: some 60 million people around the world are currently displaced, more than ever before. The largest group by far is from Syria. Up to 2011, over 22 million people lived in the country, considered the cradle of European civilisation.

Today more than four million Syrians are living abroad, while a further 7.5 million have lost their homes and their means of survival within the country. Over half of the population – every second Syrian – is displaced, most unable to return because their houses and villages simply no longer exist. And that′s not all: life expectancy has fallen drastically in Syria over only four years, by two whole decades – from 75.9 to 55.7 years.

″Twenty years less on average per person: would you stay in a country like that with your family or would you pack your cases too?″ is Karim El Gawhary′s provocative question.

El Gawhary and Schwabeneder report directly from tents, reception camps and emergency accommodation. They give detailed descriptions of the often unbearable, life-threatening conditions. The questionable way some Western media deal with refugees is disturbing. In winter 2014, when Syrian babies were freezing to death in snowed-in refugee camps in Lebanon because the makeshift tents could not be heated, many editorial offices preferred to report on a snowstorm in New York.

Anyone can become a refugee

Another thing the book shows is that anyone can become a refugee. It is enough to be born and grow up in the wrong place. The fact that most people in Europe don′t need to flee their homes at the moment, living in comfortable affluence, is not due to personal merit, but is simple good fortune – ″the mercy of the right birthplace″, as Karim El Gawhary puts it.

Alongside many terrible fates, the book also gives us signs of hope and tells stories of people′s pragmatic ability to cross borders and deal with new situations. In Großraming, an idyllic Austrian village, the locals are initially horrified to hear that a refugee home is to be built. Many people protest against the plans.

But business acumen, pragmatism and a pinch of solidarity eventually make the majority change their minds. The determined mayor and a priest ask the local people to take the chance, not to close themselves off but to roll their sleeves up and welcome the refugees.

What seems impossible to begin with succeeds in the end. More than fifty refugees from Iraq, Syria and Afghanistan are received in Großraming. The Catholic women′s group organises donations, pensioners give children German lessons, the village society develops a whole new dynamic.

More and more inhabitants of Großraming realise that the refugees aren′t necessarily a threat, that they can enrich the village and its community. The highlight is a Christmas church service where a Muslim Syrian reads a passage from the Koran about the prophet Jesus. Yet despite the new openness, not everything in Großraming is sweetness and light. Many of the villagers have noticed that the state is leaving them alone with their volunteer effort for the refugees.

The struggle with the authorities is lengthy and slow-moving. And the volunteers are often not prepared for the horrific stories many refugees tell them. Nevertheless, people are proud of what they′ve achieved. ″The world has come to Großraming,″ says the mayor.

Despite right-wing parties trying to win voters by smearing refugees and raising fears, the refugee question will remain one of the major challenges of the coming decades.

El Gawhary and Schwabeneder′s book comes at just the right moment, enabling openness and empathy for refugees – the most important prerequisite for tackling that challenge.

Education for girls and women is still possible in Afghanistan, says Reinhard Eroes of the Kinderhilfe Afghanistan initiative. In interview with Elisa Rheinheimer, he talks about ... END_OF_DOCUMENT_TOKEN_TO_BE_REPLACED

A lawmaker in Pakistan's rugged northwest was sipping tea with voters when his phone chirped to life – the Taliban were calling with a demand for 'donations'. "We hope you won't ... END_OF_DOCUMENT_TOKEN_TO_BE_REPLACED

Cries of "Benghazi!" still resonate across the USA ten years after a deadly terrorist attack in Libya killed the U.S. ambassador and three other Americans. Ethan Chorin re-tells ... END_OF_DOCUMENT_TOKEN_TO_BE_REPLACED

Sufism has fluid boundaries. Just like Islam, Sufism is inconceivable without its late antique roots. Then again, it has also exerted an influence on Hinduism. Moreover, the Sufic ... END_OF_DOCUMENT_TOKEN_TO_BE_REPLACED

Journalist Waslat Hasrat-Nazimi was forced to flee Afghanistan with her family as a child and grew up in Germany. To mark the publication of her book "The Lionesses of Afghanistan ... END_OF_DOCUMENT_TOKEN_TO_BE_REPLACED

Just as the Islamic Revolution fundamentally changed Iran 43 years ago and had an impact far beyond the country's borders, the current wave of protests sweeping the country is set ... END_OF_DOCUMENT_TOKEN_TO_BE_REPLACED
Author:
Martina Sabra
Date:
Mail:
Send via mail

END_OF_DOCUMENT_TOKEN_TO_BE_REPLACED
Social media
and networks
Subscribe to our
newsletter