For the first time, an imam has joined the debate on the future of Islam in Europe with his own publication. Grüß Gott, Herr Imam (Hello, Mr Imam) is a remarkable book that shows how Islam and western democracy can be compatible. Claudia Mende read the book

For the first time, an imam has joined the debate on the future of Islam in Europe with his own publication. Grüß Gott, Herr Imam (Hello, Mr Imam) is a remarkable book that shows how Islam and western democracy can be compatible. Claudia Mende read the book

​​Benjamin Idriz is not unknown in Germany. His mosque in Penzberg to the south of Munich has for years enjoyed a reputation for being transparent and open. The defining characteristics of the mosque led by the imam from Macedonia are the fact that sermons are also delivered in German and that it has a public kindergarten and library and maintains contact with other religious communities, schools and institutions.

Idriz regards his project for a "Centre of Islam in Europe, Munich," which includes an academy for the instruction of imams, as his contribution to a genuinely German Islam, one that no longer requires endorsement from the nations where Muslims originate.

But Idriz has also evoked controversy. Despite years of effort by the Islamic Forum Penzberg, the Bavarian Office for the Protection of the Constitution categorised the mosque as "extremist" in its annual report. The authority says this is because the mosque maintains contacts with the Milli Görüs organisation, which had been under investigation for "support of terrorist organisations" among other things.

The investigation into Milli Görüs has since been shelved. But despite this, appeals against the assessment of the Bavarian Ministry of the Interior brought to the Bavarian Administrative Court by the Islamic Forum Penzberg have so far been in vain. The mosque has, however, been told that it may be re-assessed for the 2011 report.

Political parties in the Munich city assembly, Christian churches and the Jewish community in Munich continue to support the imam. It was this conflict with the Bavarian Ministry of the Interior that motivated Idriz to publish his vision of a European Islam in book form.

Literal interpretation of the Koran: the root of Islam's stagnation

Idriz does not beat about the bush. He makes a distinction between Islam as it was practised by Muhammad and the interpretations of future generations. For him, the faith of Muhammad has a universal character with values such as love, tolerance, respect and justice. In addition, it has the potential to adapt to every era and place. According to Idriz, however, following the death of Muhammad, this revelation was rapidly dogmatised and used for political ends. 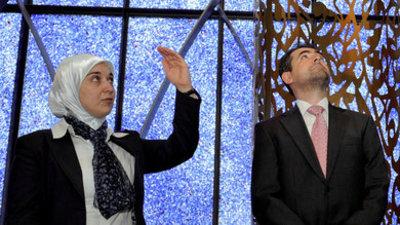 In favour of a modern, progressive image of Islam and against the traditional customs of conservative clerics: Benjamin Idriz (left) and Gönül Yerli, vice-director of the Islamic Forum at the Penzberg mosque

​​Legal provisions were soon declared immutable by several scholars, although they were actually bound up with their temporal and historical context, and are, for this reason, regarded as problematic from a contemporary point of view.

He sees this literal interpretation of the Koran as one of the main reasons for the stagnation of Islam, because in his view, such provisions need to be constantly revised. He criticises the religious perception of many Muslims, which is characterised "by traditional customs, the teachings of traditional spiritual leaders and ideas that have in the meantime lost their currency." Archaic punishments in cases of apostasy, adultery, forced marriages and honour killings are described by Idriz as a religious cloak for "stone age customs" in the countries where some Muslims originate.

For example, Idriz views the veil and the burqa as a contradiction to the universal message of Muhammad. He believes that a modern take on Islam would see women being allowed to assume senior leadership positions at the mosque. Idriz does not provide answers to all the questions being posed in the discussion about Islam, but he makes it absolutely clear where developments should be heading.

Moving towards a European Islam

Despite Idriz's pro-equality stance and his commitment to the principle of a liberal democracy, the mosque community he leads is under observation by the Bavarian Office for the Protection of the Constitution

​​Idriz is inspired in his ideas by the multi-ethnic and multi-religious societies of the former Yugoslavia. In Bosnia in particular, where Islam had to find a place for itself in the Austro-Hungarian Empire in the nineteenth century, models for a European Islam were developed early on. Idriz draws on the ideas of the Bosnian theologians involved in this development, for example Husein Djozo (1912–1982).

This has met with heavy criticism, because according to the German news magazine Focus, Djozo served as imam for the Waffen-SS in what was known as the Handchar Division. Djozo's stance on a contemporary interpretation of Islam that is critical of tradition is not disputed by academics.

It is beyond question that Djozo devised theoretical foundations for the existence of Bosniak Muslims in a religious-pluralist context, and this is exactly what Idriz bases his ideas on. The fact that the role of Bosnian Muslims during the Third Reich has not yet been properly dealt with in Bosnia itself and in research in general is certainly an omission.

But it is not an omission that can be blamed on Idriz. With his book Grüß Gott, Herr Imam, Idriz has presented a courageous work that makes an important contribution to the integration debate in Germany.

Bosnia's Multiethnic Denominations
Interreligious Dialogue for Reconciliation
The peaceful coexistence of Christians, Muslims, and Jews in Bosnia-Herzegovina has not been a simple matter in the aftermath of the war in the 1990s. Today, however, there are several interreligious dialogue initiatives, many sponsored from abroad. Mirjana Dikic reports

END_OF_DOCUMENT_TOKEN_TO_BE_REPLACED
Social media
and networks
Subscribe to our
newsletter