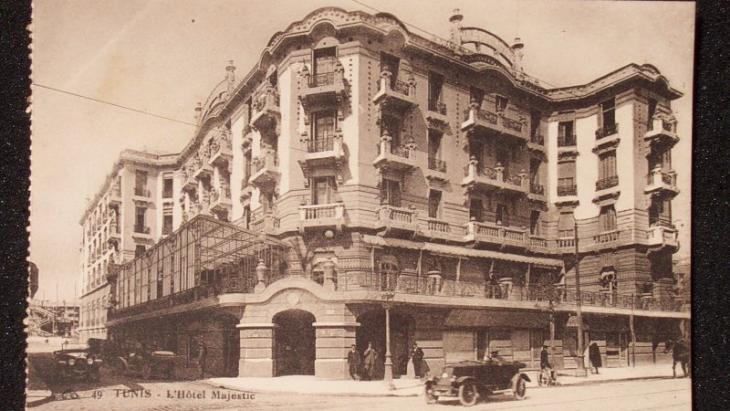 With "Piccola Sicilia", Daniel Speck proves himself to be a great storyteller and intercultural bridge builder. This family saga also spotlights a little-known chapter of Tunisian history: the German occupation of the country in 1942/1943 and the fate of Tunisia's Jews. By Martina Sabra

The colonial-influenced New Town with its Great Synagogue, which opened its doors in 1937, and the beautiful Hotel Majestic, which dates from 1911; the Italianate coastal suburb of La Goulette with its Catholic church and the Madonna of Trapani; the Arab Old Town (Medina) with its winding alleyways and eighth-century Zitouna Mosque ... all these places, which are dotted in and around Tunis, feature largely in Daniel Speck's novel "Piccola Sicilia" ("Little Sicily").

The background story is set, not in Tunisia, but in southern Italy: 300 kilometres due north, in present-day Sicily. Nina, a young archaeologist from Berlin, is taking part in an underwater exploration project. Immediately after arriving on the island, she meets 70-year-old Joelle from Israel.

The women's encounter is no coincidence. Nina is looking for her grandfather Moritz, who went missing in World War Two; Joelle claims to be one of Moritz's daughters. Who was this young frontline soldier and cameraman from Berlin, who had clearly been leading a double life? 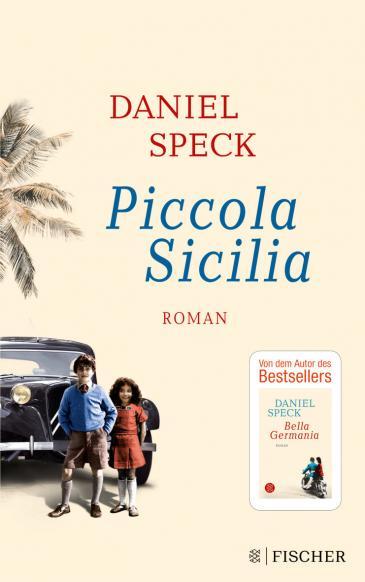 Against the backdrop of the Nazi occupation of Tunisia during the Second World War, Daniel Speck tells the extraordinary love story of German soldier Moritz Reincke and chambermaid Yasmina. The story is complicated because Yasmina is Jewish. She is also already madly in love with another man: the hotel pianist Victor, also a Jew. Both Yasmina and Victor are in great danger because the German occupying forces are also working in Tunisia to destroy the Jewish population

The story switches back to the Tunis of the 1940s. Tunisia has been under French occupation as a protectorate since 1881. At this point in time, the population of the capital, Tunis, is extraordinarily diverse and colourful. Alongside the Muslim majority with its Berber and Arab roots, the country is also home to more than 100,000 Jews, some of whom are descended from Jews who came to North Africa in ancient times. Then there are several hundred thousand Christians, most of whom arrived from Italy, France and other nations in the nineteenth century. The peaceful coexistence seems almost Utopian. But the threat posed by nationalism and racism is already hanging in the air.

When Nazi Germany begins its military occupation of large parts of France in 1940 and the German-controlled, anti-Semitic Vichy regime comes to power in Paris, the reverberations can also be felt in the French protectorate of Tunisia. Tunisia's Jews are no longer allowed to hold public office; Jewish doctors are only allowed to treat Jewish patients; thousands of Jews in Tunisia are stripped of French citizenship, bestowed after the adoption of the Crémieux Decree in the late nineteenth century.

The situation escalates when in November 1942, the Axis Powers Italy and Germany invade Tunisia. The German army sets up its headquarters in the aforementioned Hotel Majestic in downtown Tunis.

Today, this pretty Art Nouveau building is resplendent following a recent makeover. The hotel manager, Karim Bey, met the German author when he was here conducting research for his novel. "Daniel Speck wanted to know as much as possible about the history of the hotel. I wasn't even born at the time," says Karim Bey. "But my father managed this hotel and I lived here in staff quarters as a child. My father told me a great deal."

By occupying Tunisia in late 1942, Nazi Germany hoped to change the course of the war in its favour. As it turned out, it was a hopeless endeavour that cost the lives of countless soldiers ("Tunisgrad") and for which the Tunisian civilian population played a high price. Thousands were killed or injured in the fighting between the Allies and the Wehrmacht, and countless innocent families lost their homes and livelihoods in the hail of bombs.

Set against this dramatic historic backdrop, Daniel Speck relates the extraordinary love story of the German Wehrmacht soldier Moritz Reincke and the chamber maid Yasmina. The story is complex, because Yasmina is Jewish and already madly in love with another man: the hotel pianist Victor, also a Jew. Both Yasmina and Victor are in great danger, because in Tunisia too, the German occupiers are working towards the eventual expropriation and physical extermination of the Jewish population.

Under the supreme command of Walter Nehring (a post taken over by Hans-Jürgen von Arnim in 1942), the notoriously brutal SS commander Walter Rauff set up concentration camps and ordered the establishment of a so-called "Council of Jews", made up of selected members of the Jewish community. Council members were expected to help collect gold and money from Jewish families in Tunis and help recruit some 5,000 Jewish men for forced labour on the front.

"Righteous Among the Nations"

The Nazis were only able to partially realise their terrible goals in Tunisia – among other things because of time constraints and because many Italians and Tunisians showed courage and came to the aid of the Jews. A Muslim Tunisian, Khaled Abdelwahab, saved a total of 25 Jewish Tunisians from the Nazis in Mahdia in 1942/1943. Decades later, he was twice nominated for the status of "Righteous Among the Nations" in Israel, albeit without success.

The exact number of victims of the German occupation in Tunis is not known. It is thought that from November 1942 to May 1943, a total of some 2,500 Jewish young people and adults were forced to work in Tunisian labour camps in inhumane conditions. Several hundred perished; an unknown number were deported to extermination camps in Europe. 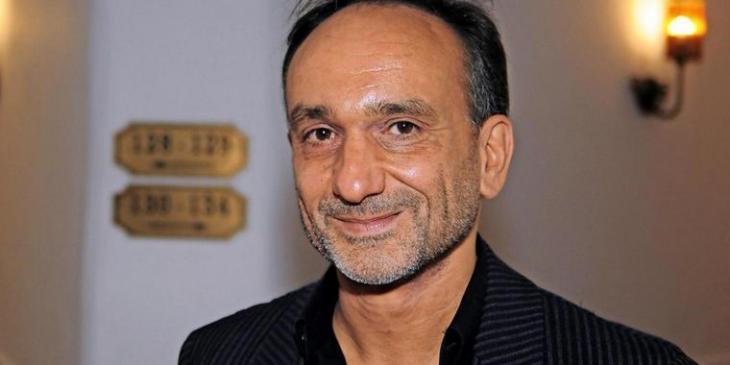 Daniel Speck, born in Munich in 1969, uses his stories to build bridges between cultures. On his travels he meets people whose fates inspire him to write his novels. He also writes film scripts, most notably "Maria, ihm schmeckt's nicht" and "Zimtstern und Halbmond". He was awarded the Grimme Prize and the Bavarian Television Prize for "Meine verruckte turkische Hochzeit"

In Daniel Speck's novel, the Jewish pianist Victor only just escapes murder at the hands of the Nazi occupiers. He is saved by, of all people, Moritz Reincke. Yasmina and her parents are also saved, but they lose their home in La Goulette. The traditional Jewish quarter in the Old Town of Tunis, the "Hara", is not an alternative, because Jews are now facing persecution throughout Tunisia. Yasmina and her parents survive after being hidden by Muslims in the Tunis Medina.

Today, Tunisia is still home to around 1,500 Jews, 1,000 of them on the island of Djerba alone. Most of the properties on the site of the former Jewish quarter in the Old Town of Tunis are now modern apartment buildings from the 1970s.

Many of the old synagogues of yore were either destroyed or converted into cafes. So, is the Jewish heritage in Tunis' Old Town fading into obscurity? "No," says Layla Bengassem, an engineer by profession and owner of a guesthouse in the Old Town. She offers tours during which visitors can learn about the area's Jewish heritage.

"In the old days, around one fifth of all Medina residents were Jewish," she says. "Now hardly any Jews live here. That's why it's important to know what was here and the details of the history of the place." Bengassem says she is very interested in the novel by Daniel Speck.

"Whenever we talk about the occupation in Tunisia, then it's usually about France. The German occupation was very short in comparison. We don't know much about it. But since I heard about the novel, I have started to remember much more of what my father told me about the war: that when he was a small boy growing up in his village near Tunis, he had to hide when the bombs fell, and that he was quite simply frightened," she continues.

Layla Bengassem hopes that Daniel Speck's novel will soon be translated into Arabic, French or English, so that she can read it herself. "I'm curious about the story of the two women Nina and Joelle. But perhaps the novel is more than that: a reason for Tunisians and Germans to engage more intensively with the 1942-1943 occupation and its consequences," she says.

Home
Print
Newsletter
More on this topic
The Jewish community in Tunisia: "Everything is ok; we don't have any problems"Book review: Cecile Oumhaniʹs "Tunisian Yankee": Life is elsewhereMuslims who saved Jews during World War II: The forgotten Schindlers
Related Topics
Anti-Semitism, Book reviews, Colonialism, German-Arab Literature Exchange, History of the Near and Middle East, Jews in the Islamic world, Judaism | Jews, Literature
All Topics

The disappearance of Razan Zeitouneh and her colleagues has been one of the greatest mysteries of the Syrian war – until today. DW's investigative unit hunted clues across six ... END_OF_DOCUMENT_TOKEN_TO_BE_REPLACED

Who’s financing, planning and commissioning terror attacks in Europe? This investigative documentary follows a trail that leads to Pakistan’s intelligence service, the ISI, which ... END_OF_DOCUMENT_TOKEN_TO_BE_REPLACED

Using a graphic novel to address a contentious issue like the Algerian war of independence may seem an odd choice, but new release "Algeriennes", translated into English by Ivanka ... END_OF_DOCUMENT_TOKEN_TO_BE_REPLACED

Although a unity government was formed in Libya in March 2021, tensions and possible crises between the political actors are already emerging. What problems does the country face ... END_OF_DOCUMENT_TOKEN_TO_BE_REPLACED
Author:
Martina Sabra
Date:
Mail:
Send via mail

END_OF_DOCUMENT_TOKEN_TO_BE_REPLACED
Social media
and networks
Subscribe to our
newsletter