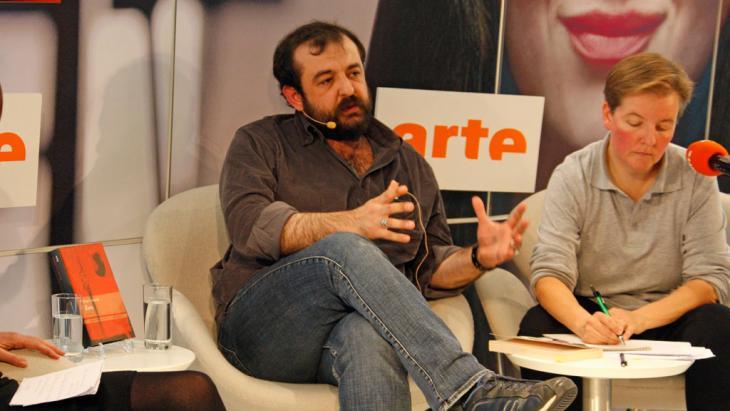 The Turkish writer Murat Uyurkulak's novel "Glut" (roughly translatable as "Embers") is a socially critical allegory of his homeland. Although not available in English, it has recently been published in German translation. Ceyda Nurtsch reports on a book that to the astonishment of its author has escaped the sharp eye of the censors in Turkey

In a Berlin café with walls covered in turquoise tiles sporting a profusion of filigree Ottoman arabesques sits a man who looks as though he comes from another world. His beard is scraggly, his hair tousled and he is wearing a leather bracelet: the Turkish cult author Murat Uyurkulak is presenting his novel "Embers", a tale that takes place between heaven and earth, between death and life.

In a land called "Ominosia" (Ominösien), somewhere in the East, civil war rages. This is the home of the protagonist, a young man named "Sample" (Muster), who lives with his family and is a notorious ne'er-do-well. When his paragon of a brother is killed in the battle against terrorism, "Sample" must take his place at the front.

But military service is not his thing and so he deserts, joined by his friend "13". The two fall into the hands of rebels. When "Sample" is released, he flees to the western part of the country and sets up a print shop in an abandoned cinema together with the failed filmmaker "Thirty-Five" and a few traumatised figures known as the "Oddballs" (Schrägen).

A panorama of the traumas of Turkish society 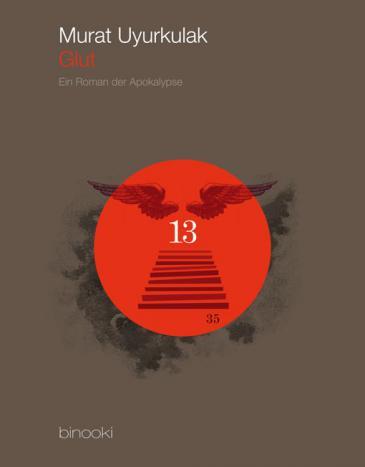 According to Ceyda Nurtsch, Murat Uyurkulak's latest novel is "a literary challenge, but one that is well worth taking on"

After printing some pirated editions, the self-proclaimed publishers bring out two important books. The first tells the life stories of the "Oddballs" from the cinema. Providing a panorama of the traumas of Turkish society, the work shakes the whole country to its foundations: the government calls a state of emergency, police lay siege to the streets, and booksellers, libraries and homes are raided. Astonishingly, only the cinema is spared.

The second book, the so-called "Book of Truth", is meant to avert the Apocalypse that is fast approaching in the form of steadily rising temperatures. Whether it succeeds remains an open-ended question at the novel's end.

In parallel with this earthly plane, heavenly realms also come into play in the novel. Angels set off on a quest for a "chosen one", a prophet. Only he will be able to save "Ominosia" and the entire region from doom.

So when "Sample" was drafted into military service at the front in place of his exemplary brother, it was all part of the plan hatched by the celestial beings, who have their own worries and lose their grip on the situation more than once.

With its fantastical creatures and settings, Murat Uyurkulak's novel "Embers" at first reads like a fairy tale. Yet every metaphor, every allusion is well thought-out, and all fantasy names have equivalents in the real world. "Wall City" (Mauerstadt) stands for Diyarbakir in eastern Anatolia, its name an allusion to the city's ancient fortifications. "Ominosia" is Turkey, the "Khirbos" fighting there are Kurds, the "Topigians" Armenians and the "Zazikis" Greeks.

These cryptic names have nothing to do with a fear of censorship, says Uyurkulak, explaining: "Throughout Turkish history, various social groups have experienced reprisals. There was the population exchange between Turks and Greeks, the genocide perpetrated on the Armenians, and what was done to the Kurds".

As a Turkish Sunni, he sees it all with the eyes of an outsider, he says. "While writing, I realised that I was entering the private sphere of these groups. I think it was an attempt to ease the burden on my shoulders." In 2006, while Uyurkulak was working on his novel, many cases were being heard by the courts based on Article 301 of the Penal Code, which – imprecisely formulated and leaving much room for interpretation – made the denigration of Turkishness punishable by law.

At the time, the author's lawyer underlined 37 sentences in the novel that he warned were liable to cause trouble. But a lawsuit never materialised. "Oddly enough," says  Uyurkulak with a smile. "Public prosecutors evidently don't read my books."

"Embers" is Murat Uyurkulak's second novel, following his debut with "Wrath" (Zorn), which catapulted him into the league of cult Turkish authors and came out in German translation in 2008. In both novels, Uyurkulak set himself the task of coming to terms with Turkey's past in a fictionalised manner. 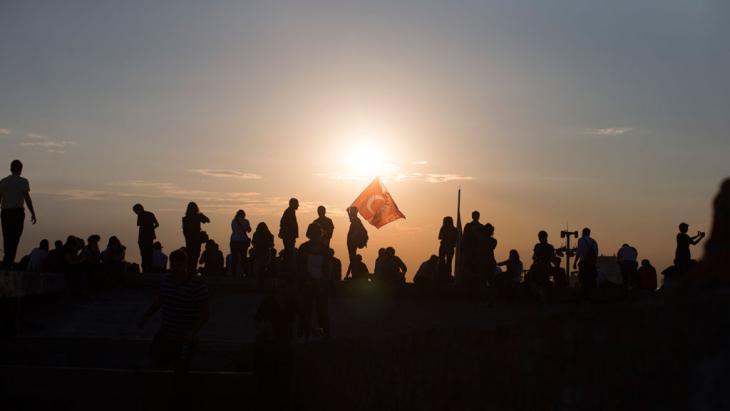 "Large-scale popular movements like the Gezi protests shake up not only the political power structure, but also the history we were taught at school. For some time now, there have been discussions in Turkey about the genocide against the Armenians and the assimilation policy towards the Kurds," says Murat Uyurkulak

In "Embers" he uses expressive language saturated with Ottoman terms and rife with allusions and metaphors – translated into German with great sensitivity by Sabine Adatepe – to get to the heart of the decades-long disputes between the Turkish military and the Kurdish PKK by means of a fantasy novel.

In his novel, Uyurkulak uses the "Oddballs" from the print shop as mouthpieces for the stories they recount in a book. In his opinion, it is only a matter of time, in particular after the Gezi protests, before official Turkish history is rewritten.

"Large-scale popular movements like the Gezi protests shake up not only the political power structure, but also the history we were taught at school. For some time now, there have been discussions in Turkey about the genocide against the Armenians and the assimilation policy towards the Kurds." Gezi, he says, has accelerated this process. "The people are starting to look at the official national ideology more critically", says Uyurkulak, "because people in the western part of Turkey have now felt the brunt of state power."

He remarks that many people apologised to their Kurdish fellow-citizens via Twitter; until then, they had no idea how harshly the government had dealt with them. "And that's the key. If a mutual sensitivity can evolve through such events, this gives me great grounds for optimisim," says Uyurkulak.

With its frequent changes of scene and perspective accompanied by myriad allusions and metaphors, "Embers" is a literary challenge, but one that is well worth taking on. Bit by bit, a novel of tremendous depth unfolds for readers, allowing them to relive like nowhere else all the trauma of the battles between the military and the PKK. And in the end, the reader gets the feeling that this novel – every single word – had to be written exactly the way it was.

Murat Uyurkulak was born in Aydin in 1972. He broke off his studies of law and art history in Izmir and lived for a time in Diyarbakir. Today he lives in Istanbul, where he works as a writer, publisher and translator.

Home
Print
Newsletter
More on this topic
Portrait of the Turkish writer Emrah Serbes: "Politics is made on the street by the people"A literary anthology of the Gezi protests: Gezi lives!Culture in Turkey before and after Gezi: The end of Cool Istanbul
Related Topics
Armenians, Gezi Park protests, Kurdish-Turkish Conflict, Literature, Minorities in the Muslim world, Turkish literature, Turkish opposition
All Topics

Some companies in Germany are reluctant to hire Muslims. But it is not only the Muslim applicants who are losing out, so too are the companies. After all, there are multiple ... END_OF_DOCUMENT_TOKEN_TO_BE_REPLACED

Artists and intellectuals in Turkey are coming under massive pressure. Since the attempted coup against Erdogan by parts of the military in 2016, the government has intensified ... END_OF_DOCUMENT_TOKEN_TO_BE_REPLACED

The disappearance of Razan Zeitouneh and her colleagues has been one of the greatest mysteries of the Syrian war – until today. DW's investigative unit hunted clues across six ... END_OF_DOCUMENT_TOKEN_TO_BE_REPLACED

How can the various realities of Kurdish life, shaped by depression, resistance and war, be depicted in art? This is the question addressed by the “bê welat – the unexpected ... END_OF_DOCUMENT_TOKEN_TO_BE_REPLACED

Almost all NATO troops have withdrawn from Afghanistan. Turkey is looking to fill the gap and is offering itself as a new protective power. But the Taliban are sending clear ... END_OF_DOCUMENT_TOKEN_TO_BE_REPLACED

Turkish refugees are for the most part invisible in Greece. In her film debut, the Greek journalist and filmmaker Marianna Kakaounaki portrays the fate of Turkish followers of the ... END_OF_DOCUMENT_TOKEN_TO_BE_REPLACED
Author:
Ceyda Nurtsch
Date:
Mail:
Send via mail

END_OF_DOCUMENT_TOKEN_TO_BE_REPLACED
Social media
and networks
Subscribe to our
newsletter