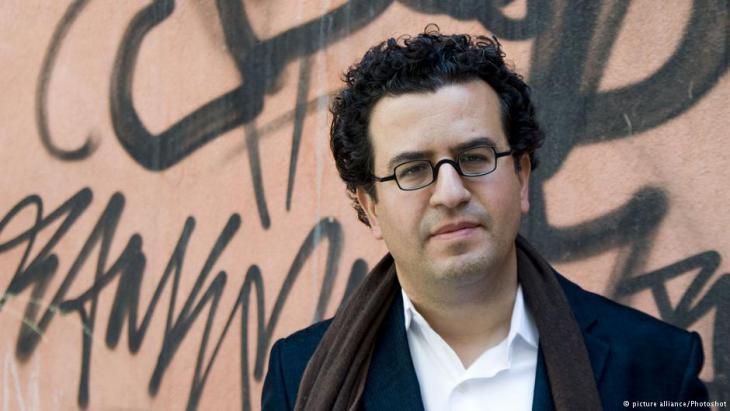 In his new memoir, "The Return", the writer Hisham Matar confronts the ghosts of his past: the disappearance of his father, the expropriation of his country's history and the shattered dream of a new Libya. Claudia Kramatschek read the book

"Early morning, March 2012. My mother, my wife Diana and I were sitting in a row of seats that were bolted to the tiled floor of a lounge in Cairo International Airport. Flight 835 for Benghazi, a voice announced, was due to depart on time."

This brief note is the opening to Hisham Matar's "The Return". It is most personal work so far by the writer who was born in New York and grew up in Tripoli and it is also his best yet. Like all his novels, "The Return" revolves around the painful void that is at once the source of his literary inspiration and his spiritual burden. In 1979, at just eight years old, Matar fled Libya with his family. In 1990, his father, a diplomat opposed to the Gaddafi regime, was kidnapped from exile in Egypt and taken to the notorious Abu Salim prison in Tripoli, a place which, according to reports, the regime reserved for the disappearance of all those it wanted to erase from the collective memory.

For Hisham Matar – nineteen years old at the time – the quest to discover the truth about what had become of his father would develop into a lifelong obsession. Again and again – and this is also the theme of "The Return" – and all over the world, he has followed spurious trails that have inevitably led to the crushing of carefully nurtured hopes.

In search of his father

By 2012, the Arab Spring had well and truly reached Libya, Tripoli had fallen in August of 2011 and Gaddafi was already dead. For Hisham Matar, it meant the beginning of a journey he had been longing to make for 33 years and one he had always feared – his first return to Libya. The main objective of the journey was finally to establish whether or not his father was still alive – and, if not, when and under what circumstances he had died.

"The Return" is the journal of this trip and at the same time it is so much more. Elegant and beautifully written, it is a work that radiates out in various directions and to other times, all skilfully woven together by Matar. 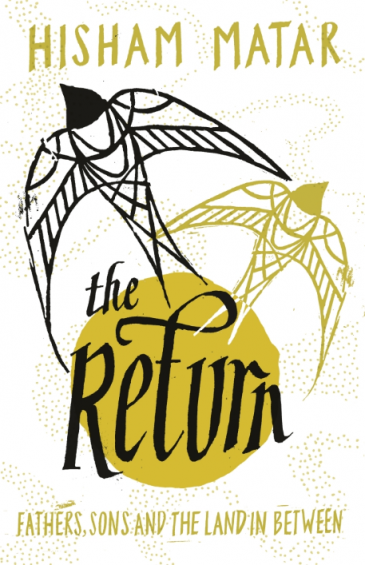 "′The Return′ – this much is already evident – is destined to become one of the classic memoirs, magnificent in its treatment of the themes of fathers and sons, homeland and exile, Libya and the shattered dreams of the Arab Spring. In short, it is a work that represents the victory of literature over pain and the strength inherent in those often deemed the defeated,“ writes Claudia Kramatschek

The story begins on the day Gaddafi seized power in 1969, an event that sealed the family's fate. It instantly transformed Matar's father into a dangerous opponent of a regime which initially, he, like many men of his generation, had welcomed as heralding the dawn of a new political era.

The way in which Matar shrewdly links his father's story with the political history of his homeland provides the reader with revealing insights; his description of the 1970s, for example, when piano lessons and visits to the swimming club were organised for Hisham and brother Ziad as a means of shielding them from the barbarous actions of the repressive regime.

The story of his grandfather introduces us to the period when Libya was under Italian occupation, a time when the country was being exploited both economically and emotionally. Anyone who takes the time to read these passages will see this country, which the West has too often and for too long regarded only as a failed state, with different eyes.

The Arab Spring did fail, however, in Libya as elsewhere. When Hisham Matar returned to Libya in 2012, the possibility of a better future had seemed within reach – and yet the civil war that would destroy the hope of an Arab Spring for Libya was already looming on the horizon. "I have never been anywhere," says Matar, "where hope and apprehension were at such a pitch. Anything seemed possible and nearly every individual I met spoke of his optimism and foreboding in the same breath."

The worst fears were soon realised, however, as armed militias began to seize control of all aspects of everyday life and that in a country, as Matar perceptively reminds us, where the light that was once welcomed into the houses was now shut out, like everything else that came from the outside.

And something else had changed: now there were special walls, public spaces where the so-called martyrs were commemorated. One of his own cousins would join the opposition to Gaddafi and be killed. Another joined the Syrian resistance against Assad. Yet another, formerly a rather apathetic attorney, was galvanised by events, transforming himself into a dedicated proponent of human rights in Libya.

There is evident affection in Matar's descriptions of his meetings with former friends of his father and most of all, those members of his own family, who, unlike himself, did not go into exile, but instead, like his father, to prison, sometimes for decades. Many years might pass locked away in the same wing.

In numerous introspective passages, Matar adroitly balances the intimacy of his own emotional responses with a reflexive distance; in the passages, for example, where he recalls the troubling nature of encounters with people desperate to tell him what life had been like during their long prison terms and how he had been equally determined that they should understand how often he had thought about them. They, keen to tell him how they had never wavered in their loyalty to his father; he wanting just as much to let them know that he had never forgotten them and done what he could. 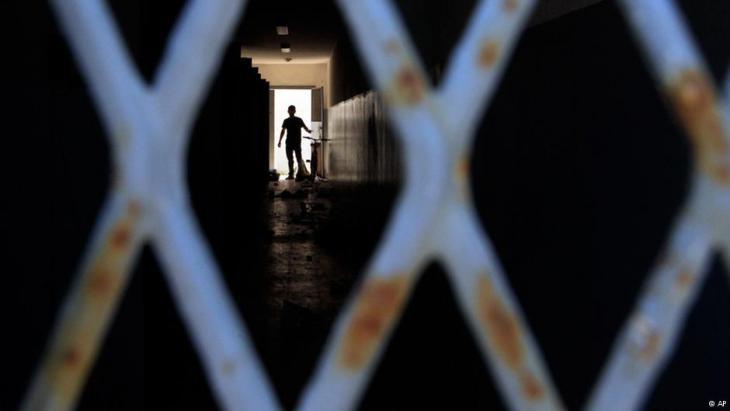 A truly awful place: in 2011 investigators working for the National Transitional Council of Libya discovered a mass grave containing 1,200 corpses dating from 1996 in Tripoli. The deceased, all prisoners from the notorious state security prison Abu Salim, were slaughtered by Gaddafi’s henchmen in June 1996. The Abu Salim massacre was savage payback for a prison revolt which had broken out over conditions within the facility. The bloodbath was carried out at the behest of the then head of the secret service Abdullah Senussi

Among those he meets is his Uncle Mahmoud, his father's youngest brother. It is from him that Matar learns that his father had most likely been killed during the 1996 massacre of prisoners at Abu Salim prison, an atrocity cruelly and cynically covered up by the regime until as recently as 2011. And yet, according to Matar, it was this that had initiated the revival of a gradual opposition to Gaddafi.

The victory of literature

In the book, at least, we come full circle. While some doors open, others remain closed. Matar learns, for example, for the first time that his father had also once had literary ambitions.

But when his uncle tells him about what happened during the massacre, it is the words of the Greek Telemachus, son of Odysseus, he finds himself thinking of. They are words, he says, about the son's desire to know that his father would spend the rest of his life in the safety and dignity of his own house, but also about the son's wish to be able to leave his father at home, to finally turn away, to look forward and be able to go out into the world himself. As long as Odysseus is missing, Telemachus cannot leave home. And as long as Odysseus is not at home, he is both everywhere and nowhere.

The writer Hisham Matar has the capacity to grapple with this idea of the son's pain, without shirking from it or compromising. It is this capacity that defines the quality of this evocative and moving book. "The Return" – this much is already evident – is destined to become one of the classic memoirs, magnificent in its treatment of the themes of fathers and sons, homeland and exile, Libya and the shattered dreams of the Arab Spring. In short, it is a work that represents the victory of literature over pain and the strength inherent in those often deemed the defeated.

German Middle East analyst Guido Steinberg and television journalist Ulrich Tilgner have both published new books on the conflicts in the Middle East. Their analyses and their ... END_OF_DOCUMENT_TOKEN_TO_BE_REPLACED

The foreign policy direction favoured by Washington's new incumbent is putting a strain on relations with Turkey. The two nations look set to clash over a whole host of issues, ... END_OF_DOCUMENT_TOKEN_TO_BE_REPLACED

Turkey is largely isolated in the Middle East. Partners are few and far between. Its closest ally, Qatar, has just made peace with its neighbours. Together with the change of ... END_OF_DOCUMENT_TOKEN_TO_BE_REPLACED

Mass protests began in Egypt on 25 January 2011. They triggered the overthrow of long-time ruler Mubarak. Ten years later, many human rights activists and journalists are in ... END_OF_DOCUMENT_TOKEN_TO_BE_REPLACED

Mass protests began in Egypt on 25 January 2011. They triggered the overthrow of long-time ruler Mubarak. Ten years later, many human rights activists and journalists are in ... END_OF_DOCUMENT_TOKEN_TO_BE_REPLACED

Libya is disintegrating into chaos and lawlessness. Women who stand up to those in charge of the country end up fearing for their lives, even though it is these very women who ... END_OF_DOCUMENT_TOKEN_TO_BE_REPLACED
Author:
Claudia Kramatschek
Date:
Mail:
Send via mail

END_OF_DOCUMENT_TOKEN_TO_BE_REPLACED
Social media
and networks
Subscribe to our
newsletter