Intricate patterns of the mind

Imagine a book of more than 500 pages where plot and character donʹt matter, a giant multi-room museum piece that asks to be read in stages and puzzled over. Ibrahim al-Koniʹs epic novel "Al-Majus" – newly available in English translation as "The Fetishists" – is just such a read. By Marcia Lynx Qualey

The nineteenth and twentieth centuries saw an explosion in novel-writing. As this larger-than-life literary genre moved into new territories and languages, it often displaced other imaginative prose, taking up the largest share of literary attention.

By the time the great Libyan writer Ibrahim al-Koni learned Arabic, in 1960, the novel was firmly entrenched. But al-Koni, who grew up among the nomadic Tuareg people, didnʹt want to bend the stories of his childhood to fit the form. Instead, he wanted to bend the novel to fit his vision. After several attempts, he invented a new, hybrid form that was fully born with his epic al-Majus, now translated as The Fetishists by William Hutchins, published by University of Texas Press.

In Arabicʹs pre-novel prose, most "characters" were neither real-feeling nor particularly unique. They might illustrate a moral conundrum or a philosophical question, or they might embroider an exciting plot. But we donʹt know whether Scheherazade and Shahryar had gout, snapped at their servants, or struggled in their relationships with their mothers. The same can be said for the characters in Ibn Tufaylʹs Sufi-philosophical work, Hayy ibn Yaqzan.

Al-Koniʹs novel borrows some features from Ibn Tufaylʹs pioneering twelfth-century text, others from Tuareg folklore, and still others from Herman Melvilleʹs Moby Dick. Al-Koni had a similarly hybrid upbringing. He was born in 1948, among the Tamasheq-speaking peoples in the western Libyan desert, just after the French took over that region. Al-Koni didnʹt learn Arabic until he was 12, but he soon fell in with the language. 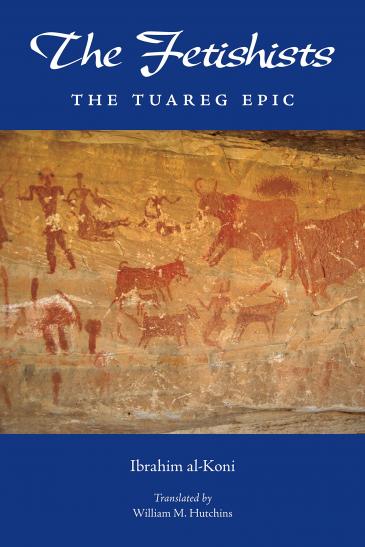 Shades of Ibn Khaldun: "The Fetishists" is packed with Sufi-Hegelian dialectics of free and enslaved, nomad and settled, monotheist and animist. Happenings are often magical, yet this is less a magical realism than a mystical, Sufi one

In the 1970s, he moved to Soviet Russia to study comparative literature and thatʹs where he grappled with theories of the novel, particularly those of Marxist literary critic Gyorgy Lukacs. Al-Koni worked in Russia and Poland, lived two very productive decades in Switzerland and finally moved to Spain, where he lives today.

But wherever al-Koni has been, physically, his novels have taken readers to Libyaʹs Red Hamada desert. This is primarily a "desert of the mind"– or at least thatʹs what al-Koni says in interviews – yet the intensely realised details set readers in the face of a hot qibli wind, which feeds us "three handfuls of sand a day".

This wind might blow sand into "unblemished folds" outside a tent as it "spread out new tongues of sand and eliminated old ones[.]" Al-Koni is also a master of describing the gait of a human body when buffeted by harsh desert winds.

Yet al-Koni is not interested solely in the desertʹs people. In The Fetishists, as in all his work, the desertʹs animals and plants are deeply sentient beings.

The book approaches the desires of plants as sympathetically as those of humans, as when the acacia trees wait "patiently and dejectedly" until, "a breeze blew from the north, and they captured it with their crests, sucking up moisture and deriving life from it."

This is not mere anthropomorphism. Instead, the human is de-centred to be a part of the desert landscape, not its focus.

Gifts from the desert

Al-Koni tells us, in the bookʹs afterword, that he returned to visit the desert in 1987, when he was just shy of 40. The first gift it gave him was his glittering short novel Bleeding of the Stone. The second visit yielded Gold Dust. On his third trip, he was rewarded with an "even greater find": his epic The Fetishists, which is celebrated as one of the twentieth centuryʹs great Arabic novels.

This book doesnʹt build close relationships between any particular characters. In the afterword, al-Koni says he wanted the novel to exist "outside of relationships". The book prepares us for this from the first scene, which opens on a mountaintop, narrated by an unnamed character whoʹs been "liberated" from his body to observe the "comic and awkward" lives of the people below. Alongside our narrator, we observe tiny humans who make up a small part of a vast desert landscape.

There is an Ibn Khaldunian (1332-1406) aspect to this. Like the great Maghrebi philosopherʹs al-Muqaddimah, al-Koniʹs novel follows the struggles of human generations, particularly between nomadic and settled peoples. The book is packed with Sufi-Hegelian dialectics of free and enslaved, nomad and settled, monotheist and animist. Happenings are often magical, yet this is less a magical realism than a mystical, Sufi one.

Itʹs odd to find a book of more than 500 pages where plot and character donʹt matter. Yet The Fetishists is just such a book. There are a handful of main characters: Musa (who is also referred to as "the Dervish"), Udad (who roams the desert peaks and whose name means Barbary sheep), Adda (usually just called the Leader), Tenere (often referred to as "the princess"), Anay (Tenereʹs uncle, and the Sultan of Waw), and Okha, a nobleman who is Udadʹs rival for Tenereʹs affections. But you could just as easily say there are no "main characters", and that everyone –including the acacia trees, the djinn, and the desert lizards – is equally important.

Al-Koni suggests, in the afterword, that the inspiration for the novel was a bet between his brother and another young man, who scaled a cliff face in a wager over camels. In The Fetishists, Udad is challenged by Okha to climb a similar cliff. Udadʹs winnings, should he make it, is Tenereʹs heart. But this wager is not at the centre of the novel. The book is designed less like a triangle – with action that rises to a central climax – than a giant, patterned carpet.

That does not mean the novel is timeless. We are given a year marker near the end, when we hear that, "For more than a century, Wawʹs ruins towered over the plain. ... Then the famous floods of 1913 washed away all the structures, leaving not even one stone resting atop another." It was 1913 when the Italian army violently flooded in and seized Ghadames, the oasis town nearest to where al-Koni was born.

The characters in The Fetishists – who lived more than a century before the arrival of the Italians – do express interest in the world beyond their desert. We hear nothing of the Ottoman rulers, although we do hear about the Almoravid dynasty-that-was. There are passing mentions of cities to the north and we even hear about the Christians, although only when a traderʹs family is kidnapped and sold off into slavery.

It is not a book for every reader. At times the translation is somewhat disjointed, slipping into English colloquialisms that tend to break the flow. Yet if al-Koniʹs shorter Bleeding of the Stone and Gold Dust are small paintings you can hang on a living-room wall, then The Fetishists is a giant multi-room museum piece. It asks to be read in stages, and puzzled over, as the hot qibli wind blows another handful of sand into your mouth.

Two refugees detained in Egypt are facing deportation to Eritrea. The expulsion of the Eritreans, who have been incarcerated in Cairo for more than eight years, has been halted ... END_OF_DOCUMENT_TOKEN_TO_BE_REPLACED

Germany's foreign policy is explicitly values-based. But what happens, Ralf Bosen asks, when democracy, the rule of law and human rights collide with the logic of trade and ... END_OF_DOCUMENT_TOKEN_TO_BE_REPLACED

A new survey by Arab Barometer adds numbers to the narrative that COVID has led to a harsher reality for women in the Middle East and North Africa. By Jennifer Holleis and Razan ... END_OF_DOCUMENT_TOKEN_TO_BE_REPLACED

Morocco and the European Union are at cross purposes when it comes to the Western Sahara. And, as Germany does not support Moroccan claims to the territory, a major conflict has ... END_OF_DOCUMENT_TOKEN_TO_BE_REPLACED

Turkey's parliamentary and presidential elections are scheduled for June 2023. But they are already casting a shadow. While the opposition is calling for early elections, ... END_OF_DOCUMENT_TOKEN_TO_BE_REPLACED
Author:
Marcia Lynx Qualey
Date:
Mail:
Send via mail

END_OF_DOCUMENT_TOKEN_TO_BE_REPLACED
Social media
and networks
Subscribe to our
newsletter