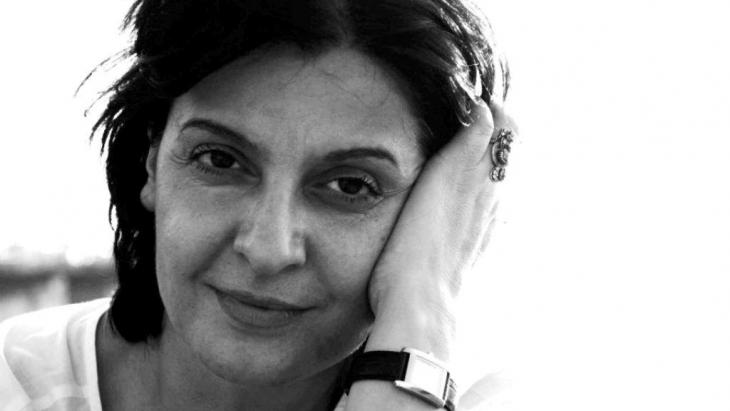 In ″The Weight of Paradise″, the Lebanese writer Iman Humaydan, born in 1956, gives us a layered depiction of the individual and collective traces left on her country by the civil war. By Claudia Kramatschek

On 12 November 2015, an insidious double bomb attack in the centre of Beirut killed at least forty people. One day later, more than 130 people died in Paris at the hands of brutal killers. Islamic State claimed responsibility for both acts of terror. Born in Lebanon in 1956, the author Iman Humaidan was herself in Paris at the time – now her second home, the city to which she had once fled to seek shelter from the violent excesses of the Lebanese civil war.

That extreme violence that accompanied the Lebanese civil war, leaving a lasting mark on subsequent generations, is at the centre of the writer′s literary work. All her novels tell of the trauma of that war, a conflict that divided an entire nation even down to individual families. All her novels are devoted to processing that trauma – to this day, Lebanese society is reluctant to break the widespread silence on the matter.

The young Syrian journalist Nura – one of three protagonists in Humaidan′s novel – finds out at first hand how dangerous it can be to break that silence. In 1978, when the novel begins, she is murdered in Beirut by the Syrian secret service, on the orders of the officer who got her sister pregnant and then drove her to suicide. This suicide is the main reason why Nura fled to Lebanon in the first place, having decided to write publicly about her sister′s fate – one shared by many women – against the will of the man and her own family. ″The Weight of Paradise″ is an urgent read for our times: using the tiniest of miniatures, Lebanese author Iman Humaidan shows a rare thing – the female face of war, flight and emigration

It is Nura′s determination to tell the truth that leads to catastrophe. In Beirut, she leaves behind a young child – and a suitcase full of letters and personal documents.

The child remains in the care of her friend Sabah, a Kurdish woman who once came to Lebanon as an emigrant herself. The suitcase, meanwhile, ends up 16 years later in the hands of the Lebanese journalist Maja, recently returned to Beirut after several years in Paris.

Beirut: a city that wants to forget

By this point Beirut appears to have reawakened, with entire neighbourhoods being renovated and rebuilt. Maja – quite possibly an alter ego of the writer – is sceptical, however. She senses that the bustling glamour of the new is a hectic attempt to paper over the old, unhealed cracks.

Researching for a film to document the lives of the city′s former residents, she comes across Nura′s dusty suitcase in one of the ruins left over from the war. She is fascinated – and sets out to follow its traces.

That search becomes a journey through time and space, during which the writer Iman Humaidan uses the three fates of Maja, Nura and Sabah to subtly map the mental and social injuries of not only a nation but an entire region.

The blood tax of national identity

Nura′s diary, for instance, takes us back to the time when the civil war broke out in Beirut, the beginnings of the sectarian violence that was to spread like wildfire, with consequences beyond the country′s borders.

Then there are letters received by Nura between 1975 and 1978 from the Turkish-Kurdish journalist Kemal in Istanbul, who becomes her lover and is the father of her child. These telling missives reflect the price that every nation pays when it builds its identity on the blood of the oppressed and disenfranchised.

Violence is always countered by silence. Sabah, Nura′s friend, has spent years trying to forget what happened in the turmoil of the war – and what she did in order to survive. Maja′s visit confronts her with the past – and her own guilt.

Yet at no point in her novel is Iman Humaydan concerned with apportioning blame. Instead, she retraces buried connections, hidden links between people and nations. Humaidan not only sets her plot between Syria, Lebanon and Turkey, but also introduces characters that contradict the idea of monolithic identities. The Jewish Beiruti Ismael, for instance, hides Nura′s suitcase – until he is chased out of the city. Then there is Nasar, a shoemaker with Armenian roots forced to deny his origins.

What more or less all the characters have in common is that they are emigrants: people forced to flee, who have lost everything. What they may well find, however, is like-minded people – and the experience that there are things that forge links across the boundaries of nationality and origin.

The female face of war and emigration

Iman Humaydan stresses these connecting factors rather than the divisions in life. Under the circumstances, the reader is all too willing to forgive the novel′s ending, which comes dangerously close to emotional kitsch. For ″The Weight of Paradise″ is particularly impressive in one respect. Using sometimes the tiniest of miniatures, Iman Humaydan shows the female face of war, flight and emigration. That′s something we see far too rarely, even today. That makes ″The Weight of Paradise″ an urgent read for our times.

German Middle East analyst Guido Steinberg and television journalist Ulrich Tilgner have both published new books on the conflicts in the Middle East. Their analyses and their ... END_OF_DOCUMENT_TOKEN_TO_BE_REPLACED

On 7 March, Switzerland became the latest European country to vote in favour of a so-called "burka" ban. It was yet another feather in the cap of the right-wing populist Swiss ... END_OF_DOCUMENT_TOKEN_TO_BE_REPLACED

In Grenoble, France, two professors have been pilloried in a dispute over the use – or otherwise – of the term Islamophobia. Is freedom of speech in jeopardy? By Stefan Dege and ... END_OF_DOCUMENT_TOKEN_TO_BE_REPLACED

In his controversial book published in 2020, French author Pascal Bruckner describes anti-Muslim sentiment as a fiction, claiming that the term "Islamophobia" is being used to ... END_OF_DOCUMENT_TOKEN_TO_BE_REPLACED

Several media reports in recent weeks have focused on the potential threat presented by Islamist groups in Germany. The discourse is fraught with generalisations, both sides ... END_OF_DOCUMENT_TOKEN_TO_BE_REPLACED

END_OF_DOCUMENT_TOKEN_TO_BE_REPLACED
Social media
and networks
Subscribe to our
newsletter