Readers who engage with the poets’ imaginative worlds and stylistic quirks, which also transport the German language, will not be troubled by the fact that the language of the translation sometimes appears less poetic, and occasionally even pedestrian. In many poems, however, Scharf has managed to retain the rhymes and thereby convey something of the linguistic beauty of the Persian original. In this melancholic roba'i, or four-liner, for instance – a form characteristic of the work of the poet Mehdi Akhawan Sales: Es kam der Tod und fragte nach der lieben Seele mein. / Er forderte, was sie gewann und was ihr fehlte, ein. / Ich lebte einst den Freuden und gab alles für sie hin; / Und er zog nur den Leib, nur eine leere Hülle ein. (Death came and asked for my dear soul. / He claimed what it had gained and what it lacked. / I once lived for joy and gave everything for it; / And all he seized was the body, the empty husk.)

The voice of the translator comes through

The observant reader will doubtless notice how diligently Scharf has searched for the most fitting expressions in the translation – an endless balancing act, in which ultimately the voice of the translator can also be heard. At the same time, though, the reader is carried along by the translator’s enthusiasm for the legacy of Persian poetry. "Goethe himself, who declared 200 years ago that the hour of world literature had come, gave a place of honour to Persian lyric poetry within that literature," says Kurt Scharf. 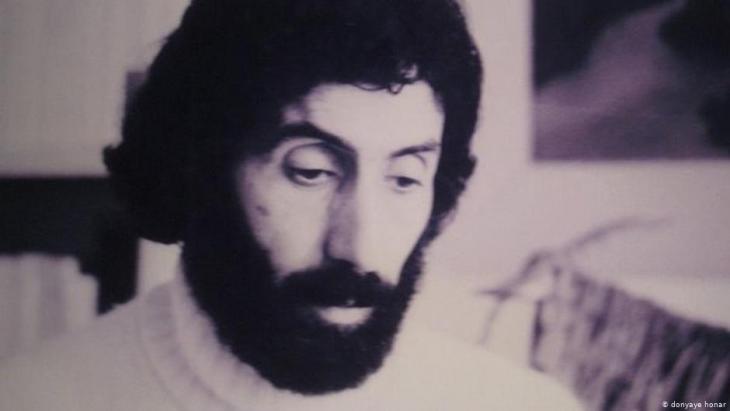 Scharf takes pains to stay as close as possible to the original in his translations. And in doing so, he pushes the linguistic freedoms that poetry affords to the limits. The style of each poet is still recognisable in the verses – from the simple, meditative language of Sohrab Sepehri to the bold intensity, scandalous at the time, of the poet and pioneer of emancipation Forough Farrokhzad

Scharf has been working for the Goethe Institut since 1969, in locations in Latin America, Europe and western Asia. He was the deputy director of the Institut in Tehran from 1973 to 1979, before moving to the Brazilian branch until the mid-1980s. He then spent a few years in Berlin, where he headed the "Literature, Society and Science" section at the Haus der Kulturen der Welt. From 1994 to 1999, Scharf was the director of the Goethe Institut in Istanbul, followed by the Lisbon branch until 2005.

In his afterword to the poetry anthology, Scharf gives the reader a revealing impression of the historical climate he experienced in Tehran towards the end of the 1970s. At that time, Scharf got to know some of the Iranian poets in his book personally.

On "Ten Evenings" in October 1977, the writers’ association that had been banned under the last Shah and the Tehran Goethe Institut together put on the largest literary event in Iranian history. For the 66 poets and authors who took part, these evenings became a forum for demonstrating against the restrictions to freedom under the Pahlavi regime.

"In the time before the last Shah fled, the poets were the Maitres-Penseurs of Iran, setting the country’s intellectual climate; and the Iranians’ artistic will was concentrated on poetry in a way we can scarcely imagine. That was a formative experience for me," Scharf says, looking back. With this anthology, he now gives us an impression of the extraordinary role that Persian poetry has played as a melting pot of various schools of thought, and also of the unusual relationship that Iranians still have to their poetry.

Home
Print
Newsletter
More on this topic
Goethe and the Orient: Why did the poet's mind wander to far-off climes?Interview with the Iranian writer Abbas Maroufi: ″Self-censorship is the worst″The "Green Memories" project of Forough Farrokhzad: Desperation and hope set to music
Related Topics
Book reviews, Dialogue of Cultures | Intercultural Dialogue, History of the Near and Middle East, Iranian literature, Languages, Translation
All Topics

Iranian author Fariba Vafi is adept at describing everyday scenes and concealing within them something ambiguous, in parts strange and grotesque. She writes novels – which have ... END_OF_DOCUMENT_TOKEN_TO_BE_REPLACED

Her grandparents are Jews – born in Tunisia and Algeria. Director Cleo Cohen has now broken the silence about this with a very personal debut. By Nadine Wojcik END_OF_DOCUMENT_TOKEN_TO_BE_REPLACED

Life imprisonment for crimes against humanity: that was the sentence handed down to Anwar Raslan in the world's first trial of a member of the Syrian torture system. Matthias von ... END_OF_DOCUMENT_TOKEN_TO_BE_REPLACED

Every year in December, the team at Qantara.de takes a look back at the articles that proved most popular with our readers. This year is no different. Here is a run-down of the ... END_OF_DOCUMENT_TOKEN_TO_BE_REPLACED

With his new album, "A Voice Keeps Calling Me", the Persian santur player Kioomars Musayyebi is building bridges from Iran across the Arab world to European early music. By Stefan ... END_OF_DOCUMENT_TOKEN_TO_BE_REPLACED

Former lawyer Said Haider has invented a chatbot for those seeking advice on anti-discrimination issues – Meta is the first chatbot of its kind in the world. In conversation with ... END_OF_DOCUMENT_TOKEN_TO_BE_REPLACED
Author:
Marian Brehmer
Date:
Mail:
Send via mail

END_OF_DOCUMENT_TOKEN_TO_BE_REPLACED
Social media
and networks
Subscribe to our
newsletter