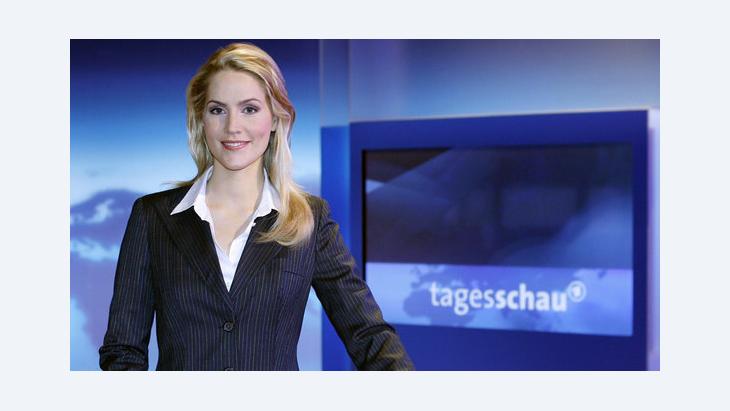 ﻿The work of artist Monika Huber is a critical appraisal of how the media reported on the Arab Spring. Some of her pieces now appear in a book published in cooperation with the Middle East reporter Susanne Fischer. A review by Björn Zimprich

﻿One minute and 30 seconds. In modern television news formats such as "Tagesschau" or "heute", this is the length of time allotted to a report including film. One minute and 30 seconds to explain global events to television viewers in central Europe. "One-Thirty" is the title of a work by the artist Monika Huber that provides the basis for a new book, News - The Televised Revolution.

One-Thirty – the title itself is infused with doubt: can this be long enough for an adequate elucidation of world affairs? It isn't, of course, and this is also the theme of the book. Anyone engaging with the art book News - The Televised Revolution certainly has to set aside more than one minute and 30 seconds to do so.

But the book does not confront the reader with trite criticism of the media. It is instead more of a coherent collage of 53 images by the artist Monika Huber and a selection of texts by the Middle East reporter Susanne Fischer, in addition to further contributions by bloggers and activists from various Arab nations.

​​After all, viewers and those working in the media are increasingly less inclined to believe the pictures coming out of crisis-torn regions, now that every last viewer is aware of the fact that images are used as a political tool. Fischer says that this has an especially negative impact on what are known as "citizen journalists" from Syria. Although they may risk life and limb to upload a flood of images and videos of demonstrations onto the web and out into the world, these contributions are not regarded as verifiable pieces of information. Media agencies place far more faith in the accounts filed by Western journalists, although these reporters also – whether in Libya or Syria – allow themselves to be transported to the front by rebel fighters, thereby adopting their perspective.

These journalists, embedded within rebel armies, strongly resemble those so heavily criticised during the Iraq war. But Fischer ascertains that "Unlike the Iraq war, where advocates and opponents of the US invasion provide different interpretations of events, at least in the case of the Arab revolutions, Western journalists are almost all united on the side of the demonstrators." In this respect, dispensing with the "fable of the objective journalist" would appear to be long overdue.

News - The Televised Revolution is therefore also a plea to place less trust in television pictures and to perhaps lend an ear now and again to the bloggers and reporters writing directly from affected regions. The book provides a good introduction to this.

The Kurds are under attack from two sides: from Turkey, and from Iran. The situation in their territories in northern Iraq is becoming increasingly desperate. Birgit Svensson ... END_OF_DOCUMENT_TOKEN_TO_BE_REPLACED

More than 300 children in rebel-held northwest Syria kicked off their own football World Cup on Saturday, with organisers hoping to shine a light on communities battered by 11 ... END_OF_DOCUMENT_TOKEN_TO_BE_REPLACED

Lamya Kaddor, MP for Germany’s Green Party, visited Qatar with a group of parliamentarians. In interview with Claudia Mende, she advocates a differentiated picture and urges that ... END_OF_DOCUMENT_TOKEN_TO_BE_REPLACED

Arabs in the German capital? For many, this means criminal clans. Yet the city is home to a vibrant intellectual scene. Exiles from Syria, Palestine and Egypt are gathering to ... END_OF_DOCUMENT_TOKEN_TO_BE_REPLACED

After a two-year hiatus, the Arab League re-convened at the beginning of November in Algiers against a backdrop of uncertainty and discord. By Pierre Boussel END_OF_DOCUMENT_TOKEN_TO_BE_REPLACED

In the run-up to the COP27 global climate summit, hosted by Egypt in November, it is worth noting that little rainfall, aggressive heatwaves and worsening drought make the Middle ... END_OF_DOCUMENT_TOKEN_TO_BE_REPLACED
Author:
Björn Zimprich
Date:
Mail:
Send via mail

END_OF_DOCUMENT_TOKEN_TO_BE_REPLACED
Social media
and networks
Subscribe to our
newsletter