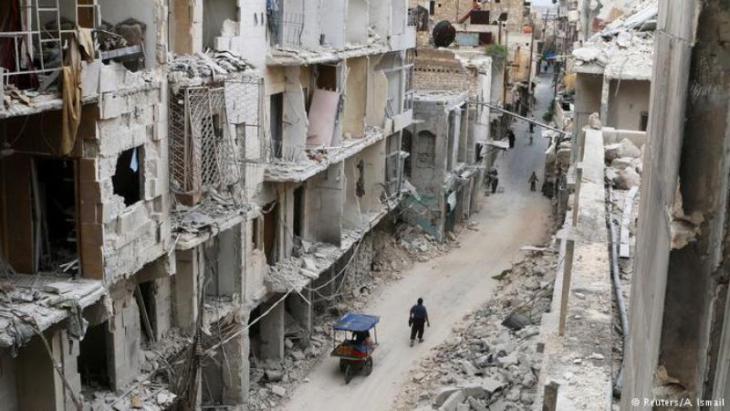 Surviving in the death zone

The writer Niroz Malek lives in his hometown of Aleppo to this day. What does it mean to preserve a vestige of dignity in the midst of death and destruction? The fifty seven miniatures in his collection provide the answer. Volker Kaminski read the book

Every time the narrator leaves the house he fears being hit by stray bullets from a nearby checkpoint. Night or day, he is constantly focused on signalling his approach to the omnipresent soldiers and masked militiamen, so as not to alarm them.

Many of his friends have been killed by ricocheting shots, others died in an unexpected hail of bullets or bombs. Even home is no longer a refuge – a nearby detonation can transform flying glass shards into deadly missiles at any time.

Where even the dead find no peace

The narrator′s thoughts, dreams and experiences revolve perpetually around death, which hovers above the country with genuine and metaphorical omnipotence. Not only is life constantly threatening to tip over into death; even the dead find no peace. In a number of his pieces, they return to our world and wander the streets, full of fear. They leave their graves, or – like one young man in July – the mortuary, because he can no longer stand the cold in the "hospital fridge".

The narrator does, however, manage to escape regularly, if briefly, from this cabinet of horrors. He turns his mind to the treasures of his library, conversing with Thomas Mann, Hermann Hesse and Jose Saramago. Or he mounts his horse as Don Quixote in his imagination, conquering hundreds of soldiers at the checkpoint with his sword, in brave imitation of his chivalric hero.

And yet the narrator knows, of course, that he has no power to change the situation. At times he feels like a "zero" in the war, just as helpless as the other locals, whose haggard faces on the street present a picture of "absence and panic". 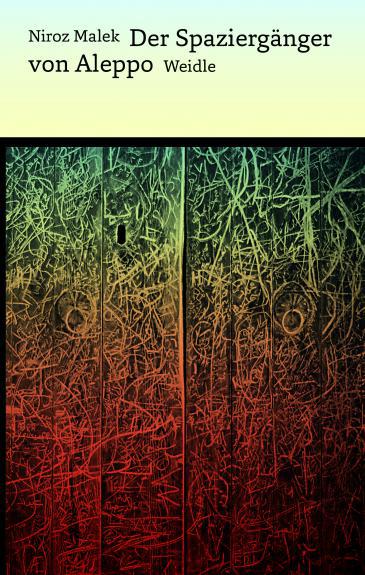 Syrian author Niroz Malek combines realistic descriptions with surreal scenes to convey the horrors of the ongoing war in his home country. At the same time, his texts address the healing power of literature and art

Yet because he is not prepared to leave Aleppo and Syria – as he explains in the introductory piece, this would mean losing his "soul" – he learns to overcome his constant fear of injury and death and begins to walk the city′s dangerous streets, treks that fill him with an unbridled, fundamental drive for freedom and urge for life.

Malek, the author of several highly respected novels and short story collections, walks his narrator through a city traumatised by war, scouring for traces of a past life apparently buried forever beneath ruins and rubble. Often, the sight of the devastated streets, markets and shops drives his flaneur to desperation and he has to continue "with closed eyes".

This seemingly interminable and "senseless long war", referred to by Malek in his epilogue as the "Third World War", has brought so much suffering that even the children have stopped drawing flowers and trees and instead depict "destroyed houses, burned trees, corpses strewn on the ground".

Although the narrator doesn′t miss a beat in this hell on earth, sometimes believing he is witnessing his own burial and reading his own name in the death notices on the walls of the cemetery, he can still recall a world literally glowing with beauty. He describes cypresses by night, noticing how – as in the works of Van Gogh – they seem to brush the stars; at other times he strolls through gardens so beautiful they appear paradisical.

"I walk across a ground of dreams"

He calls these excursions his "imaginary days", sharply delineated from the "real days" in which he experiences nothing but trouble and strife dictated by the war: bag inspections at the checkpoints, soldiers′ malice and contempt for the civilian population, road blocks and arbitrary flare-ups in the fighting that make him fear for his sheer survival. Yet on so many occasions, he manages to turn away from all that; he thinks he hears Beethoven′s "Moonlight Sonata" and then "peace descends and I walk across a ground of dreams".

That′s one way of reading these miniatures, most of them no longer than one or two pages – as testimonies to a defiant resistance against impending obliteration, as a determined battle cry against the cynicism of barbaric warmongers. "Furiously", the narrator in the story "Chagall" refuses to submit to the intimidation at the checkpoints and go home quietly.

He takes his friend by the hand, determined to find a way through their maltreated city come what may, without coming up against one of the despised roadblocks. And after many vain attempts he finally does manage to climb the park wall. "And on three I shouted: ′Come on, dive into the sky with me!′ And we floated high above, as free and untethered as Chagall′s figures in his bright blue skies".

Sensitively translated into German by Larissa Bender, these ′survival texts′ by a writer enduring in the "world of death" harbour beauty and atrocity side by side; they make for disturbing reading – simultaneously haunting and full of hope.

The disappearance of Razan Zeitouneh and her colleagues has been one of the greatest mysteries of the Syrian war – until today. DW's investigative unit hunted clues across six ... END_OF_DOCUMENT_TOKEN_TO_BE_REPLACED

How can the various realities of Kurdish life, shaped by depression, resistance and war, be depicted in art? This is the question addressed by the “bê welat – the unexpected ... END_OF_DOCUMENT_TOKEN_TO_BE_REPLACED

Millions of people in Syria's Idlib region depend on foreign aid that passes through only one border crossing. The UN mandate regulating passage through it will expire on 10 July ... END_OF_DOCUMENT_TOKEN_TO_BE_REPLACED

They’ve already got the Louvre; they’ll soon have a Guggenheim Museum as well – and now the Emirates have added literature to their quest for cultural supremacy in the Arab world ... END_OF_DOCUMENT_TOKEN_TO_BE_REPLACED

By stage-managing his re-election in a poll widely dismissed as a farce, Syria's President Bashar al-Assad has killed two birds with one stone: he has forced his compatriots to ... END_OF_DOCUMENT_TOKEN_TO_BE_REPLACED

END_OF_DOCUMENT_TOKEN_TO_BE_REPLACED
Social media
and networks
Subscribe to our
newsletter