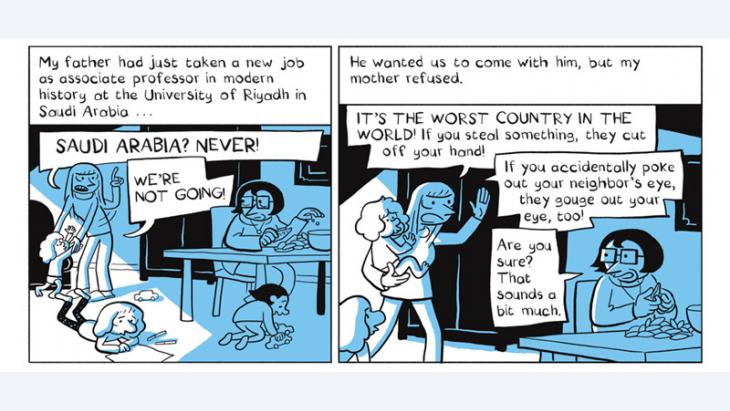 Book review: Riad Sattouf’s graphic novel "The Arab of the Future"
Between worlds

Despite his main focus being on his childhood and youth, spent between East and West, Riad Sattouf also describes the current state of the Arab world in his much-lauded graphic novel series "The Arab of the Future". By Schayan Riaz

The most recent volume is the fourth in the series. It continues the story of the young Riad Sattouf, though by no means concludes it – the final page opens up a whole new Pandora’s box – and covers the years 1987–1992. Once again, it is an endearing, tragi-comic look at the process of growing up.

Sattouf has already proved that he is a gifted illustrator in his previous work. He plays brilliantly with colour, choosing a red palette for the illustrations that show him as a child in Syria, while the chapters set in France, his second home, are drawn in a cool blue.

The author also continues to be torn between his two cultures and his parents. And what was hinted at in previous volumes is explored in greater depth here: the Arab father, who has not been particularly religious until this point, embraces Islam while working as a lecturer in Saudi Arabia and becomes more conservative. Sattouf’s French mother, meanwhile, becomes increasingly antipathetic to her husband and his new lifestyle; she enjoys her life in Brittany and wants to stay there forever.

But if there is one feature that defines Sattouf’s childhood and youth, it is the constant moving from one place to another, whether his mother likes it or not. As previously mentioned, the family is bounced back and forth between Syria and France because of the father’s academic work, which has also taken them to other parts of the Middle East, including Gaddafi’s Libya. 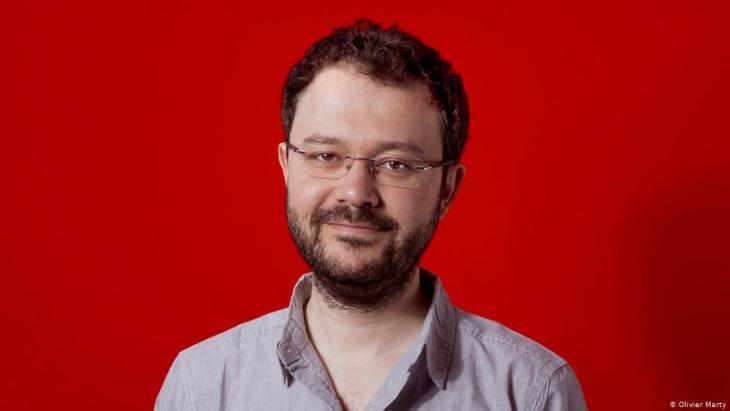 Riad Sattouf, born in Paris in 1978, has long been one of France's best-known comic artists and has received numerous awards for his work. He is the son of a French mother and a Syrian father. He grew up in Libya and Syria before returning to France at the age of twelve. He tells of his childhood in the Middle East in his graphic novel "The Arab of Tomorrow"

These parts of his life have had a profound influence on Sattouf – a fact which really comes across in the book. Identity, it almost goes without saying, is in any case a crucial theme in "The Arab of the Future". For Sattouf, it isn’t just a matter of his dual heritage, but of his appearance, which meets with curiosity everywhere he goes – and with a lot of suspicion and rejection.

In Syria, his blonde mane means he is branded a "Jew" – even by his own cousins. They can’t accept that this boy, who comes from outside and doesn’t even have a conventional Arab appearance, could ever be a real Arab.

In France, ironically, Sattouf has a similar experience; he isn’t seen as a typical French boy, either. His best friend even tells him it’s the Arabs who always cause trouble in gangs and attack people for no reason. Riad doesn’t fit that image at all. So he must be French, after all, even if he does have a strange Arab name...

The fact that anti-Semitism and racism are still alive and well in today’s world, and are even being made socially acceptable again by a few heads of state – or new right-wing populist masterminds and ideologues – makes Sattouf’s story all the more relevant. And once again, he shows young people expressing these prejudices and stereotypes in his pictures, demonstrating how necessary educational work is on a global scale.

The relationship between Sattouf’s parents is the explosive core of this fourth volume. The situation between the two is tense, to put it mildly – which will come as no surprise to readers of the previous books. The couple have always vacillated between love and hate. But this time, something fundamental seems to have changed.

Perhaps it’s because the father is absent from his family for extended periods; perhaps also because he has developed an increasingly difficult and disagreeable personality. It certainly has something to do with the attempt he is making to be a devout Muslim.

It never comes to a point where he forces his religiousness onto his family, but he still refuses to hear a single word of criticism about Islam. And when the mother provokes him, there is an unacceptable moment of rage – boundaries are overstepped in a way that cannot be forgiven.

Becoming a part of her

Alongside the main conflict between his father and mother, another important aspect of this book is Riad Sattouf’s own sexuality. He has entered puberty, and is starting to develop an interest in the opposite sex – be it his cousin in his Syrian home village of Ter Maaleh, the teacher with the long, black hair who tutors him at home, or one of the many girls at school with whom his friends are in love (and of course, he doesn’t want to look like an outsider).

Whether he finds these girls attractive or not, Sattouf’s humour really comes to the fore at these moments: the "prettiest girl in school", for example, has a look that takes a little getting used to.

On the topic of love, Sattouf comes up with a particularly nice idea: whenever he thinks of a woman, he pictures himself in miniature, and his beloved as a giantess. As if the woman were unreachable. But might this also be a symbol of emotional security and protection? In a particularly memorable episode of this fantasy, he even becomes one with a woman. He thinks about his latest obsession, the widow Juliette, who is the main character of a cartoon series. He realises he is becoming one with her: his legs stick out of her chest as he suddenly becomes part of her body.

It might occasionally seem disturbing, but Sattouf takes such an affectionate approach to the whole thing in his pictures that you have to believe in his childlike innocence. Here, Sattouf is the small, infatuated and intimidated Arab of the future.

The catastrophic human rights situation in Bahrain is being largely ignored by the rest of the world. Despite all the damning evidence, which includes a Human Rights Watch report ... END_OF_DOCUMENT_TOKEN_TO_BE_REPLACED

The many terrorist attacks France has faced over the last ten years have poisoned the political discourse, especially when it comes to migration. Since 2012 a relentless stream of ... END_OF_DOCUMENT_TOKEN_TO_BE_REPLACED

Etel Adnan, the artist who transcended the borders of culture and language, may have died in Paris, writes Lebanese author Elias Khoury, yet her death holds a mirror up to the ... END_OF_DOCUMENT_TOKEN_TO_BE_REPLACED

Shot, beaten to death or drowned: a demonstration by tens of thousands of Algerians ended in the "Paris Massacre" on 17 October 1961. Sixty years on, historians and victims' ... END_OF_DOCUMENT_TOKEN_TO_BE_REPLACED

Western states have fought against terrorism not only in Afghanistan, but also in Syria and Iraq – leaving behind people who were once their partners in fear and poverty. Hisham A ... END_OF_DOCUMENT_TOKEN_TO_BE_REPLACED

Newly discovered aerial photographs taken by the German Luftwaffe show what a keen interest the Germans took in British-controlled Palestine during the Second World War. Not only ... END_OF_DOCUMENT_TOKEN_TO_BE_REPLACED
Author:
Schayan Riaz
Date:
Mail:
Send via mail

END_OF_DOCUMENT_TOKEN_TO_BE_REPLACED
Social media
and networks
Subscribe to our
newsletter