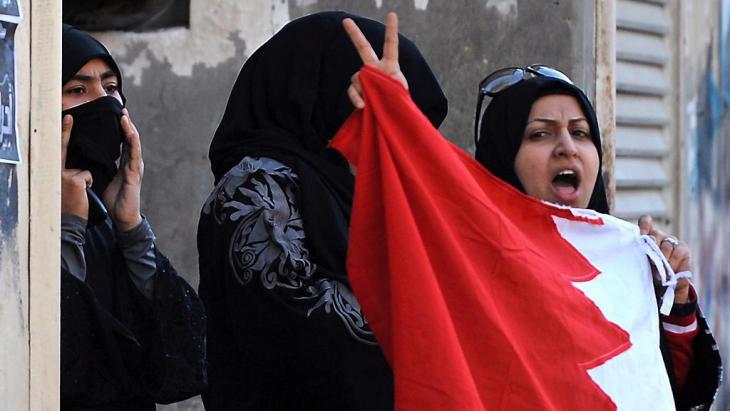 Sectarianism instead of revolution

The Gulf states were among the many countries enveloped by the Arab Spring. However, authorities there skilfully managed to play Sunnis and Shias off against each other as a means of dividing the protest movement. Initially, the tactic proved successful, writes Toby Matthiesen in his book "Sectarian Gulf". A review by Jannis Hagmann

Political scientist Toby Matthiesen thinks not and challenges this viewpoint in his new book, "Sectarian Gulf." Bahraini coffee culture is more of an incidental topic for Matthiesen; he focuses instead on the mass protests in the Gulf kingdoms, which were in no way left untouched by the Arab Spring. 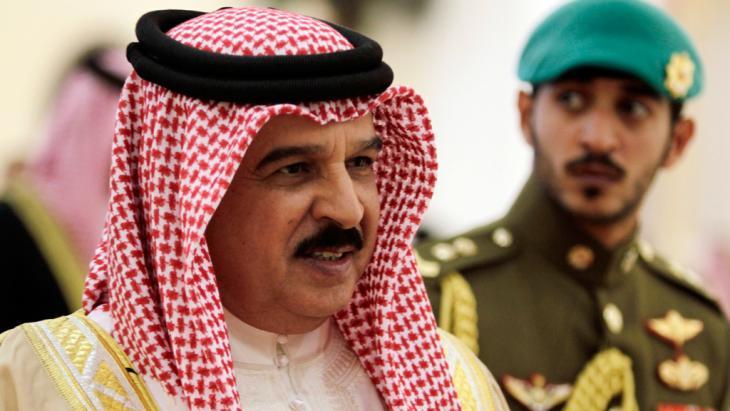 Examining the uprisings in Bahrain, Saudi Arabia and other Gulf states, he demonstrates that the tensions between Shias and Sunnis cannot be attributed to a hatred spanning several centuries. Instead, according to Matthiesen's central thesis, governments in the region have specifically played one group off against the other. The rulers of the Gulf states reacted to the Arab Spring with repression and sectarian discrimination, splitting societies into Sunni and Shia camps and creating a "sectarian Gulf" in the truest sense of the phrase.

The chapters on Bahrain make up the core of the 130-page-long book. According to Matthiesen, one in four Bahrainis took part in the biggest street protests in 2011. However, unlike in Tunisia, Egypt and Libya, the regime here managed to maintain its hold on power.

"For me and many others as well," writes Matthiesen, who just happened to arrive in the capital Manama at the start of the mass protests, "Bahrain in 2011 was a crash course in power politics."

Divide and conquer! This principle, which was perfected by the Romans, served the Sunni rulers of Bahrain well: by applying it, they succeeded in dividing the initially non-sectarian protest movement. Using sectarian rhetoric and questionable historical parallels, the authorities discredited the uprising as a Shia conspiracy, controlled by Iran and the Lebanese Hezbollah movement. 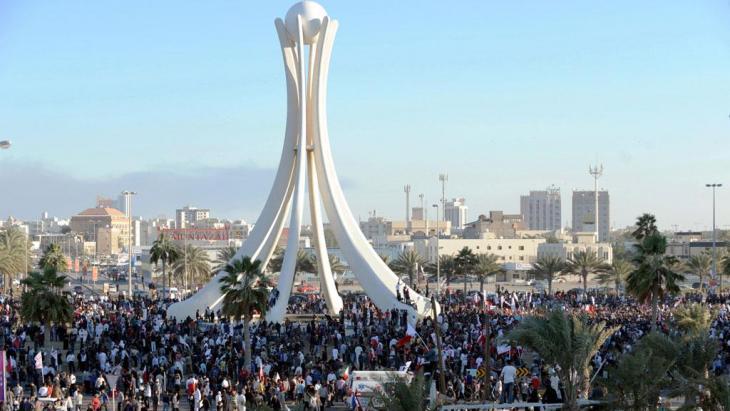 Pearl Square: the highly symbolic centre of the rebellion against the autocratic ruling royal family in Manama. Once the uprising was crushed, the government issued instructions for the monument on Pearl Square to be demolished in March 2011

Nevertheless, the new sectarianism in the Gulf was not simply a fantasy that governments instilled into their peoples. According to Matthiesen, as soon as it came into existence, the "sectarian Gulf" began to grow. Several people thrived under the new status quo. Matthiesen refers to these individuals as "sectarian identity entrepreneurs". Accordingly, the well-organised Shia opposition groups grew in strength and eventually asserted themselves on Manama's Pearl Square.

Matthiesen's accounts of events are sometimes richly detailed and he peppers his narrative with personal anecdotes. For example, he tells of a young Sunni woman he encountered on Pearl Square at the start of the uprising. Three months later, they met again by chance; this time, however, she was with a group of regime supporters.

Claiming that she was disappointed by the increasingly Shia character of the protests, she turned her back on the regime critics and even broke with her Shia friends, with whom she had initially protested. The "sectarian Gulf" had become reality.

Only a few days after the first demonstrations in Bahrain, the Shias in neighbouring Saudi Arabia also rose up. Matthiesen writes, however, that the solidarity rallies in the eastern province of Saudi Arabia were counterproductive from a Bahraini perspective. They merely strengthened the resolve of the leadership in Riyadh to crush the Bahraini uprising out of concern for their own interests. In March 2011, Saudi tanks rolled over the bridge and into Bahrain. The Saudis wanted to prevent the precedent of a revolution in a Gulf kingdom at any cost. 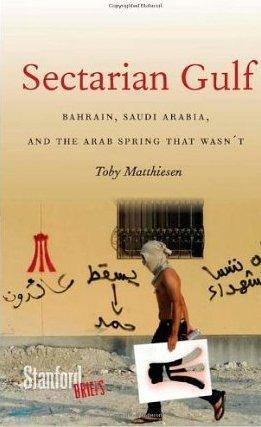 According to Jannis Hagmann, Toby Matthiesen's book "Sectarian Gulf" is a well researched book that helps readers understand the changes taking place in the Gulf states

Who benefits from the sectarian tension?

However valuable this record of the largely neglected protests in the Gulf states may be, many readers will find the book's descriptive narrative form long-winded. After Bahrain and Saudi Arabia, Matthiesen also covers Kuwait and the other monarchies of the Arabian Peninsula. Although the sections on Oman, the United Arab Emirates and Qatar are indeed interesting, they don't provide any truly new perspectives.

Instead, the reader would have been better served with a more detailed explanation of Matthiesen's theoretical approach. His concept of "sectarian identity entrepreneurs", which was inspired by the Lebanese context, leaves the reader perplexed. Who are these individuals, whose social "status is dependent on their skilled manipulation of sectarian borders"? How do they profit from sectarian tensions?

There is also the question of Matthiesen's methodology. Although the author provides numerous examples of the increasingly sectarian rhetoric of governments and the media, he fails to explain how he measures this increase and to back up his claim that sectarianism has never before played such a major role in the region as it does today.

Nonetheless, "Sectarian Gulf" is an extremely well researched contribution to understanding the transformations occurring in the Gulf states which – according to the author – are far from over. "Civic activism has been suppressed, but it will not disappear forever," he writes.

According to Matthiesen, sectarianism, repression and generous gifts of money will not suffice as long-term solutions. He does not believe in a "monarchic exception", an immunity of the Arab kingdoms to any revolutionary protest movements. Nevertheless, he neglects to predict whether change will come via revolution or reform.

Home
Print
Newsletter
More on this topic
The Bahraini Activist Ala'a Shehabi: "We Are Being Spied On"Political Crisis in Bahrain: Reformers on the DefensiveInterview with Maryam al-Khawaja: ''The Regime Oppresses All Bahrainis''Interview with Ali al-Jallawi: ''Bahrain Has No Future under This Government''
Related Topics
Arab Spring, Arabellion, Confessionalism, Democracy and civil society, Sunni-Shia tension
All Topics

Yazz Ahmed is one of the most exciting personalities on the lively London jazz scene. Her complex musical suites combine the traditions of her Bahraini roots and jazz ... END_OF_DOCUMENT_TOKEN_TO_BE_REPLACED

Substantial numbers of schoolchildren in the Gulf are losing their ability to communicate in Arabic. The development may well herald the onset of language loss in the region. By ... END_OF_DOCUMENT_TOKEN_TO_BE_REPLACED

You can’t change regional geography, notes the political analyst Khaled Hroub. Iran and the Arabs will always be neighbours, but we can change and re-shape history and politics. ... END_OF_DOCUMENT_TOKEN_TO_BE_REPLACED

The crisis between Saudi Arabia, UAE, Bahrain and Egypt on the one hand and Qatar on the other appears to be approaching tipping point. The possibility of Doha's departure from ... END_OF_DOCUMENT_TOKEN_TO_BE_REPLACED

A little-noticed subtext to furious protests across the Middle East and North Africa against US President Donald J. Trump's recognition of Jerusalem as the capital of Israel is ... END_OF_DOCUMENT_TOKEN_TO_BE_REPLACED

In the race to buy influence, garner soft power and win over hearts and minds, those involved in the three-month old Gulf crisis are hell-bent on raising the stakes. Commentary by ... END_OF_DOCUMENT_TOKEN_TO_BE_REPLACED
Author:
Jannis Hagmann
Date:
Mail:
Send via mail