In his new novel, award-winning author Sherko Fatah delves deep into the history of the 1970s Palestinian terror movement "Black September" – a thrilling tale of special agents which boasts no heroes or victors and is indisputably relevant to our times. By Volker Kaminski

Following the expulsion of the Palestinians from Jordan in 1970, unrest is growing in the Middle East and civil war threatens to break out in Lebanon. Beirut becomes the centre of various militias and terror groups, mainly operating in secret – these include, first and foremost, the "Black September" movement, which was responsible for the attack on the Israeli team at the Munich Olympics in 1972.

As unforgettable as the images of this attack now are, little is known about the bloody aftermath and the continuing expansion of intelligence activities of rival groups from among the Palestinians and the Israeli and American secret service in the Middle East.

Fatah’s novel begins with an action scene: the murder of the Jordanian Prime Minister in a Beirut hotel, an obvious act of retaliation following the expulsion of the Palestinians from Jordan. Fatah lets the action unfold as if in slow motion: the Prime Minister who strides along the hall is "a stately man of at least fifty". He reaches for his gun at the moment of the attack to fend off his assailants, "but the lapel of his jacket was in the way, his hand couldn’t reach the clasp, a mere ten centimetres away and he hardly registered the hail of bullets which knocked him to the ground…"

Between authenticity and fiction

The novel alternates between document scenes from history (such as the murder of the Prime Minister in 1971) and fictitious events in which Fatah primarily conveys his protagonists’ thoughts, emotions and entanglements, all of which remain close to historical reality. 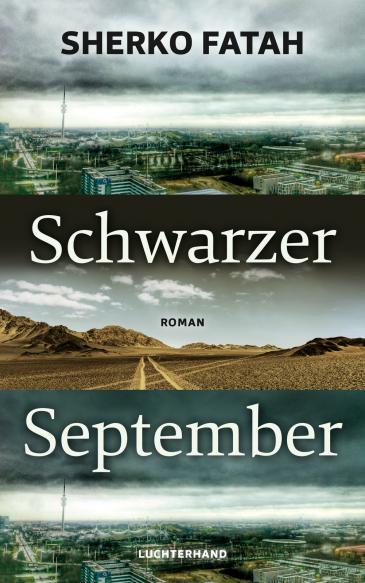 Tension-laden spy thriller set against the tensions of the Middle East conflict and the Cold War: Sherko Fatah's novel "Black September" is both deeply bleak and highly literary. Sherko Fatah has been nominated several times for the Leipzig Book Fair Prize (2008 with "The Dark Ship", 2012 with "A White Land") and was shortlisted for the German Book Prize in 2008 with "The Dark Ship"

This enables him to ‘give a voice to the extremists’ alongside intelligence agents and informants, which, as he said at the Internationale Literaturfestival Berlin, "is a legitimate cause within literature". Many scenes contained within the novel happened "exactly as described" and it was important to him to approach this controversial material with "empathy" instead of mere "knowledge".

There is no real main character in the novel; the perspectives change, as do the fields of interest. Sometimes it’s an agent from the American Embassy in Beirut, elsewhere it’s young fighters and "soldiers" of the liberation movement, but the stories on each side do not unfold separately; there are secret connections, a tightly-woven web of disloyalty and betrayal.

Thus, we bear witness to the unstoppable rise of a young, homeless Palestinian, Ziad, who is recruited by the Palestinian secret service, works as a messenger in Marseille and later, after his training in the camps in the Middle East, becomes an armed terrorist fighter.

But Ziad is also working for the CIA, carrying dossiers, writing reports for Victor, one of the leading agents in Beirut: his enmeshment in the terrorist causes leads him to lose hold of the reins and become a victim of, and a willing enforcer to, superior, more powerful people.

A meeting with the "Red Prince"

Ziad hates himself for his betrayal but when he meets a great icon of the Palestinian movement in Beirut, the "Red Prince" Salameh – a charismatic man with cold eyes – he senses that he is not on safe ground and his doubts, fears and feelings of ambivalence are never far behind.

Fatah succeeds in creating a network of agents, double-agents, informants and informers and fills out the selective perspectives of his very varied characters to produce a panorama – all without the reader losing the thread. He does not see fit, here, to aim too precisely for the plot points of a classic special agent novel, or to drive the action on with events. He considers it more important to look deeply into his protagonists, to visualise their feelings about the actions they are forced to take, or their impotence.

The agents and fighters actually spend most of their time on standby, waiting at the entrances to buildings, observing, or sitting in hotel rooms, on terraces or in rooms at the agency, their thoughts and memories circling round and round aimlessly. The job of an agent before the digital era means painstaking reading of dossiers, hours of interrogations and assessing photographs and these often bleak tasks resonate in Fatah’s calm, detailed prose.

It’s as if this is "a slow-burning war", in which all the participants are waiting for a big bang – which ultimately arrives when the American Embassy becomes the target of a devastating bomb attack.

The novel’s connection to Germany comes in the form of three young students from Frankfurt, who initially travel to the Middle East as observers. Sick of their parents’ world, schooled in left-wing ideology and on the run from "the unyielding reality of their homeland", they soon become willing participants in the terrorists’ fight, firmly convinced that their actions are part of the revolutionary revolt against American and Zionist imperialism.

Their naivete reflects to some degree the fanaticism of young fighters today, who sign up to supposedly good causes in order to act as "cogs in a huge machine" and "fall prey to the pros", which is how Fatah describes their role at the Literaturfestival. A highly literary novel with a deeply bleak atmosphere.

Home
Print
Newsletter
More on this topic
A portrait of Sherko Fatah: Reality is an adventureSherko Fatah: "The Dark Ship": Man, a shard in the sandInterview with Vénus Khoury-Ghata: Bidding farewell to Arabic
Related Topics
Book reviews, History of the Near and Middle East, International terrorism, Islam and the West
All Topics

Nine victims of the right-wing extremist murderer of Hanau had a migration background. The motive for the crime is clear and unambiguous: racism. Sheila Mysorekar from the "Neue ... END_OF_DOCUMENT_TOKEN_TO_BE_REPLACED

The template of the mentally disturbed gunman doesn't fit. Seeing himself as a spearhead, heralding a new rise to power, the murderer of Hanau placed himself squarely in the Nazi ... END_OF_DOCUMENT_TOKEN_TO_BE_REPLACED

A newly leaked document confirms how China is imprisoning Muslim minority Uighurs based solely on their religion. Naomi Conrad met with a whistle-blower and visited relatives of ... END_OF_DOCUMENT_TOKEN_TO_BE_REPLACED

Education is the key to the future. Muzoon Almellehan has known this since she was 14 years old. But she lives in a Jordanian refugee camp. And since then she has been fighting ... END_OF_DOCUMENT_TOKEN_TO_BE_REPLACED

Michael Frey has written a fascinating book about the contemporary political thinker Nassif Nassar. Since 1967, Nassar has devoted his life’s work to the question of a fair social ... END_OF_DOCUMENT_TOKEN_TO_BE_REPLACED

The Kurdish YPG militia did the heavy lifting in the fight against the "Islamic State", yet many foreign YPG adherents, including Germans, have come home to find themselves under ... END_OF_DOCUMENT_TOKEN_TO_BE_REPLACED
Author:
Volker Kaminski
Date:
Mail:
Send via mail

END_OF_DOCUMENT_TOKEN_TO_BE_REPLACED
Social media
and networks
Subscribe to our
newsletter