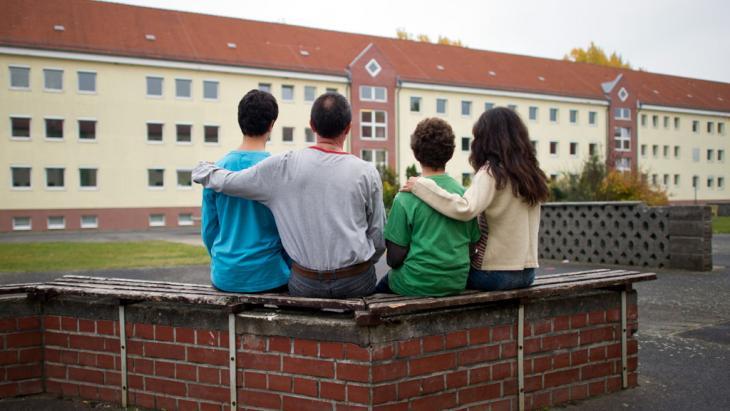 Germany is proud of its culture of democracy and the rule of law. But how proud should it be of the way it treats those who help Syrian refugees threatened by starvation and mass murder at home to enter the country? In 2013 and 2014, several German-based Syrians have been tried in court for helping their compatriots to flee to Europe. Stefan Buchen has written a book about the matter. By Martina Sabra

Over 11 million Syrians are on the run from war, hunger and death. Most of them are in Syria or the neighbouring countries of Lebanon, Jordan and Turkey. Only a few hundred thousand want to flee to Europe – a minority. Yet the EU has sealed its borders, with entry visas now almost impossible to procure.

This is why these people's only option is often to risk life and limb by entering the EU illegally. They need support to get into Europe. The people who help them are known in German as "Fluchthelfer" (escape helpers). They arrange false papers, transport, food, clothing and accommodation for them and co-ordinate the various stages of their escape. These people have to be paid.

In German, people who help others to escape from one country to another are called "Menschenschmuggler" (people smugglers). Some of these smugglers are primarily interested in profit and pay little attention to whether their "customers", the refugees, arrive safely at their destinations. Yet there are also escape helpers who aren't motivated by money but by the fact that it is their relatives, friends or acquaintances who are asking them for help.

This distinction ought to be significant in legal terms in Germany of all places, where many people only survived or made their way to freedom thanks to escape helpers during the Nazi dictatorship that lasted from 1933 to 1945 and the era of the Berlin Wall, which lasted from 1961 to 1989.

Yet that is far from the case. Although it is perfectly clear that a terrible war is raging in Syria, Germany is treating Syrian escape helpers like serious criminals – even if they can prove that they have acted out of humanity. German judges, state prosecutors and politicians have publicly branded Syrian escape helpers as supporters of terrorism and accused them of crimes they have not committed.

For their part, many media outlets unthinkingly spread these prejudices, branding escape helpers as "unscrupulous human traffickers" or "murderers" and contributing to the destruction of people's professional and social existences. 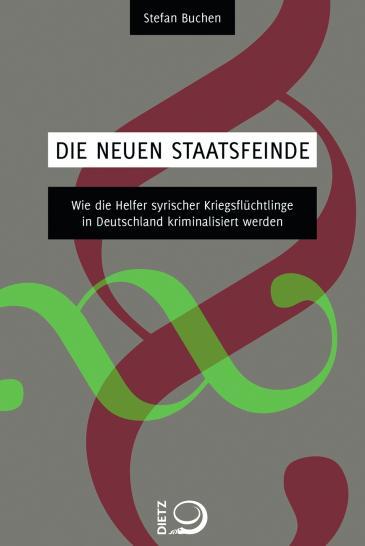 According to Martina Sabra, Stefan Buchen's account of the investigations, court cases and sentences reads like the account of a scandal. The book, she says, "is as gripping as it is disturbing"

What that can mean in specific cases is the subject of a new book, as gripping as it is disturbing, by the German TV reporter and Middle East expert Stefan Buchen.

The story Buchen tells begins on 29 January 2013. On that day, the federal police in Berlin and the state prosecution department in the city of Essen announced that they had smashed an "international people-smuggling gang" as part of a Europe-wide operation.

Under the codename "Cash", they reported that homes had been searched and suspects arrested in 37 places across Germany. The GSG 9 task force was deployed in the town of Ahlen in Westphalia. Arrests were also made in Greece and Poland. The "head of the gang", according to the press release, was a 58-year-old Syrian living in the west German city of Essen. The authorities estimated he had made a 300,000-euro profit out of the activities. Although they didn't find any cash, the police seized his family home.

Stefan Buchen, who writes for Germany's highly respected political TV programme "Panorama", knows Syria well. The way the police and the state prosecutors present the case made him curious. Were the suspects really serious criminals out to make a quick buck?

Buchen researched extensively, conducting numerous interviews with all those involved and working his way through mountains of files relating to the investigation. Gradually, a very different picture emerged: the "head of the gang" was not a professional human trafficker, but an engineer who went to work every day and had nothing to do with aiding escapes until the outbreak of war in Syria in the autumn of 2011.

His profits – if he actually made any – were comparatively modest. The group was not an organised "gang", but a loose network of Syrians who had only come together at the beginning of the war and helped only Syrian refugees. None of their "customers" had felt threatened or even poorly treated during their journey.

War in Syria blocked out

But the judges and prosecutors see things differently. They insist on applying rulings on foreign residents and entry to the country, clinging to the letter of the law. They systematically block out the genuine threat that causes Syrians to flee their country. "The political character of this trial is the total de-politicisation of the situation," writes Stefan Buchen. "A highly political process with far-reaching moral implications is assessed purely according to the standards of criminal law."

The will to depoliticise the matter is also oppressively apparent in the lawyers' phrasing: the Operation "Cash" court records refer to refugees as "individuals willing to be smuggled"; the war in Syria is not referred to as such, but as "the escalating political situation".

Germany's history is also conveniently forgotten in the proceedings. Stefan Buchen reminds his readers that tens of thousands of Jewish and non-Jewish people were saved from annihilation by escape helpers during the Nazi era (1933–45).

He also points out how courts dealt with people smugglers in the 1970s, in the context of the divided Germany. One West German escape helper, for instance, successfully sued for his "fee" before a court in 1977. A family from East Germany, whom he had helped to escape, had tried to get out of paying part of the sum they'd agreed. Ironically, the "fee" that the West German judges awarded to the escape helper at that time was higher than the "fees" of the Syrian escape helpers today, in relative terms. 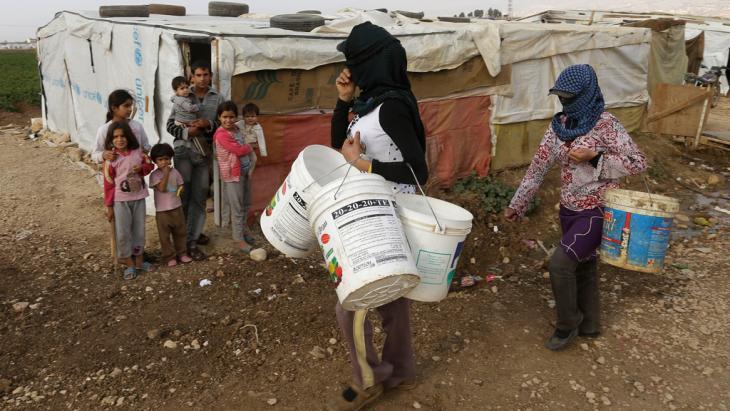 Fighting for survival: according to the EU, the Syrian conflict has created the world's largest humanitarian crisis: about 9.3 million people in Syria and 2.8 million refugees who have fled to neighbouring countries urgently need help

Duplicity in politics and media

Buchen also denounces the duplicity he sees in politics and the media. They claim that drastic measures are necessary to protect refugees from traffickers, he writes. But in reality, Europe has blocked almost every legal way in. "Smugglers offer a service in exchange for money. Refugees call on this service when they realise that there is no other, easier, less dangerous or less expensive way out of danger for themselves or their families," he notes.

Stefan Buchen does not paint the escape helpers on trial in Essen as moral heroes. None of the accused, he points out, acted exclusively for selfless humanitarian reasons; nor were they revolutionaries or regime opponents.

By the same token, he points out that none of the accused ever set out to become "smugglers. "They came to this activity because they have ties to Syria and because the war in Syria caused a terrible refugee tragedy. The accused smuggled Syrian refugees only, no one else."

The investigations and verdicts have had drastic consequences for all the escape helpers on trial and their families. The engineer, now 60, lost his job and had to pay a penalty of over €150,000; a Syrian-French taxi driver was sentenced to two and a half years' imprisonment; a young Syrian-Greek father who worked as a waiter is also behind bars, separated from his wife and three children.

One of the book's strengths is that the author gives an impressive and emotional presentation of his personal encounters with those involved, while also handling the subject matter and vocabulary very precisely.

Some of the legal material is rather complex for lay readers. Nevertheless, the book is extremely readable and gripping – an enthralling read that raises many important questions on the relationship between what is right, what is legal and what is moral in Germany.

Home
Print
Newsletter
More on this topic
Interview with the political scientist Abdel Mottaleb El-Husseini: Lebanon: "A mixture of vacuum and volcano"Syrian refugee children: A lost generation in the makingEscaping the Civil War in Syria: Humanity amid the Horror
Related Topics
Human rights, Humanitarian aid, Migration in Germany, Policy on refugees and migration, Refugees, Syrian Civil War
All Topics

Germany's foreign policy is explicitly values-based. But what happens, Ralf Bosen asks, when democracy, the rule of law and human rights collide with the logic of trade and ... END_OF_DOCUMENT_TOKEN_TO_BE_REPLACED

No other Western poet was arguably so well-versed in the Koran or so fascinated by Islam as Germany's national hero, Goethe. In a new publication that examines all Goethe's ... END_OF_DOCUMENT_TOKEN_TO_BE_REPLACED

A deluge of books, movies, series and cover stories: ever since the events of 9/11, the West has seemed almost manically preoccupied with Islam. Yet this has rarely led to deeper ... END_OF_DOCUMENT_TOKEN_TO_BE_REPLACED

Twenty years after 9/11, the world is faced with the dual challenge of Islamophobia and anti-Westernism. Ahmet Kuru argues that Muslims in the West, well versed in both Western ... END_OF_DOCUMENT_TOKEN_TO_BE_REPLACED

Two decades after the attacks of 11 September 2001, the West faces the shattered debris of its failure – not only in Afghanistan, but also in Iraq, Syria, Libya and Yemen. What ... END_OF_DOCUMENT_TOKEN_TO_BE_REPLACED

Twenty years after 9/11, the United States is recalibrating its war policy. However, its assertions that the era of endless wars is over are a myth, writes Maha Hilal END_OF_DOCUMENT_TOKEN_TO_BE_REPLACED
Author:
Martina Sabra
Date:
Mail:
Send via mail

END_OF_DOCUMENT_TOKEN_TO_BE_REPLACED
Social media
and networks
Subscribe to our
newsletter