Swimming against the Tide

Amira Hass is the only Israeli journalist living in the Palestinian territories – scrutinising reality in the West Bank, publishing facts and giving people a voice. Igal Avidan read her latest book, Reporting from Ramallah: An Israeli Journalist in an Occupied Land.

Amira Hass has broken out of this cycle. She is the only Israeli journalist living in the Palestinian territories. Hass has made it her business to scrutinise reality in the West Bank, publish facts, and give people a voice. In so doing, she has made the complexity of the Middle East conflict a little easier to comprehend.

She gives us an insight into the failure of the Camp David summit, the suicide bombers, the thoughts of an Israeli sharpshooter, the logic of Palestinian militants, the huge resistance of both peoples to any form of self-criticism, and their unshakeable conviction that the use of more deadly violence is the only way to bring the other side to its senses.

Shaped by the family experiences of the holocaust

Hass began reporting from Gaza for the left-wing liberal Israeli daily Haaretz in 1991. Two years later, she decided to move there to live. There she wrote her first book: Drinking the Sea at Gaza: Days and Nights in a Land under Siege. She then moved to Ramallah. Her mother's experiences in the holocaust drive Hass and have shaped the way she views the world.

One summer's day in 1944, Hannah Hass was marched from a train into the concentration camp at Bergen-Belsen. Having endured a ten-day journey in a train carriage usually used to transport cattle, the prisoners were on the brink of death.

Some German women on the roadside looked on in boredom as the train full of Jews passed by. To this day, it is the fear of becoming a passive observer of other people's suffering that motivates Hass.

The 47-year-old journalist makes no bones of the fact that she takes the side of the simple Palestinians and not that of Yasser Arafat's regime. For Hass, being objective and being fair are two completely different kettles of fish. Above all, journalism is about the control of the powerful. And for Hass that means the Israeli authorities and not the Palestinians.

The starting point for her work is her deep-seated opposition to the Israeli occupation, which she believes should be continued under the auspices of the Oslo Accords, albeit in a more intelligent way.

She is one of the only Israelis to hold this opinion. Nevertheless, she still has the full co-operation of the army, which never refuses to give her information and has even invited her to make a speech to officers about the behaviour of soldiers at road blocks.

The Camp David summit did not fail, as the Israelis claim it did, because Yasser Arafat rejected Barak's generous offer, but because the offer on the table would have made it impossible for a Palestinian state to survive.

According to Hass, because Israel wants to retain three large settlements, the West Bank would have to be split up into three isolated cantons: the North, the South, and East Jerusalem.

At the same time, the roads linking these cantons would remain under Israeli sovereignty. Moreover, the Maale Adumim settlement near Jerusalem – which Sharon, as he recently declared, never intends to give up – now covers 5,300 hectares. That's more than the entire city of Tel Aviv. However, Maale Adumim has a population of only 25,000; Tel Aviv 360,000.

There were three reasons for the start of the armed intifada in the autumn of 2000. The first reason was the Palestinians infuriation at Israel's expansion of its settlements while peace talks were ongoing. Secondly, their anger about the political ineptitude of corrupt Palestinian civil servants who lined their own pockets. 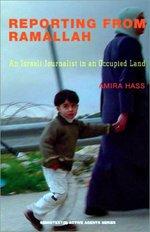 The fierce competition for supporters between the secular Al-Aksa Brigade and the Islamic Hamas also fed the flames of escalation, as did the fact that the Palestinian Authority did absolutely nothing and made no attempt to rein in the violence. Instead it allowed enraged Palestinians to exact revenge for the murder of children and civilians.

Even though very few Israelis have anything to say in Amira Hass's new book – with the exception of the army spokesman in the form of his succinct statements – a conversation with an anonymous Israeli sharpshooter offers an interesting insight into the mentality of the army, without resorting to an all-out defamation.

Anyone over twelve years old is not a child?

First of all, the sharpshooter admits that "they allow you to shoot more" after an attack in which Israelis have been killed. He goes on to say that some soldiers – but not him – are "obsessed with shooting". He confirms that the army has forbidden soldiers to shoot children; a ban that is repeated "very often".

When Hass asks how this ban is expressed in words, he replies: "children under the age of twelve must not be shot at." The soldier expounds: "Youngsters over twelve are a different matter: they aren't children any more." The army spokesman, on the other hand, did not want to say at what age a Palestinian stops being a child.

Palestinians often talk to her too. One of them complained that the militants are "children, half illiterate, foolish amateurs that are encouraged to play the hero." The reason for this is that Arafat's Fatah movement is in huge disarray.

Four Al-Aksa Brigade members who are on the run from the Israelis try to radiate confidence, but admit that that imprisonment of fellow militants has dealt them such a blow that they are already looking for ways of getting out. They themselves justify the killing of Israeli civilians with the argument that Israel does not show any regard for Palestinian civilians either.

Back in September 2000, Hass asked a question that becomes increasingly relevant as time goes by: how would Israel deal with the Palestinian masses "joining Allah and his disciples on earth (Hamas)" if the Palestinian Authority collapsed? She warned that the Palestinian security forces would not be able to restrain Hamas for ever. Sadly, her prediction has already become reality.

But anyone who believes that there is no end to the hatred between Israelis and Palestinians and that the two have no future with each other will often be taken by surprise by this book. Some Israelis send their former Palestinian workers money to survive until such time as they can work again.

"Arabic and Hebrew are related"

Furthermore, in the Daheisheh refugee camp, many Palestinians have taken it upon themselves to learn Hebrew. Their teacher, a journalist, learned the language while he was in prison several years ago. "Arabic and Hebrew are related," he explains and points out that the bible was written in Hebrew. One of his students, a Palestinian security officer, is taking part in the classes because he believes that one day, Palestinians and Israelis will co-operate again.

END_OF_DOCUMENT_TOKEN_TO_BE_REPLACED
Social media
and networks
Subscribe to our
newsletter