Skip to main content
Book Review: "The Fear of Peace" by Moshe Zimmermann

Why has the peace process in the Middle East stagnated? In his new book, Moshe Zimmermann claims that the reason is that the Israelis fear peace more than they fear the state of war. Ina Rottscheidt spoke with the renowned Israeli historian and publicist 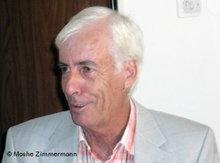 Is Israel afraid of peace? "In a war, you have a good idea what to expect. This is not necessarily the case with peace," says Moshe Zimmermann

​​Hosts of mediators, diplomats and politicians have travelled to the Middle East in recent years in attempts to revive the peace process. There have been many discussions, appeals and plans, but in the end, there has been no movement. On the contrary, the positions of the Israelis and the Palestinians seem more entrenched than ever.

This is because Israel has more to fear from peace than from war – a provocative thesis put forward by the Israeli author and historian Moshe Zimmermann in his new book Die Angst vor dem Frieden. Das israelische Dilemma (The Fear of Peace. The Israeli Dilemma).

"In a war, you have a good idea what to expect. This is not necessarily the case with peace," says Zimmermann. "Many people suspect that behind peace lurks deceit and peril, and that readiness to compromise will be construed as weakness."

In accordance with this way of thinking, peace can only be achieved by keeping the enemy in check. Back in 1993, Prime Minister Benjamin Netanyahu wrote in his book A Place Among the Nations, "In the Middle East, security ranks above peace and peace treaties. Whoever fails to understand this will remain without security and without peace."

According to Benjamin Netanyahu, "In the Middle East, security ranks above peace and peace treaties. Whoever fails to understand this will remain without security and without peace"

​​This policy of deterrence has become an existential issue for the military and political classes in Israel, concludes Zimmermann in his book. "In any case, the assumption is that everyone surrounding Israel is intent on destroying the country, and, as Islamist movements such as Hamas and Hezbollah are regarded as spearheading the anti-Israeli camp, retaliatory strikes always seem to be the appropriate action to take in order to re-establish the deterrent effect."

Dealing with the threat

There can be no doubt that Israel faces a number of real dangers such as terrorism, threats of annihilation from Iran, hostile neighbouring states, and the collective memory of the Shoah. There are certainly enough parties with belligerent attitudes towards Israel, and Zimmermann doesn't dispute this. On the contrary, he writes in his book that these are reasons enough to be interested in peace. "The public discourse on these threats could be conducted in a different way, investigating the root causes of the problems and engaging in a search for alternatives for the future that could diffuse the threats or lead to some kind of turnaround."

Yet exactly the opposite has taken place; fears are constantly growing. This is substantiated by opinion polls conducted in recent years. There are many Israelis, claims Zimmermann, who believe that peace will only be possible when the Arabs and Palestinians are no longer there or are under Israeli control.

According to Zimmermann, although these views are actually held by a small, radical minority in Israel, this minority is holding the majority hostage with its message. "Of course, the majority of Israelis want to live in peace, enjoy life, be prosperous, have a good time, watch the World Cup, and so on. But there is a minority in this society that is interested in opposing peace."

"Of course, the majority of Israelis want to live in peace, enjoy life, be prosperous, have a good time, watch the World Cup, and so on. But there is a minority in this society that is interested in opposing peace" says Zimmermann

​​He raises the example of the settlers who don't want to give up their settlements on the West Bank. And then there is the military, which relies on a policy of deterrence; peace and compromise would entail an end to their status in society. This is why stirring up fears has become an instrument of power for the military, believes Zimmermann.

The majority allows this to take place, because majorities are usually lethargic and comfortable with the status quo. In addition, Jewish history lets them draw the conclusion that refraining from the use of weapons means weakness and catastrophe.

"When it is stressed that we have always been the victims, that it should never be allowed to happen again, but that Arabs and Palestinians are pursuing this very aim, then any appeals on the part of the Israeli Left to consider alternatives do not seem very convincing," say the historian.

A change in attitude – but how?

In his book, Zimmermann concludes that a change in attitude, a move away from the fixation on fear and deterrence, is the only way out of the current dilemma. Such a change took place in 1993, when during the negotiations for the Oslo Accords, Israel decided to speak to the Palestinians and the PLO, leaving old prejudices and fears aside. 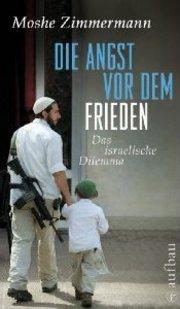 Zimmermann feels strongly that it is not he who is anti-Israeli, but the government, which is isolating Israel with its policies

​​This all ended abruptly in 1995, however, with the murder of Israeli Prime Minister Yitzhak Rabin. How such a change in attitude in Israel could be revived and to what extent the Palestinian side must make a contribution are issues not addressed by Zimmermann in his book.

The author has earned a great deal of criticism in Israel for his book, where he is occasionally regarded as a traitor who spreads anti-Israeli theories.

The real anti-Israelis, counters Zimmermann, sit in the government. He says, "The government is pursuing anti-Israeli policies because its actions lead to Israel being isolated, peace being prevented, and ultimately to the threat of catastrophe!"

Interview with Uri Avnery
"Israel Lacks a Leader"
Uri Avnery, a journalist and founder of the Israeli peace movement "Gush Shalom", says that Israel lacks a strong leader who would be able to push through a peace agreement with Syria and the Palestinians. He spoke with Lina Hoffmann

Dossier
Israeli–Palestinian Dialogue
Beyond the violence in the Middle East conflict, there are many individuals and initiatives working towards lasting peace in the region. Our new dossier presents just some of them

END_OF_DOCUMENT_TOKEN_TO_BE_REPLACED
Social media
and networks
Subscribe to our
newsletter