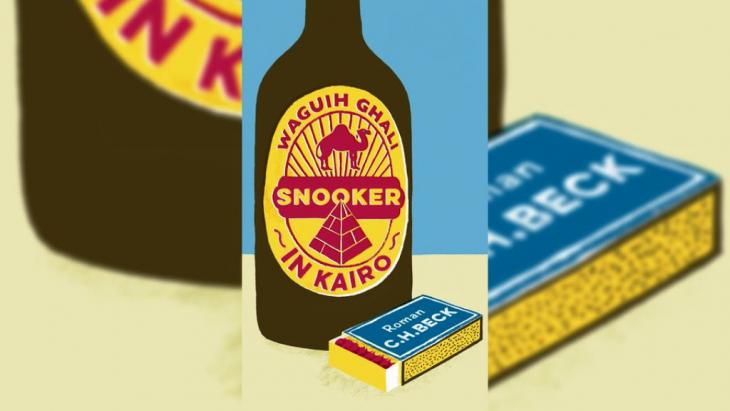 The cruel disillusionment of an entire generation

The novel "Beer in the Snooker Club" by the Egyptian author Waguih Ghali was first published in London in the mid-1960s. It was rediscovered during the Arab Spring. A German translation has recently been published. Sonja Zekri read the book

Which place in Egypt remains untouched by revolution, military coups, fanaticism? Yes, OK, the pyramids, sure. But then there's also this patch of green on a Nile island in Cairo: the Gesira Club. The avenues as straight as an arrow, the pools a brilliant turquoise, the membership exclusive – the former British officers' club is an oasis of stability. In the shade of ancient trees, the wealthy play polo and bridge, each perfectly well aware of the political leanings of the other, their financial situation, their wedding plans.

It's the same today. Just as it was then, when the young Ram prepared to while away an apparently endless afternoon at the club. Waguih Ghali paints this scene with such a light touch, with such serenity and, at the same time, with such inescapable hopelessness, that these few pages alone reflect all the rancorous charm of his rediscovered novel "Beer in the Snooker Club".

Ram, a Christian, a Copt from a good family, unfortunately destitute, borrows five pounds from a waiter at the club, which is how he scrounges his way through life, and uses it to play bridge with Americans, consciously ignoring their inane chit-chat (for example when they persistently make "abracadabra" out of the name Abdelkarim) drinks beer and wins 200 dollars. Then he decides he wants to go swimming.

The American woman doesn't have a swimming costume. Ram goes to borrow one for her from a friend. Is she prettier than me?, asks the Egyptian woman. He replies: "At least she's not a bloody virgin any more, like you are." This flippant remark places us – irrespective of the club – very decisively not in Egypt's inhibited present, but in the 1950s, an era when for a few years at least everything appeared possible and everything went downhill. 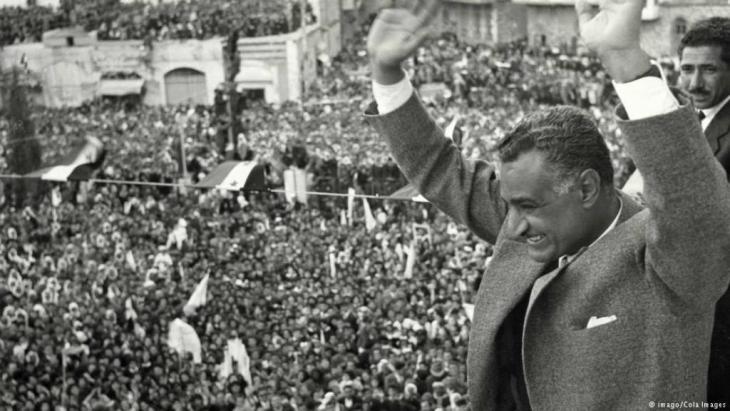 More of the same: Waguih Ghali describes the Egypt of the 1950s under President Gamal Abdel Nasser (pictured here), a time of dashed hopes: "But with every passing year, the cruelty of the military dictatorship became more evident, and the promise of a redistribution turned out to be a straightforward exchange of elites," writes Sonja Zekri

The British had been hounded out; the monarchy that served the British was gone; the Free Officers under Gamal Abdel Nasser announced they would led Egypt, no, the entire Arab world, to proud self-determination.

But with every passing year, the cruelty of the military dictatorship became more evident, and the promise of a redistribution turned out to be a straightforward exchange of elites – whereas in the old days it was the rich who took taxis, now it's the rich and the army, says one driver. And Ram, this lost soul, becomes just that bit more lost.

Ghali's book was published in English in the mid-60s in London, and if its Arabic translation was read in Egypt before the Arab Spring as almost painfully relevant, then this expressed a yearning for those secular, cosmopolitan years, an era of open-mindedness and elegance also romanticised by Alaa al-Aswany in his bestseller "The Yacoubian Building".

But perhaps, who knows, this new interest in Ghali's book was also a premonition. After all, although Ghali deals with politics both precisely and incidentally, his book is first and foremost the chronicle of a rebellion that failed catastrophically, the cruel disillusionment of an entire generation: the Arab Spring was no different.

At the start of the novel, Ram protests heroically against the British troops on the Suez Canal, enthuses about Nasser and at a party hosted by his aunt, tells a cousin he can "wipe his ass" with American democracy. But in the end, he joins a secret organisation that buys pictures of torture victims from Egyptian policemen and in doing so, is "unable to shake off the terrible feeling that the pictures would be less gory if we weren't paying for them".

Meanwhile he conducts a passionate but hopeless relationship with Edna, a member of one of the country's wealthiest Jewish families, "our Woolworths", as Ram says, mockingly. Although they avoid talking about the Middle East conflict, politics stands like a wall between them. "Why don't you go away, Edna?", asks Ram, and of course he means emigrating to Israel. "Because I'm Egyptian," answers Edna, who will ultimately pay a high price for this patriotism. 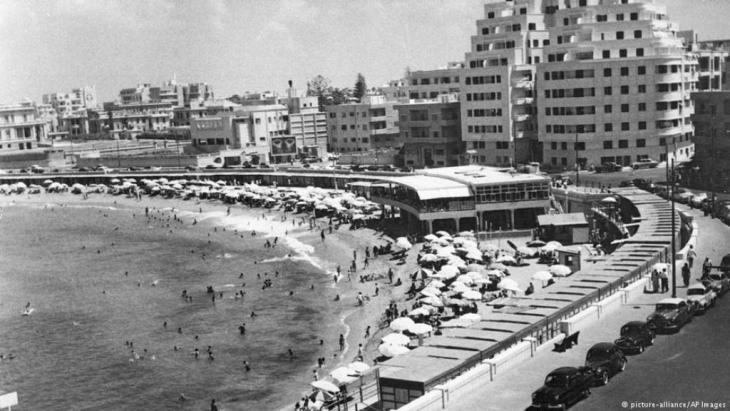 "Ghali's book was published in English in the mid-60s in London, and if its Arabic translation was read in Egypt before the Arab Spring as almost painfully relevant, then this expressed a yearning for those secular, cosmopolitan years, an era of open-mindedness and elegance also romanticised by Alaa al-Aswany in his bestseller 'The Yacoubian Building'," writes Sonja Zekri

The end of an illusion

Ghali describes a class that was at the latest eradicated in 1967 with the Six-Day War, and that from today's perspective appears vulnerable, arrogant and wondrous, rather like a vibrantly coloured but extinct butterfly.

The other side is that this dazzling, amusing milieu, which appears at first glance to be so similar to the West, always just represented a fragment of society, and that the rest of Egypt appears yet again only on the edges of this dignified tableau in the form of chefs, nannies or six-year-old car washers. Ram too, the moody cynic, who trots out the names of British politicians, characters from British novels and types of British beer like someone playing thimblerig, but who can't even speak Arabic properly, talks disparagingly of simple Egyptians, referring to them as "Fellachen", or peasants.

How unusual, how isolated Ghali also thought at the time, is evident from the fact that Ram is brought into contact with regular Egyptians by – of all people – the Jewish woman Edna and that it is she who teaches him and his more straightforward, consistent friend Font to read the right books and ask the right questions, until both men see themselves less and less as Egyptians, and more and more "as part of humanity in general".

Edna, the Jewish woman, is the driving force behind Ram's political incarnation. She even fulfils his greatest dream, a trip to England; after all, Ram is absolutely convinced that "life only existed in Europe." It is an exemplary error, because Europe has long finished with him and those of his ilk.

When the visa applications make no headway, Ram and Font turn to the director of their English school, who explains to them the utilitarianism of the empire: "You two are Copts," he said, "and because the current rulers are all Muslims, they're not going to any effort to give you a visa."

And so, when he finally reaches England, Ram is seized with grave doubts as to whether this "life" doesn't signify the end of something else, of something more precious; whether the "sophistication of Europe" isn't "killing" something within him, a clarity of origin, an authenticity that he had previously spurned. His consciousness divides in two, is observer and participant in one. It is a post-colonial wound pain, but the way Ghali describes this inner conflict not only lends it something universally valid, but something universally human.

This is all the more tragic when you consider that Waguih Ghali himself had to live in foreign countries – Egypt was too dangerous for him as a Communist. And after periods of time in Paris, Sweden and Germany, he settled in London. It was there, in 1969, that Ghali – described by a German acquaintance in the introduction by his girlfriend and translator Diana Athill as a "modest, gentle and gazelle-like creature" swallowed 26 sleeping tablets in Athill's apartment and died. He wrote in his farewell letter that it was "the only authentic act in my entire life".

With all due respect for this last expression of will, one must disagree. Seldom has the relationship between the Arab world and the West been drawn with such shrewdness, clarity and relentless consistency.

Archaeologists have uncovered the remains of an ancient city in the desert outside Luxor in Egypt. They say it dates back to the golden age of the Pharaohs more than 3,000 years ... END_OF_DOCUMENT_TOKEN_TO_BE_REPLACED

The Prophet Muhammad never executed anyone for apostasy, nor encouraged his followers to do so. Nor is criminalising sacrilege based on Islam’s main sacred text, the Koran. In ... END_OF_DOCUMENT_TOKEN_TO_BE_REPLACED

Surging coronavirus cases in many parts of the world have overshadowed the start of this year's Muslim holy month of Ramadan, with festivities once again curtailed by contagion ... END_OF_DOCUMENT_TOKEN_TO_BE_REPLACED

German Middle East analyst Guido Steinberg and television journalist Ulrich Tilgner have both published new books on the conflicts in the Middle East. Their analyses and their ... END_OF_DOCUMENT_TOKEN_TO_BE_REPLACED

Televised Turkish dramas are all the rage in the Middle East. A young Ottoman TV Empire has been expanding its soft power by harnessing regional dialects, Arabic names and viewers ... END_OF_DOCUMENT_TOKEN_TO_BE_REPLACED

Nawal El-Saadawi has died in Cairo at the age of 89. The prominent doctor, activist and author became internationally known for her outcry against female genital mutilation and ... END_OF_DOCUMENT_TOKEN_TO_BE_REPLACED
Author:
Sonja Zekri
Date:
Mail:
Send via mail

END_OF_DOCUMENT_TOKEN_TO_BE_REPLACED
Social media
and networks
Subscribe to our
newsletter