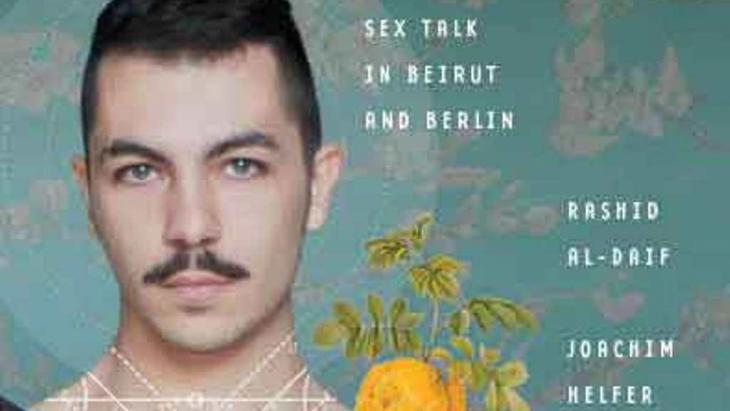 Book review: "What Makes a Man? Sex Talk in Beirut and Berlin"

An honest and painful cultural exchange

In 2003, two authors – one from Germany, one from Lebanon – spent time in each other's company and countries as part of a cultural exchange programme. Twelve years on, a book resulting from this encounter has been published: one section of the book details the Lebanese author's reaction to meeting a homosexual; another is devoted to the German author's rebuttal of this account. According to Nahrain Al-Mousawi, it is an unsettling read on many levels

In the aftermath of 9/11, the cultural-exchange programme "West-East Diwan" was established to promote intercultural dialogue between German and Arab intellectuals and writers. In 2003, the well-known, widely read and oft-translated Lebanese writer Rashid al-Daif spent several weeks in Germany visiting Joachim Helfer, a younger, less known and un-translated German writer. In turn, Helfer spent some time with al-Daif in Lebanon. Al-Daif is most well-known for his renowned novel "Dear Mr. Kawabata" about Lebanon's civil war, as well as eight other novels, all of which have been translated. Helfer is a young author in Germany and has written three novels.

The result of this exchange was al-Daif's literary account, which focused on Helfer's homosexuality. Al-Daif's account has been alternately read as either incisive, naïve, honest or just downright offensive. Helfer published his own point-by-point rejoinder to al-Daif's account, and these two accounts (in addition to literary analysis by scholars at the end) make up the text of "What Makes a Man?", compiled and translated into English this year. What results is not only a rare unsettling exploration of entrenched attitudes toward gender, sexuality and heteronormativity across cultural lines, but also an unsettling of both the forms of fiction and essay, as a means to understanding the "other".

After their respective journeys, al-Daif first published "How the German Came to His Senses" independently in Arabic as a "novelised biography", which he regarded as a narrative of his encounter with Helfer and a dialogue with his cultivation of sexuality – a professed homosexuality, a lived bisexuality. So to maintain thematic unity he enhanced and modified his account. Yet, al-Daif's narrative is not just a depiction of a German author's exploration of his sexuality. Rather, the narrative humorously engages his Arab readership in reflections on local notions of masculinity and masculine sexuality. 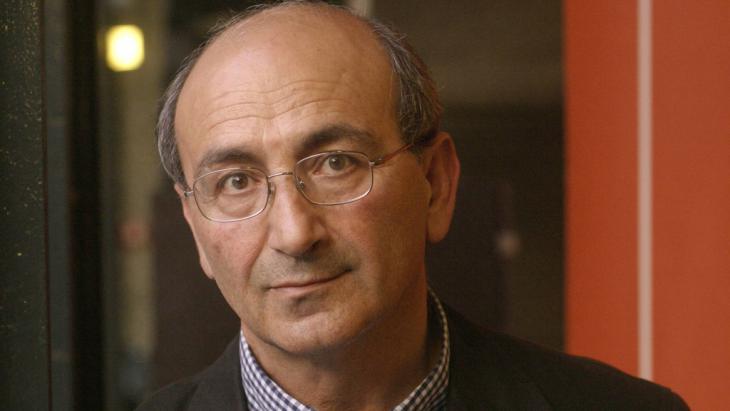 According to Nahrain Al-Mousawi, "al-Daif's narrative is not just a depiction of a German author's exploration of his sexuality. Rather, the narrative humorously engages his Arab readership in reflections on local notions of masculinity and masculine sexuality". Pictured here: Rashid al-Daif

Focus on homophobia in the Arab world

Al-Daif even goes so far as to interiorise and perform a dialogue about a fraught Arab masculinity that is invariably laughable and cringe-worthy. For example, he first shrugs off the news that Helfer is gay and then exaggerates his anxiety about their future encounter by taking on what he considers local homophobic concerns about gay proximity and sexuality. One way he does this is going on for page after page about the pride Arab men have in their body hair and the desirability of hirsutism, so much so that he worries it will be at the centre of Helfer's uncontrollable desire for him.

On the one hand, al-Daif honestly engages with the entrenchment of homophobia in local culture by performing and mirroring back this absurd hetero-anxiety to his Arab readership. On the other, this engagement, albeit honest, also succeeds in essentialising Arab culture as entirely homophobic, masculinist and boorish, at least where it concerns men.

In fact, in one of Helfer's indignant responses to al-Daif's account – the second part of the book – he accurately describes al-Daif as completely out of touch with not only Beirut's gay sub-culture, but also related feminist movements. While al-Daif assumes a dominant homophobic voice, tremulously anticipating a gay ensnaring desire, an uncontrollable homosexuality, Helfer's ripostes pointedly indicate al-Daif missing out on different types of masculinity and sexuality in his own city, Beirut.

However, the second part of the book, wherein Helfer responds to each point he thinks al-Daif is making, calls into question what the book claims to deliver – an unmediated, direct dialogue. Helfer did not leave al-Daif's text as it was produced, but cut it up into paragraphs and chose which paragraphs to subject to pointed, mocking, irritable rebuttals. Because al-Daif didn't have the opportunity to respond – the alternating passages show only comments by Helfer on al-Daif's text but not the other way round – Helfer gets the final word.

Moreover, because al-Daif's text was a literary work describing his encounter with Helfer, while Helfer's piece was more of a disputation focused on rhetoric (suitable for a philosophical essay), the result is an uneven book with mismatched genres. But it is not just the lack of dialogue and the mismatched genres that create an unevenness or imbalance. 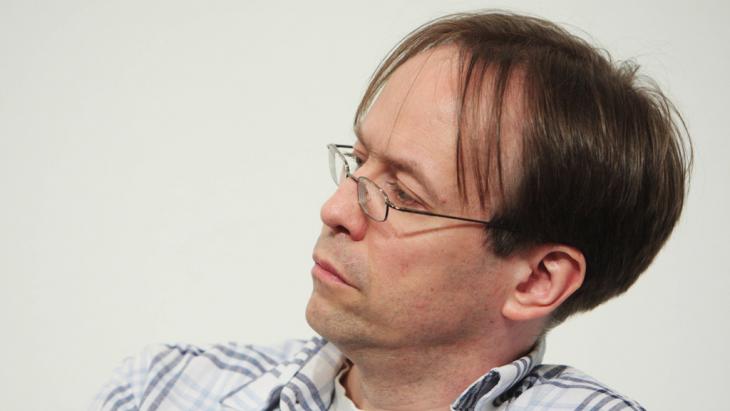 Following the publication of al-Daif's "novelised biography" entitled "How the German Came to His Senses", Helfer published his own point-by-point riposte to al-Daif's account. Both texts have been translated into English by Ken Seigneurie and Gary Schmidt and published as one volume: "What Makes a Man?: Sex Talk in Beirut and Berlin". Pictured here: Joachim Helfer

Stinging riposte instead of direct dialogue

Just as with al-Daif's texts, there are cringe-worthy sections in Helfer's text too. But they are devoted entirely to the enlightened West and its counterpart, the backward Middle East, which fall too easily into a variety of binaries he sets up – Germans/Arabs, liberated/repressed sexuality, absolute equality/patriarchal oppression. However, this hierarchy Helfer sets up is built on shaky foundation: legal recognition of same-sex unions in German civil law doesn't automatically translate to public acceptance. Plus, this social approval is often based on class and generational belonging. As much as Helfer wants to convey the utopic end of fixed identities in Germany, he ends up suppressing the differences within its society.

It is very easy to feel sympathy for Helfer when al-Daif titles his text "How the German Came to His Senses" in reference to Helfer's new relationship with a woman after years of living with his male partner, suggesting a heterosexual experience as a sign of return to reason. Moreover, to see a respected author simply reduced to his homosexuality in al-Daif's text definitely made Helfer more sympathetic – until he began rigidly ascribing stereotypes to the entire Arab world based on a few weeks in Beirut.

Perhaps al-Daif was prescient about such an exchange when he suggested in the beginning of his text that sexuality is "the battlefield between Arab tradition and Western modernity". But this book also suggests it is a weapon wielded to destroy or build anew cultural identities. While this cultural exchange was not quite enlightening, it was at least unwittingly honest, and even at times painfully so.

Home
Print
Newsletter
More on this topic
Interview with the South African imam Muhsin Hendricks: "Islam does give us leeway to think"Interview with LGBT rights activist Arsham Parsi: ''Rights are never given; we have to fight for them''Gay rights in Tunisia: Not illegal, but tabooAttitudes to sexuality among Muslim students in Germany: Challenging homophobiaJoachim Helfer / Rashid al-Daif: "The Homosexualization of the World"
Related Topics
Arabic literature, Book reviews, Dialogue of Cultures | Intercultural Dialogue, Homosexuality, Literature, Sexuality and eroticism in Islam
All Topics

Business in the Moroccan city of Tangiers is booming due to its location at the nexus of global trade routes. But many locals are failing to reap the benefits. What they crave ... END_OF_DOCUMENT_TOKEN_TO_BE_REPLACED

Morocco and the European Union are at cross purposes when it comes to the Western Sahara. And, as Germany does not support Moroccan claims to the territory, a major conflict has ... END_OF_DOCUMENT_TOKEN_TO_BE_REPLACED

Jewish voices are much more diverse than the public often sees. Jewish men and women who oppose the injustice of Israeli occupation in the West Bank deserve our respect and ... END_OF_DOCUMENT_TOKEN_TO_BE_REPLACED

They’ve already got the Louvre; they’ll soon have a Guggenheim Museum as well – and now the Emirates have added literature to their quest for cultural supremacy in the Arab world ... END_OF_DOCUMENT_TOKEN_TO_BE_REPLACED

The Germans have a fragmented perception of the conflict between Israel and the Palestinians, and their discourse is dominated by certain catchphrases. All the while, there is a ... END_OF_DOCUMENT_TOKEN_TO_BE_REPLACED

An unusual organisation brings Jews and Muslims together to fight hate and promote dialogue. In the small central German city of Marburg they have been jointly calling for an end ... END_OF_DOCUMENT_TOKEN_TO_BE_REPLACED
Author:
Nahrain al-Mousawi
Date:
Mail:
Send via mail

END_OF_DOCUMENT_TOKEN_TO_BE_REPLACED
Social media
and networks
Subscribe to our
newsletter