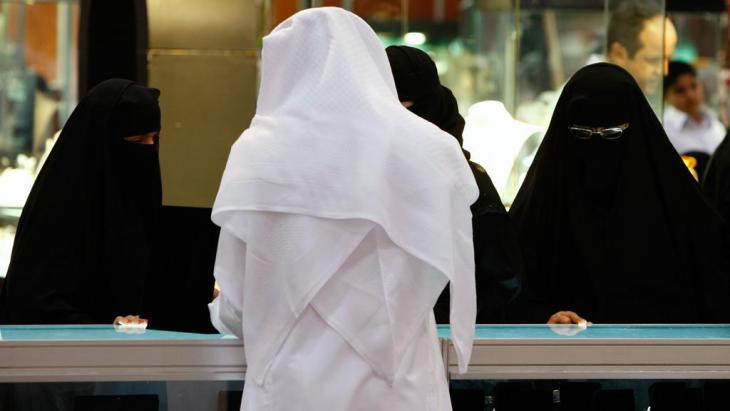 Yousef Al-Mohaimeed's "Where Pigeons Don't Fly" begins with the melancholic self-imposed exile of a young Saudi man in a small UK town. Originally published in 2009 in Arabic, the novel became a bestseller and was translated to English by Robin Moger last year. While Al-Mohaimeed's short stories and novels are mostly set in Saudi Arabia, have garnered acclaim and prizes, and been translated into several languages, this controversial author's work has had to be published outside the kingdom due to censorship. By Nahrain Al-Mousawi

In "Where Pigeons Don't Fly", an Arabic dial tone is all it takes to set Fahd Al-Safeelawi sobbing on the train as he remembers his life in Saudi Arabia, beginning with the moment that put in motion his decision to leave indefinitely.

From the very first scene in Saudi Arabia, Al-Mohaimeed renders a vivid portrait of a repressive society where the most mundane and quotidian of acts are endowed with an acute social significance. When Fahd and his girlfriend go to Starbucks, their fear and anxiety at being caught in the act – of simply drinking coffee together – are palpable to the reader and become further magnified as their fear at being discovered mounts. The ever-vigilant and intrusive Committee for Virtue and Prevention of Vice, which polices the lives of young Saudis, fills Fahd with dread.

Before he and his divorcee lover were detained by members of the committee for drinking coffee together in public (while unmarried), his rendezvous with a couple of girlfriends are set in a frenzied loop of malls, corporate coffee shops and rented rooms – the banal scenes of romance in a segregated society made dangerous by the ubiquitous and intrusive eyes of the committee. But for the young, liberal and artistically inclined protagonist chafing under the constraints of Saudi society, the sheikhs of the committee are merely one long, probing arm of the ubiquitous body of oppressive religious fundamentalism in the kingdom. 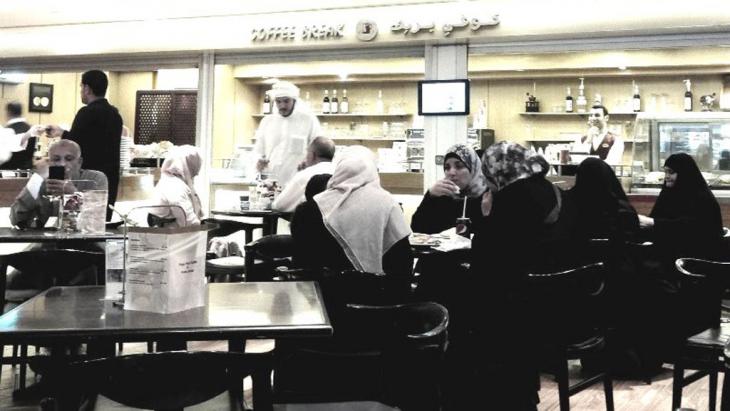 People in a cafe in Saudi Arabia. The country's religious police, officially known as the Committee for the Promotion of Virtue and the Prevention of Vice, roam public places to ensure the sexes do not interact and to impose Sharia law. The protagonist in Yousef Al-Mohaimeed's novel "Where Pigeons Don't Fly" is plagued by memories of playing hide-and-seek with the agents of this committee

Under the oppressive watch of the religious police

While the invasive committee, identifiable by their black beards, feature in other parts of the novel, where they are seen patrolling the streets for secret trysts, other less organised and formal bodies of religious fundamentalism attempt to police the most innocuous and tame of activities.

At a literary festival, extremist students try to climb on stage during a poetry reading and "hand out advice to what they see as the sinning, misguided poets and guide them to the path of righteousness." During the play that follows, entitled "A Moderate Without Moderation", they hurl their sandals and destroy the set. Fighting erupts until a security guard shoots in the air, all while an American critic invited to speak about American poetry records the battle in the gender-segregated auditorium.

But for Fahd, even home provides no reprieve from the heavily policed world outside. When Fahd's father dies, his draconian uncle insists on marrying his mother. Into the previously loving and open home come new restrictions on everything from playing Monopoly, which is uncle calls "a snare of Satan and a distraction from true worship", to watching satellite TV and displaying artwork. For young Fahd, who is both an artist and art critic, this becomes unbearable.

His friend Saeed sums up the situation in the country succinctly toward the end: "Life here [is] unbearable …Nothing had changed for a hundred years. Life spun in place." So why does Fahd cry on that train from London to the coastal town of Great Yarmouth? The suffocating conditions under which people try to lead their lives drive Fahd out, so he certainly can't miss it.

Lingering trauma long after he has left 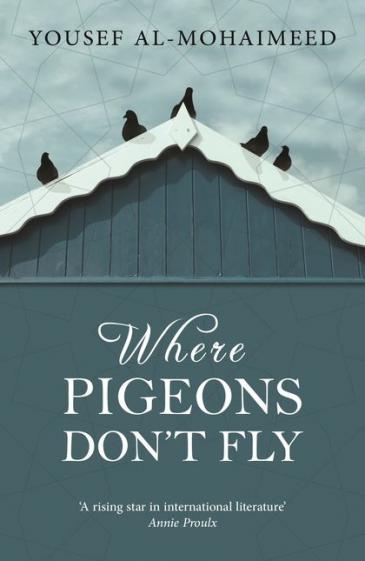 "Al-Mohaimeed relays the suffocating atmosphere Fahd experiences subtly through the restrained, apprehensive tone of a native as he is experiencing and trying to skirt around these social constraints and repressive conditions, rather than an outraged exile in the diaspora who is coming to terms with his trauma far from the site of its origin," writes Nahrain Al-Mousawi

Even though Fahd was on another continent, still "he was possessed by fear, a terror of the sheikhs – the fat men with long black beards he always saw at night, advancing with sharpened lances with which they pierced his pillow and riddled it with holes, the white feathers flying out until he couldn't breathe, and he would awake in a panic, feeling that he was choking."

Fahd appears to be suffering from trauma long after his self-imposed exile from Saudi Arabia begins. A dial tone is all it takes to trigger his old fears and set off a tearful episode and a morbidness he can't shake off even as he tries to enjoy his holiday from his London print shop job in a British seaside resort town.

While the text often reads like a study or an exposé in which Al-Mohaimeed reviews the various repressive social conditions under which people live in Saudi Arabia, the novel's structure is not particularly bound by realism. A chronological realist structure is abandoned in favour of shifts from various points of time, almost as if the narrator is trying to excavate the past to locate his own family's relationship to the root of authoritarianism and returning to the present to examine the results of his exploration.

Al-Mohaimeed relays the suffocating atmosphere Fahd experiences subtly through the restrained, apprehensive tone of a native as he is experiencing and trying to skirt around these social constraints and repressive conditions, rather than an outraged exile in the diaspora who is coming to terms with his trauma far from the site of its origin. Robin Moger's deft translation sharply captures the angst of both the moments when Fahd chafes against the strictures of his society as well as the heavy-hearted moments of life in the aftermath.

Home
Print
Newsletter
More on this topic
Book review: "The Bamboo Stalk" by Saud Alsanousi: A life uprooted and replantedNajwa Barakat on Arabic literature: Combating the desertification of Arab cultureAmjad Nasser on the role of Arab writers in Arab society: Speaking out in societies without wordsInterview with Saudi Arabian writer Raja Alem: "When I write I am free, like flying in my dreams"
Related Topics
Arabic literature, Book reviews, Democracy and civil society, Free speech and censorship, Human rights, Literature
All Topics

Chinese President Xi Jinping's visit to Saudi Arabia in December 2022 may have rattled Washington, but it simply highlighted the Arabs’ desire to diversify their foreign relations ... END_OF_DOCUMENT_TOKEN_TO_BE_REPLACED

Lebanon was long viewed as the Switzerland of the Middle East. Until relatively recently, billions were deposited in its banks. Gulf states were among the foremost investors in ... END_OF_DOCUMENT_TOKEN_TO_BE_REPLACED

At the end of every year, the team at Qantara.de gives you a run-down of the ten most-read articles on the site over the past 12 months. Here is a quick overview of the stories ... END_OF_DOCUMENT_TOKEN_TO_BE_REPLACED

According to a recent survey, half of all Iranians say that they have left Islam as a religion, while two-thirds believe Islamic law should be excluded from their legal system. In ... END_OF_DOCUMENT_TOKEN_TO_BE_REPLACED

Since Russia invaded Ukraine, Europe has been trying to find alternatives to Russian gas, inevitably zeroing in on the Arab Gulf states. In his commentary, Yemeni politician ... END_OF_DOCUMENT_TOKEN_TO_BE_REPLACED

Morocco has taken the 2022 World Cup by storm, with the northwest Africans reaching the semi-finals for the first time in their soccer history. As the knockout match approaches, ... END_OF_DOCUMENT_TOKEN_TO_BE_REPLACED
Author:
Nahrain al-Mousawi
Date:
Mail:
Send via mail

END_OF_DOCUMENT_TOKEN_TO_BE_REPLACED
Social media
and networks
Subscribe to our
newsletter