The relationship between the Muslim minority and the rest of German society is often dominated by mistrust and ignorance. And that's just what Bosnian Muslims in Germany want to break down – as go-betweens between the religions. Zoran Arbutina reports 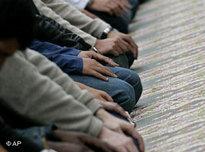 Mustafa efendi Klanco, the main Bosnian imam in Germany, says that Europe can only accept a form of Islam "in which people don't over-emphasise their religion"

​​The young imam Mustafa Hadzic shows off the Bosnian Islamic cultural centre "Gazi Husrevbeg" in Cologne with pride. The 3.5 thousand square-metre facilities house everything a modern "Dzemat" – a Bosnian religious community – needs: an impressive mosque, a house for the imam and the office, a large function room and a classroom for Sunday religion classes.

There is also a shop selling Bosnian food and a teahouse. The large courtyard has plenty of space for occasional bazaars, friendly chats or games of chess.

"We even offer sports activities in our small sports hall," Mustafa Hadzic says with enthusiasm. "And we have a folklore group, where we keep up our Bosnian cultural traditions. In Islam everything that makes people happy is also a part of our belief – which means all these activities are religious for us."

This holistic perspective is typical of Muslims from Bosnia, says the young imam. The majority of Bosnian Muslims are Sunnis and members of the Hanafi "madh'hab", a school of though regarded as particularly open to dialogue.

Over the centuries, the Bosnians developed a tradition of inter-religious harmony. The Muslim majority formed a functioning community with the Catholic and Orthodox Christians and Sephardic Jews, living together in a single state over many generations.

This and over 120 years as part of the Christian-dominated Austro-Hungarian empire had a key influence on Islam in Bosnia, explains Mustafa efendi Klanco, the main Bosnian imam in Germany:

For many Germans, that sounds like the ideal and much-praised Euro-Islam: tolerant and open for dialogue. "That is what we live – and what we can contribute," Klanco says:

"Europe can accept this form of Islam, which is appropriate for secular states – an Islam in which people attend mosques but don't over-emphasise their religion." 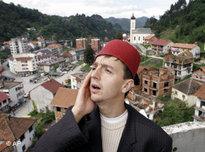 Bosnian Muslim imam Idriz Halilovic, calls to noon prayer from atop the White Mosque in Srebrenica

​​For Klanco, the freedom to live one's own faith and also allow other religions the same rights is a matter of course, as much so as accepting and following the laws of the worldly state in which one lives.

This basic attitude of "live and let live" is particularly important in the current discussion, in which Islam is often perceived as a security threat, says the Cologne imam Mustafa Hadzic:

"One of the basic premises of our teaching is that people who come here and ask for a visa automatically accept the obligation to respect the laws of the land," Hadzic comments. "If they break them, they also break their religious laws. Our religion allows us Muslims to live in harmony with the conditions here."

The main imam of the Bosnian Muslims in Germany, Mustafa efendi Klanco, calls for more solidarity and curiosity between the Muslim communities.

The dissent between the various different Muslim communities not only complicates dialogue with the state, it also makes dialogue between groups difficult. And this is a point where Bosnian Muslims would like to get involved as go-betweens, building a bridge:

"Just like in the past, we'd like to be a bridge, a binding force between the Muslims, a community that irons out or reduces the differences," says Klanco. "We'd like Muslims to get to know each other better. If they can't do that, how are they to get to know the Christians? And the Muslims here really need to find a common path in dialogue with the Christians and Jews."

Mustafa Hadzic is also looking for that path for his "Dzemat" in Cologne. The Bosnian Muslims in Germany are regarded as very well integrated – sometimes too much so, says the imam. For the young people of the second and third generation, religion is often unimportant. Many of them see their parents' old homeland as a sentimental legend, and prefer speaking German to their parents' language.

But they still send their children to Sunday school at the "Dzemat", pray in the mosque and meet up in the courtyard to drink tea and socialise with other people from the community. Most of them consider themselves European Muslims, representatives of a new, open Euro-Islam.

Islam in Bosnia and Herzegovina
"I am a Muslim - Don't Panic!"
Ten years after the end of the war, young Muslims in Bosnia and Herzegovina have found the courage to try and make things happen. But the West is squandering a great opportunity to see Bosnian-style Islam as both a bridge between East and West and a model for Europe. Tobias Asmuth reports from Sarajevo