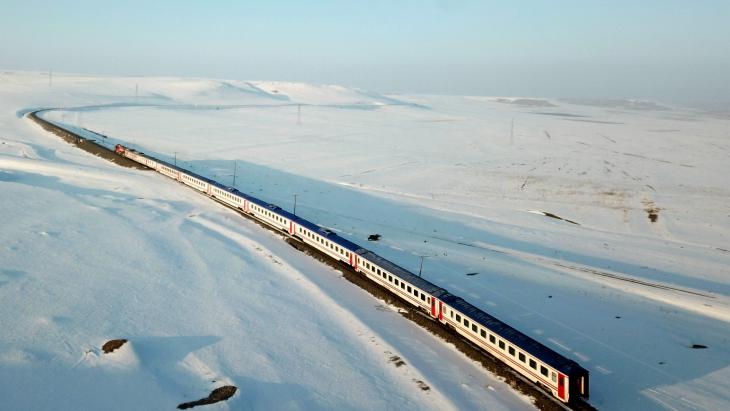 Named the Turistik Dogu Ekspresi locally, the train offers one of the expansive country's most coveted new experiences.

Its nine carriages wind their way around mountain bends on a 32-hour, 1,300-kilometre voyage from the capital Ankara to Kars, an ancient city near Turkey's rugged border with Armenia and Georgia.

The service was suspended less than a year after starting because of the coronavirus pandemic. But with restrictions easing, the sleeper is back. Tickets, though relatively pricey, are snapped up in minutes.

"The Ankara-Kars line is considered by travel writers to be one of the four most beautiful train lines in the world," Turkish State Railways director Hasan Pezuk told journalists.

"It is really a very special moment for me and my family," says Zulan-Nour Komurcu, 26, who is celebrating her birthday with them on board. "It's my present," smiles the brunette, who has decorated her cabin with purple lights, hung a furry wreath on the door and set out biscuits and a porcelain teapot on an embroidered tablecloth.

The train runs twice a week from 30 December to 31 March to make the most of the snow-covered landscapes. Its route is a miniature version of Russia's Trans-Siberian railway, says engineer Fatih Yalcin.

"There is always something to fix," he says, his head deep inside an electrical cabinet.

"Last week it was minus 24 degrees Celsius ... The water was freezing," he says, adding that it sometimes falls to minus 40.

"I intervene when required and without disturbing the passengers. Seeing them happy is a real pleasure for me."

Depending on the compartment, there are prayers or alcohol.

In the dining car, revellers can feast through the night under a nightclub-style mirror ball. This is where Ilhemur Irmak and her retired friends meet for tea as the sun sets in a blaze of colour. The 40 women hail from Bursa, a western province on the Sea of Marmara.

"We're in retreat from our husbands and our fathers," says Irmak, triggering laughter all round.

Like most passengers, they embarked with their own provisions: a veritable feast of specialities and sweets.

Another faster and less festive train runs along the same route in around 20 hours, without the scenic stops. But this train was designed for the sheer joy of travelling through spectacular but hard-to-access provinces such as Kayseri, Sivas, Erzincan and Erzurum.

And, of course, for partying through the night.

Lawyer Yoruk Giris and his two friends have made sure their supplies last until the end. A party animal, he has brought out a white light garland, a plaster snowman, candles and a portable speaker blasting out Turkish rock.

"It was an old dream," the smiling 38-year-old says, swaying, his table weighed down by whisky, delicacies and chilled beers. "We had to make something joyful out of it. We prepared a lot."

As the evening turns to night, people begin meeting up in the corridor to share music and dance. Among them, two couples in their fifties, "friends since high school", intend to "have a good time together".

One of them, Ahmet Cavus, admits feeling "nostalgia" for the train rides of his youth. "We revisit the journeys we made as children with our grandparents," Cavus says.

The train brings together an array of Turkish society, with people of all ages and styles, from the reserved to the unrestrained.

In Erzurum, the last stop before Kars at an altitude of 1,945 metre, several passengers perform a traditional dance on the frozen platform, with backing from the tea vendor's crackling radio.

The station's thermometer shows minus 11C but no one looks discouraged.    (AFP)

END_OF_DOCUMENT_TOKEN_TO_BE_REPLACED
Social media
and networks
Subscribe to our
newsletter