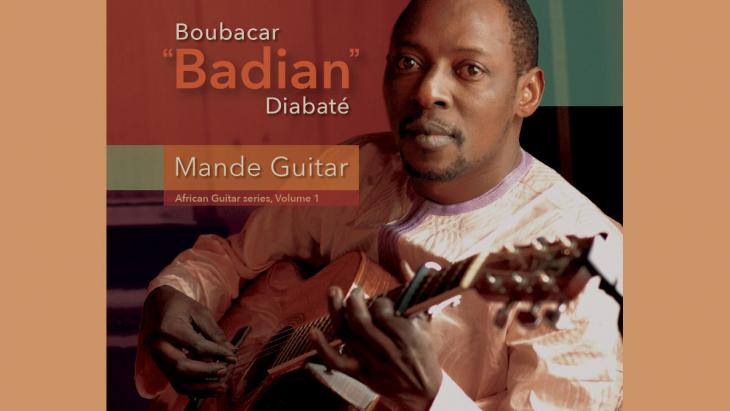 "Mande Guitar: African Guitar Series Vol 1" by Boubacar "Badian" Diabate is the first release on the Lion Songs Records label just established by esteemed music journalist Banning Eyre. Primarily an album of solo guitar tracks, each song on the album is a different exploration of Diabate's virtuosity. By Richard Marcus

Music from Mali has gradually entered the mainstream of pop culture, primarily through the work of the proponents of what's become known as Desert Blues. Solo artists and groups have propelled this genre to the forefront of our awareness. While there's no denying the compelling nature of this sound, it has come to dominate our perceptions of what Malian music, specifically Malian guitar music, sounds like.

This is doing a great disservice to a wonderfully diverse and elaborate musical culture that dates back literally thousands of years. Stringed and plucked instruments have always been at the centre of the region's culture. The griots in villages and communities across the region – who serve as oral historians, passing down the stories that were essential components of ensuring their culture thrived and prospered – have long used these instruments.

Traditionally, Mande music was performed using the ngoni lute, the kora harp and the wooden balafon. However, the music has moved with the times, and in various West African countries,  has migrated to the guitar. This is still the music of public celebrations – most often heard at wedding parties and other rambunctious events – continuing the tradition of being music for the community.

Guitar as a solo instrument

On the album Mande Guitar we are treated to the sound of the guitar as a solo instrument with only occasional accompaniment provided by a second guitar and percussion. Removed from its typical environment, you'd expect the sound to be somewhat diminished, but the opposite is true. In fact, with all the intricacies of Diabate's guitar work on display, the starkness actually makes for an incredibly compelling album.

The guitar is one of the most omnipresent instruments on the planet. We've all heard it played at some point in our lives. From classical musicians like Christopher Parkening and Segovia to the flamboyance of flamenco and the jazz stylings of Django Reinhardt and the pyrotechnics of rock musicians such as Jimi Hendrix and Pete Townshend, the instrument is ubiquitous.

It also means we might have become a little jaded. What more can the guitar have to offer? Well the answer lies right here on this album. Just as it seems so much of today's popular music has been revitalized by trips – whether physical or emotional – to Mali, so Mande Guitar has the potential to renew our appreciation of an instrument so many of us of now take for granted.

Of the eleven songs on this album, six feature Diabate on his own. The other five see him accompanied either by his brother Manfa or, on one track, "Bayini", by Banning Eyre. The only other accompaniment on the album is provided by Baye Kouyate, who provides percussion in the form of tamé and calabash on the song "Fadento".

This means this is primarily an album of solo, unaccompanied guitar playing. It takes a very special talent to pull that off without the music becoming boring. An entire album of one instrument could either become tedious or, at best, the songs could all quickly start to sound the same. Thankfully Diabate is an extraordinary musician and each song is a revelation.

One of the first things you become aware of on listening to the album is how you aren't able to distinguish between the songs he's playing by himself and the ones with accompaniment. His playing is so intricate that on the solo songs you'd swear there was more than one guitar being played.

Right from the opening track on the album, "L'amour", it is apparent that the listener is in for something special. His intricate playing style, where it sounds like he's literally picking out solo notes and strumming a rhythm at the same time, is a wonder. Elaborate melodies interweave and then evolve into new patterns all in the space of six minutes.

On some songs there is some overdubbing – I doubt even Diabate can play both a twelve and six string guitar at the same time as he's credited with on the 9th track "Korosa" – but that shouldn't detract from any of the wonder evoked by the man's playing.

As was previously mentioned, Mande guitar is centred around traditional music, and this recording is no exception. Eight of the songs are traditional songs arranged for guitar by Diabate. In fact, the last song on the album, "Bagounou", is described as being played in the manner his grandfathers would have played it on their ngoni.

Perhaps that's what makes this album so unique. Not only are we hearing the sound of the guitar, we're hearing it played as if it were another instrument. If you listen carefully to the plucking tones that sound like a second instrument, you realize they sound like the traditional ngoni. So not only has he adapted traditional songs to modern instruments, he's bridged the gap between the past and the present with the sounds he creates.

Each song on the album is a different exploration of Diabate's virtuosity on the guitar. Maybe it's because we've become so accustomed to amplification and all the electronic tricks used today that we've forgotten how inspiring it is to simply sit and listen to the acoustic guitar played with passion and joy.

You may think you've heard everything guitarists have to offer, but when you listen to this album you'll realize there's a whole world out there just waiting to be discovered. Boubacar "Badian" Daibate's Mande Guitar is one of those amazing albums that will make you rediscover why you love music so much. Not only does it bring you back to the roots of what makes the guitar a great instrument, it also introduces you to a whole new genre of music. Be prepared to be awestruck.

Ben Aylon’s debut international album sees him elevate the traditional music and instruments of Senegal and Mali into a fresh contemporary setting. Seven years in the making, " ... END_OF_DOCUMENT_TOKEN_TO_BE_REPLACED

Anansy Cisse's new release "Anoura" – literally 'the light' – is not only a fine example of Malian music, but the story behind the album is also a microcosm of the struggles ... END_OF_DOCUMENT_TOKEN_TO_BE_REPLACED

The end of July saw the launch of the African Union’s "Sauti" digital publication, the first young feminist platform in Africa, which this year showcases stories by female youth ... END_OF_DOCUMENT_TOKEN_TO_BE_REPLACED

Timbuktu, the ancient desert city in Mali, has always been shrouded in myths. Charlie English’s "The book smugglers of Timbuktu" proves that the city has not lost its magic. By ... END_OF_DOCUMENT_TOKEN_TO_BE_REPLACED

With "Amankor/The Exile", the Kel Tamashek band Tartit have produced another cultural treasure for the rest of the world to appreciate. Their original intent may have been to keep ... END_OF_DOCUMENT_TOKEN_TO_BE_REPLACED
Author:
Richard Marcus
Date:
Mail:
Send via mail

END_OF_DOCUMENT_TOKEN_TO_BE_REPLACED
Social media
and networks
Subscribe to our
newsletter