In his latest book, Brian Whitaker takes a look at the so-called 'Arab malaise'. In it Whitaker argues that the repressive reflexes of Arab regimes have been internalized and are repeated at virtually every layer of society. A review by James M. Dorsey 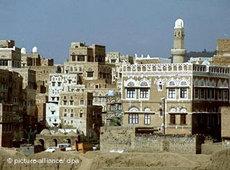 "Far more tedious than the war on terror": according to Brian Whitaker, to create viable alternatives to conservative Islamist thought in societies such as Yemen, a war for hearts and minds needs to truly address what is wrong with the Middle East

​​ The failed Christmas Day bombing of a US airliner and the scramble to prevent Yemen from disintegrating and to defeat Al Qa'eda in the process, has reignited the question, what's wrong with the Middle East? In attempting to answer that question, Western policymakers and analysts have sought since the September 11, 2001 attacks on New York and Washington to identify the roots of Islamic militancy and devise strategies to blunt its deadly edge.

The debate is between two primary schools of thought, one advocating military and law enforcement solutions and one arguing for coupling such solutions with social and economic reform initiatives, but has yet to produce policies that yield results. Yemen and Iraq are cases in point.

How to effect real change?

Yemeni authorities with US assistance neutralized Al Qa'eda in the early part of the last decade only to see it re-emerge again in a perhaps even more deadly form witness a string of attacks that culminated in last month's attempt on a Detroit-bound Northwest airliner.

The Bush administration expected Iraq to emerge from regime change as a model for Arab democracy. What it got instead is more of the same: an Arab government with authoritarian tendencies that has institutionalized corruption and nepotism, a society characterized by tribalism and sectarianism that is inherently discriminatory and restrictive and a rentier economy.

So, the unanswered question remains: what is wrong with the Middle East? In seeking to confront the latest crisis in Yemen and devise strategies that may address Yemen and the Middle East's fundamental problems, western leaders would do well to consult British journalist Brian Whitaker's most recent book entitled: "What's Really Wrong with the Middle East" which would have justified a sub-title like: "And How the West Can Affect Change". 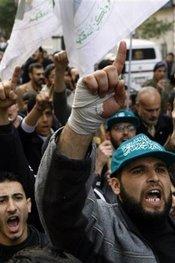 "Resistance to change comes not only from regimes, but also from society itself": protest rally in the Gaza Strip

​​ In a nutshell, Whitaker argues that what makes Arab authoritarianism different from dictatorships in other parts of the world is the fact in the Arab world it is not just about dictatorial regimes superimposed on societies gasping for freedom. Rather it's about regimes that may lack popular support and credibility but whose repressive reflexes have been internalized and are repeated at virtually every layer of society. As a result, resistance to change comes not only from regimes, but also from society itself. And popular resistance is more often than not expressed by Islamist forces.

Take Kuwait for example, where the hereditary emir advocated enhanced rights for women and was confronted by conservative members of the country's elected parliament. This state of affairs leads Whitaker to the conclusion that "governments are the product of the societies they govern and in Arab countries it is often as much as the government itself, which stands in the way of progress."

Consensus based on ritual and coercion

With other words, the 'Arab malaise' that produces jihadis and suicide bombers is one that is perpetuated by ruling elites that at times view miniscule efforts at reform as tools of self-preservation as well as constituent elements of society such as rote education, business and the basic family whose all-powerful male head who sits at the top of a pyramid.

"Egypt has a million Mubaraks": Arab regimes have franchised repression, writes Whitaker, so that society participates in their repression and denial of rights

​​ To describe this phenomenon, Whitaker draws on Palestinian-American historian Hisham Sharabi's theory of neo-patriarichism. In a controversial book published in the 1980s that is still banned in many Arab countries, Sharabi says Arab society is built around the "dominance of the father (patriarch), the centre around which the national as well as the natural family are organized. Thus between ruler and ruled, between father and child, there exist only vertical relations: in both settings the paternal will is absolute will, mediated in both the society and the family by a forced consensus based on ritual and coercion."

That is to say, Arab regimes have franchised repression so that society, the oppressed, participates in their repression and denial of rights. The regime is in effect the father of all fathers at the top of the pyramid. As a result, Egyptian journalist Khaled Diab tells Whitaker, Egypt's problem is not simply an aging president with little to show for himself after almost thirty years in power, but the fact that "Egypt has a million Mubaraks." 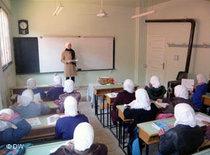 "No tools for innovation": rote learning, conformity and obedience are a major hindrance to reform in the Arab world

​​Neo-patriarchism has produced Arab societies that are stultified societies and lack the tools for innovation; societies in which governments and society itself discourage if not punish innovation, creativity, critical thinking, questioning, problem-solving, and non-conformity. Seen from this perspective, popular support for Islamist opposition to liberal reform adopts a different dimension. So does the effort to combat terrorism and nudge Arab societies towards embracement of equal rights for all. "Change – if it is to be meaningful – must begin in people's heads," Whitaker writes.

To achieve that and create viable alternatives to conservative Islamist thought in societies such as Yemen that create feeding grounds for extremism, a war for hearts and minds needs to truly address what is wrong with the Middle East. It is one that is far more tedious to wage and involves change that only over time will ensure that military and security initiatives – if initially successful rather than serving only to exacerbate problems – produce lasting results.

Women, bloggers and homosexuals, those in the Arab world that experience the most discrimination, rather than reformist politicians and opposition parties, may be the Arab world's foremost allies in this war for hearts and minds. They constitute a key input for Whitaker's book.

​​Equality for women, the largest disadvantaged group, may be the monkey wrench that starts to break down society's repressive mechanisms. Like equality for women, gay rights threaten to undermine gender roles that underwrite male domination. And bloggers in the Arab world are already upsetting the Arab apple cart in which everyone knows their place and refrains from speaking out of turn. The Internet has allowed them to set that rule of Arab society aside and engage in lively, unfettered debate, albeit often at their own peril.

The degree to which Western governments look beyond bolstering Arab regimes and focusing on military and security co-operation, possibly with a thin veneer of democratic reform, may ultimately determine success in efforts to stop Yemen from emerging as the latest hub for Al Qa'eda.

"You can overthrow dictators, you can force countries to have elections and you can even insist on voting procedures that are reasonably fair, but that doesn't bring freedom unless it forms part of a much bigger social transformation," Whitaker says. In writing his book, Whitaker has provided a timely boost to those that advocate a response to terrorism that truly looks at causes and not just effects.

European and American Policy on the Middle East
Inertia More Likely than Change
The victory of the hardliners in Iran and the lack of willingness by the Israeli government to make serious concessions to the Palestinians are setbacks for Obama's vision of peace and security in the region. An essay by Michael Lüders

Perspectives on Radical Islamism
Angry Young Muslims
The political scientist Volker Perthes is the director of the German Institute for International and Security Affairs in Berlin and has published numerous studies on the Near and Middle East. He sees five key ways for Europe to take constructive action in the Muslim world

The EU and Egypt
Stability or Human Rights?
In order not to put its credibility as an international player at risk, the European Union must demonstrate a consistent commitment to human rights in its relations to Egypt, says Isabel Schäfer

END_OF_DOCUMENT_TOKEN_TO_BE_REPLACED
Social media
and networks
Subscribe to our
newsletter