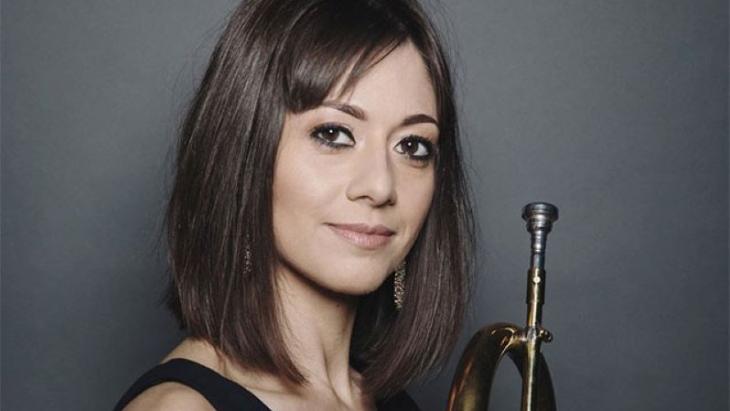 Yazz Ahmed is one of the most exciting personalities on the lively London jazz scene. Her complex musical suites combine the traditions of her Bahraini roots and jazz improvisation. On her new album, she honours outstanding women, including those from the Muslim culture. By Stefan Franzen

"When I was little, I had no idea how few girls played the trumpet," says Yazz Ahmed, who was introduced to the instrument by her grandfather, jazz trumpeter Terry Brown. "It was difficult to find any role models. Today, of course, there are quite a few female colleagues and no longer any such stereotypes. Our male fellow musicians have got used to us. It doesn’t feel strange anymore to be ‘the girl with the trumpet’!"

Nevertheless, there is a great deal that is unusual and surprising about this woman. Ahmed grew up in the Gulf state of Bahrain. When she was nine, she moved to Great Britain, where she began her musical training. Since the release of her debut album in 2011, the London jazz scene is one exciting facet richer, as Ahmed crosses genre boundaries.

She has proven herself as a guest artist with world beat pioneers Transglobal Underground and with the indie rock stars Radiohead and Joan As A Policewoman, as well as surprising classical listeners with her arrangement of Gustav Holst’s "The Planets".

In her own band projects, she makes reference to the heritage of her Arab forefathers. "People in Europe don’t know much about Bahraini culture," she says. "Bahrain has a tradition of pearl fishing. When the divers were away from home and out on the open sea, they would sing of their longing to be back home. This was also a way to motivate each other to work harder. Their songs would be about returning home rich or, just as equally, with empty hands. Bahrain also has traditional songs, women’s drum groups for weddings, and other songs for festivities. The music is very percussive, rhythmical, and the singing sounds like an incantation."

Yazz Ahmed became acquainted with this music when she travelled to her native Bahrain and has incorporated the ambience of these musical roots into her complex compositions. They often possess the character of interwoven suites. In addition to the trumpet, she plays a wonderfully soft, singing flugelhorn, with which she has introduced an innovation. Although the quarter-tone trumpet was invented by the Algerian Bellemou Messaoud in the 1960s, a tradition which was continued by the Lebanese trumpeter Ibrahim Maalouf, Ahmed’s flugelhorn is probably the first such related instrument that can reproduce the typical Arabic interval steps.

"My instrument maker and I tinkered for a long time and the first attempt at a flugelhorn didn’t function at all. He subsequently refined and perfected it, until he finally succeeded. I don’t play the quarter-tone flugelhorn often, but when I do, it is a real joy to create notes that you could never get out of a Western instrument!"

Today, Yazz Ahmed regards herself as a typical child of the London scene – "open, receptive, and keen to experiment" is her own assessment. On her current album "Polyhymnia", the focus moves away from an Arabic toned sound. "The album is named after a Greek muse and means ‘many hymns.’ The pieces are actually songs of praise – hymns to outstanding female figures," explains Ahmed.

She has dedicated her six polished compositions to the Saudi filmmaker Haifaa Al-Mansour ("Wadjda"), Malala Yousafzai, the Pakistani women’s rights activist who survived an assassination attempt by the Taliban, the civil rights activists Ruby Bridges and Rosa Parks, the suffragettes, and the saxophonist Barbara Thompson. "I regard them all as very powerful, inspiring people," says Ahmed. "And it is a real challenge to slip into so many different characters and to try and identify – even partially – with what these women had to go through."

For her supporting line-up, Ahmed chose a big band also made up of women from the London music scene. Together, they produce a courageous, female dramaturgy. The large musical family includes prominent young musicians such as the saxophonist Nubya Garcia and trumpeter Sheila Maurice-Grey from Kokoroko.

As for Ahmed, her performance shines, especially in the solo passages for the flugelhorn. "It is really quite a large group," she admits, "and I think this fact is reflected in the album’s thoroughly hymnal mood. The album has a real 'chunky' feel to it!"

The result is very musically diverse. The piece dedicated to Ruby Bridges, who in 1960 was the first African-American school girl to attend a previously all-white school in New Orleans, begins with a funk groove, which is then confronted with harsh, dissonant tones from the orchestra – a musical reflection of the racist hostilities that Ruby faced on her way to school.

In "One Girl Among Many", Ahmed also makes use of the human voice in order to capture the impressive speeches of Malala Yousafzai in musical tones. "Deeds Not Words", a piece honouring the suffragettes, follows a convoluted path through Arabic scales and jazz harmonies, finally finding its way in a triumphal metamorphosis of "Shoulder To Shoulder", the theme song of the women’s movement at the time.

Her tribute to Rosa Parks makes use of a twelve-tone row, which her big band does not approach as an abstract gimmick, but instead fills with emotional content. And "Lahan Al-Mansour" explores melodies from the Arabian Peninsula in order to portray the courageous filmmaker Haifaa Al-Mansour.

"There are not many women in the Gulf region who are as successful globally and ready to publically express their views," says Yazz Ahmed in her appraisal of the filmmaker. "I don’t even know any other female musicians from Bahrain, and I hope that I can inspire young Bahrainis to find a career in music." Yazz Ahmed is already hinting that her next album will focus exclusively on the traditions of her Arab homeland.

Germany's foreign policy is explicitly values-based. But what happens, Ralf Bosen asks, when democracy, the rule of law and human rights collide with the logic of trade and ... END_OF_DOCUMENT_TOKEN_TO_BE_REPLACED

The rollout of coronavirus vaccines in the Middle East and North Africa is already taking place on a massive scale, with the United Arab Emirates leading the way. Nevertheless, ... END_OF_DOCUMENT_TOKEN_TO_BE_REPLACED

German Middle East analyst Guido Steinberg and television journalist Ulrich Tilgner have both published new books on the conflicts in the Middle East. Their analyses and their ... END_OF_DOCUMENT_TOKEN_TO_BE_REPLACED

Saudi Arabia and its allies have agreed to set aside their differences with Qatar at a summit meeting of the Gulf Cooperation Council. The restoration of diplomatic relations ... END_OF_DOCUMENT_TOKEN_TO_BE_REPLACED

Ten years after the start of the Arabellion in North Africa and the Middle East, many view the movement as a failure. But rather than being over, it has now entered a more mature ... END_OF_DOCUMENT_TOKEN_TO_BE_REPLACED
Author:
Stefan Franzen
Date:
Mail:
Send via mail

END_OF_DOCUMENT_TOKEN_TO_BE_REPLACED
Social media
and networks
Subscribe to our
newsletter