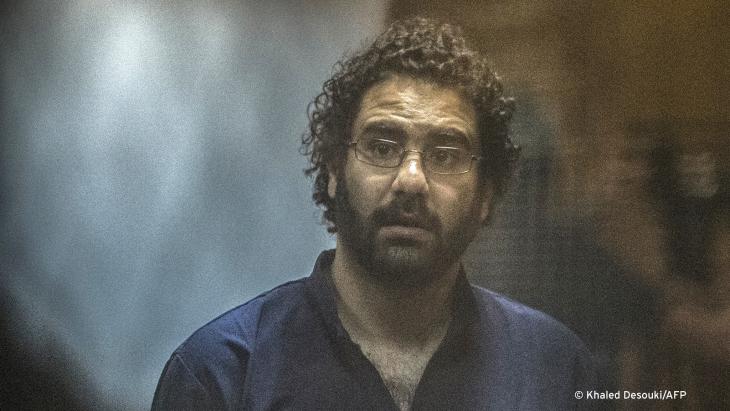 British Prime Minister Rishi Sunak has said he will raise the case of Egyptian-British hunger striker Alaa Abdel Fattah with Egypt's leadership during the COP27 climate summit that opened on Sunday, the same day Abdel Fattah said he would stop drinking water.

Abdel Fattah rose to prominence with Egypt's 2011 uprising, but has been detained for most of the period since. Sentenced most recently in December 2021 to five years on charges of spreading false news, he has been on hunger strike for 219 days against his detention and prison conditions.

In a letter dated 5 November to Abdel Fattah's sister Sanaa Seif, and posted by his family on social media, Sunak wrote that the case remained a priority for the British government and had been raised with Egyptian President Abdul Fattah al-Sisi several times.

"I will continue to stress to President Sisi the importance that we attach to the swift resolution of Alaa's case and an end to his unacceptable treatment," Sunak wrote. "The UK's attendance at COP27 is another opportunity to raise your brother's case with the Egyptian leadership."

Egyptian officials have not responded to Reuters' phone calls for comment on Abdel Fattah's case, but have said previously that he was receiving meals and was moved to a prison with better conditions earlier this year.

Abdel Fattah's family said he was only consuming minimal calories and some fibre to sustain himself earlier in the year. After family visits in October his sister, Sanaa Seif said: "He looks very weak, he's fading away slowly, he looks like a skeleton."

Abdel Fattah's family said he had told them he would stop consuming honey, tea and milk on 1 November and planned to cease drinking water from Sunday.

"I consider lights on around 10 am as a signal of a new day," he wrote in his most recent letter to his family. "With the turning on of the lights on Sunday November 6, I'll drink my last cup of water ... anything after that is unknown."

Egyptian authorities had to act within three days to save Abdel Fattah, the head of Amnesty International, Agnes Callamard, told a press conference in Cairo.

END_OF_DOCUMENT_TOKEN_TO_BE_REPLACED
Social media
and networks
Subscribe to our
newsletter