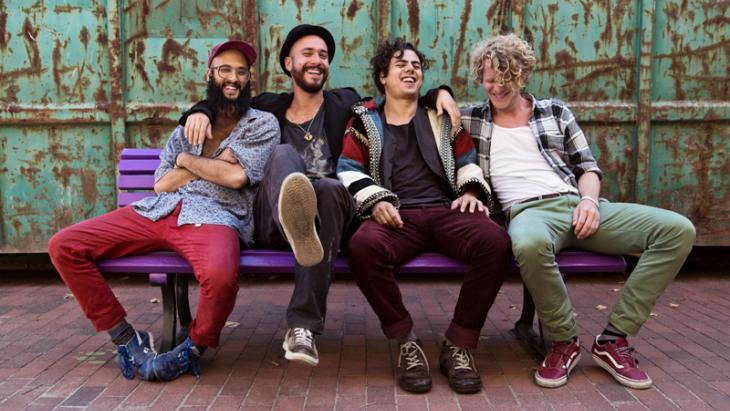 Bukahara are a band living the dream – from street buskers to recording artists. The world music combo has just released their second CD "Strange Delight", which they produced themselves. Ceyda Nurtsch asked the musicians about the secret of their success

Things could hardly be better at the moment for Bukahara′s band members: the last few weeks have seen appearances on various radio stations and on television, all culminating in a sell-out concert in Cologne and a fantastic CD release party. Until recently they were playing at private parties in apartments and busking on the streets, so what's the secret behind the meteoric rise of the four musicians?

There is a brief look of bewilderment in the eyes of the two Bukahara musicians, Ahmed and Avi, as they peer respectively over their baguette and croissant in a cafe in Berlin's Neukolln district. My question about the secret of their success appears to have perplexed them, as if they'd never given it a moment's thought. It feels a bit like asking someone to explain how to ride a bike. Jump on and pedal. Yes. But that doesn't explain why one remains upright instead of falling over.

Ahmed's eyes search the cafe imploringly, as if somehow hoping to find the answer there. He seems at a loss, "It all just happens somehow." They seem a likeable pair – as they tuck into breakfast at three in the afternoon – and engagingly modest.

Avi and Ahmed are the Berlin section of Bukahara, a band formed in 2009. The bearded Ahmed, with his hipster glasses and cap, looks a bit like a Berlin retro version of Bobby McFerrin. Avi, who usually wears a hat on stage, is bald in real life, and somehow looks a bit taller close up. Ahmed laughs a lot and loudly. Avi, too, likes to laugh – just quieter, more shyly. The other half of the band, Soufian and Max, live in Cologne.

The four creative musicians met during their studies at Cologne′s music conservatory. Not in the classroom as it happens, but outside when they went for a smoke. Afterwards, they got together regularly to make music – often the whole night through. There was a lot of celebrating and a lot of drinking. They played at parties, in bars and studios. They travelled all through Europe, busking barefoot on the streets. Small appearances at festivals followed, then larger appearances and soon they were able to set up their own website, appeal for crowdfunding and release two CDs. It wasn't long before they attracted the attention of the media.

"We're into exotic and experimental music"

It's an incredible success story – all the more so since the four barely ever rehearse together. "The more we play together, the more our music evolves," Ahmed explains. And actually, they play together all the time: busking, in the tour bus, or at night in pub jam sessions. Sometimes they focus on each other, and it is more introverted, with more improvisation, and sometimes they orientate themselves downstage, more directly to the audience. "We're into exotic and experimental music," explains Avi. So there is always improvisation, he says, it's what their music is about.

"The fact that we play music together wasn't a deliberate decision, not even a musical one," says Ahmed. "We′re just good friends." A Palestinian and a Jew playing music together – no shortage of potentially cliched questions there then. Nothing, explains Ahmed laughing, could have been further from their minds than the idea of bringing together the cultures and languages of the world into a musical project aimed at saving the world. "We are not a peace project. We just make music."

It is this relaxed and playful approach to their music that woos audiences. It is a pleasure and a privilege to listen to four such accomplished musicians, playing so skilfully and harmoniously together. Bukahara's music is feel-good; it has a lightness of touch that allows them to weave klezmer melodies and ska rhythms seamlessly together into a new sound that is very much the band's own. The result is music that appeals as much to fans of global sounds as it does to jazz lovers, connoisseurs of well-arranged brass music, or those more inclined towards the raw melancholy of singer-songwriters.

The four musicians also bring their own personal touch and distinctive colour to the music. Avi has Jewish roots. The son of a musical family, he grew up in the Swiss city of Zug. After taking up the violin at six years old, he quickly learned to play by ear. Whenever the group's music is tinged by klezmer, reggae or gypsy, it′s usually thanks to his influence. Soufian's deeper, rougher sounding vocals belong more in the singer-songwriter tradition, while Max is the one who likes to jazz things up. Ahmed is from Ramallah and came to Germany when he was nineteen to study double bass. Early on, he realised that "the classical music scene, the hierarchy of the orchestra just isn't my thing." He prefers the rhythmic, improvised melodies of oriental music that he grew up with and that he tries to blend with jazz.

The musicians are continuously pushing themselves, trying out new things. "I like to experiment with a new instrument every few months", says Ahmed. He plays piano, Arab hand drum and various Arab stringed instruments. Avi plays violin, piano and saxophone. And at the moment, he says, never goes anywhere without a mandolin.

Music critics tend to place Bukahara's music somewhere between the sounds of the Balkans and reggae. For Avi, however, "music genres are complete crap," just pointless pigeon-holing. He prefers it when people just listen to their music.

The four have managed to successfully negotiate the obstacles and dodgy contracts of the neoliberal music business by producing their own CD. An internet appeal for crowdfunding brought 10,000 euros, with which they could shut themselves away in a studio for a year to record and produce "Strange Delight": eleven songs in English, German and Arabic, songs about longing, about feelings, about life. The album is also available on vinyl and can be ordered from their website.

The name Bukahara is every bit as enigmatic as the question of why it is that some groups achieve a high level of popularity, and the ability to live from their music, and others not. The word may conjure images of anything from a type of food to a Sahara beetle. But such questions don't matter. Bukahara is a longing for faraway places, for travel, for the exotic. And a Bukahara concert? That means, quite simply, an evening of pure pleasure.

In "Sprache und Sein" (Language and Being) the activist Kubra Gumusay critically examines the function of language – the narratives that reflect and determine the realities of ... END_OF_DOCUMENT_TOKEN_TO_BE_REPLACED

Award-winning Indian author Rahman Abbas spent time in Europe last year researching "the Holocaust and the future of minorities in India and Pakistan". To mark VE Day on 8 May, he ... END_OF_DOCUMENT_TOKEN_TO_BE_REPLACED

A muezzin call to prayer via loudspeaker is legally permissible in principle, but various basic rights and interests must be considered, explains professor of law Mathias Rohe in ... END_OF_DOCUMENT_TOKEN_TO_BE_REPLACED

Repression and despotism takes many forms. Yet as varied as these phenomena are, they all share a common core, argues Tarek Azizeh. Revolutions accompanying the struggle for ... END_OF_DOCUMENT_TOKEN_TO_BE_REPLACED

For the first time anywhere, Syrian intelligence officers are facing trial – in Germany. The court aims to probe the defendant's alleged crimes, as well as cast light on Bashar al ... END_OF_DOCUMENT_TOKEN_TO_BE_REPLACED

The refugee crisis on Turkey's borders can only be resolved with a new EU deal. It should build on the current plan, but avoid its flaws, writes Ozgur Unluhisarcikli of the German ... END_OF_DOCUMENT_TOKEN_TO_BE_REPLACED
Author:
Ceyda Nurtsch
Date:
Mail:
Send via mail

END_OF_DOCUMENT_TOKEN_TO_BE_REPLACED
Social media
and networks
Subscribe to our
newsletter