Trying for an International Image

The Arab world's largest book fair, which closed on 4 February, was offering books to the public at reduced prices. This year the featured country was Italy. Mona Naggar reports 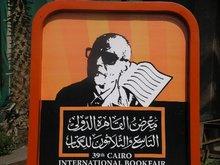 ​​For the last two years the international book fair in Cairo has been undergoing a period of re-orientation. The fair, which is the largest book fair in the Arab world, has been trying to make itself more attractive to Western publishers and give itself a more international image.

This is most evident in the accompanying programme of events. In the past the organisers invited Arab literary stars like Mahmoud Darwish or Adonis to take part, now they are trying to win big non-Arab names. This year the Turkish Nobel laureate Orhan Pamuk spent two days in Cairo.

The importance of Europe

The idea of featuring the works of a foreign country as guest of honour – this year was the second time this had been done – also gives the fair an international flair.

According to Wahid Abdalmagid, deputy director of the book fair, in the next few years the guests of honour will be exclusively European countries, since the organisers regard the dialogue with the West as a first priority. They believe that the tensions which exist between the Arab-Muslim world and the West are mainly due to lack of knowledge of each other.

The fair with its hundreds of thousands of visitors from every class of society, they say, is the ideal environment for fighting prejudice.

This year's guest of honour is Italy, which is bringing not only music, theatre and cinema but also the classic topics of cultural dialogue: the role of the media, the role of oriental studies and the co-existence of Islam and Christianity. The Italian guest appearance has also left something permanent behind: a Mediterranean book prize for publishers, translators and writers from the countries on the northern and southern coasts of the Mediterranean.

No more politics at the expense of culture

At this year's fair, the Italian-Egyptian jury awarded prizes to publications which will make a contribution to mutual understanding.

Part and parcel every bookfair - lectures and panel discussions

​​The book fair's accompanying programme was met with sharp criticism in the Arabic and Egyptian media, as it largely avoided political issues. In the past, programmes always featured the Arab world's favourite topics, like democratisation and the Islamist movements, but this year they were nowhere to be found.

Abdalmagid explains this by saying that the organisers wanted to devote the fair this year entirely to cultural issues. There was enough discussion of political topics outside the fair, he added.

"In the last few years we never had a single event about publishing or translation," he says, "while we had endless panel discussions with representatives of various political movements. That was all at the expense of the culture. But we, like all the other book fairs in the world, must finally come back to dealing mainly with the Book!"

That may sound convincing, but the subject of nuclear power did come up at this year's book fair, and for the last few months there have been voices in Egyptian government circles which have been calling for a resumption of Egypt's nuclear programme. So the book fair still remains a seismograph of the priorities of the Egyptian ruling class. 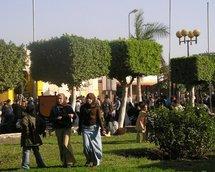 ​​Although the new director, Nasir al Ansari, has directed the book fair towards the West, it's clear that the inter-Arab and inter-Muslim dialogue should not be neglected. That such dialogue is necessary was evident from the anti-Shiite polemics which were being sold in several of the halls.

All the same, Wahid Abdalmagid made it quite clear that it was unimaginable that Iran or another Islamic country would be guest of honour in the foreseeable future.

Not much has changed for the Arab publishers under the new director. They are still met with the same random censorship when they try to bring their books into the country. Books which are available on the Egyptian market will be stopped by customs for no clear reason.

This year it affected books by Milan Kundera, Michel Foucault and the young Lebanese writer Samir Abu Hawwash. The boxes with their books in them disappear into the labyrinthine Egyptian customs authorities.

The Cairo book fair is also a challenge for Western publishers. This year there was a catalogue of participating publishers, but it was only in Arabic.

Cairo International Book Fair
Reforms and Censorship
This year's International Book Fair in Cairo, which runs from 26 January to February 8, has chosen as its motto "The Impact of the Arab Renaissance and Opportunities for Reforms." Some 610 publishers from 25 countries are taking part in this sales showcase. Mona Naggar reports from Cairo

END_OF_DOCUMENT_TOKEN_TO_BE_REPLACED
Social media
and networks
Subscribe to our
newsletter