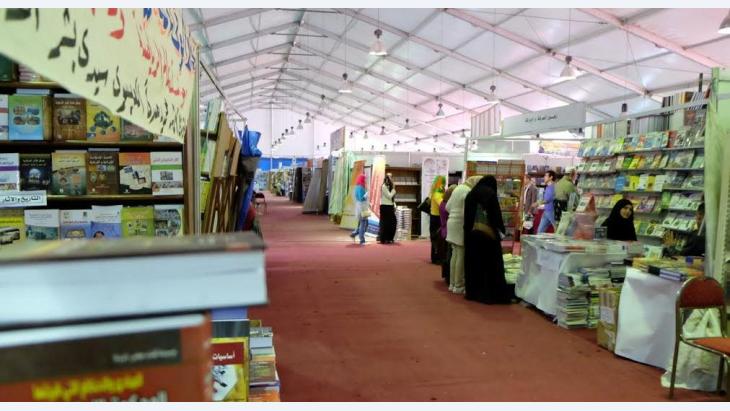 Many Egyptians are avoiding this year's Cairo International Book Fair for fear of new outbreaks of violence or terrorist attacks. Publishers are complaining about intolerable conditions and a lack of planning. By Amira El Ahl in Cairo

What, one asks, do pretzels have to do with books? Well, the pretzel has served as the symbol of the baking trade in Germany since the early fourteenth century. A mere century later, Johannes Gutenberg invented the modern printing press. Shortly afterwards, the Frankfurt Book Fair was launched.

This unexpected historical detour was made by Ramesh de Silva, first secretary and director of the culture and education section of the German Embassy in Cairo, when he opened the German stand at this year's Cairo International Book Fair.

It has become a tradition for the German stand to open with a pretzel reception. In this way, visitors to the stand not only get information on and books from Germany, they also get to sample German cuisine. Thanks to Ramesh de Silva, they also learned a little about German history into the bargain.

For decades now, there has been a German stand at the Cairo Book Fair. Organisations represented at the stand include the Frankfurt Book Fair, the Goethe Institute, the German Information Centre at the German Embassy and Egyptian bookshops that stock German literary works for the local market. This year, a total of 350 titles from 150 publishing houses were presented at the German stand. They include new literary publications from 2013, the latest books for children and young people, and even graphic novels from Germany. 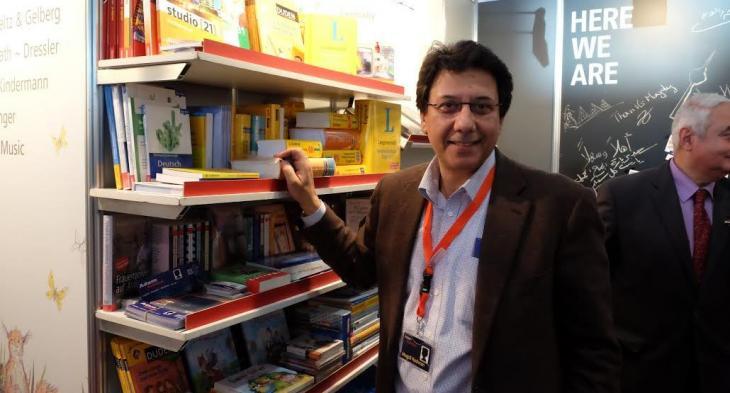 Publisher Magdi Radwan usually rents his own stand at the Cairo International Book Fair. This year, however, was different: the costs are too high and the return to low. Instead, he just co-operated with the German stand

For the past seven years, the Adam bookshop has been represented at the German stand. Magdi Radwan stocks German works for the local market, as well as works by Arab authors translated into German.

In previous years, he always maintained his own, separate stand in addition to his participation at the German stand. This year, he decided against his own stand; it is simply no longer profitable. It costs him 25,000 Egyptian pounds to rent a stand for the two weeks of the book fair. On top of this, there are the additional expenses of staff and electricity, etc. "Now is not the time to be squandering money; you have to think twice before spending anything," says Radwan.

Furthermore, shortly before the outbreak of the revolution in January 2011, the exhibition halls were torn down. There were plans for larger and more modern grounds with new exhibition halls and accompanying hotels, but nothing came of them. Except for one, all the halls were torn down. Since then, the publishers and their stands have had to make do with being housed in large marquees. "When there are halls, I will rent a stand again," says the bookseller.

Radwan and other publishers all agree that the organisation of the book fair was considerably better this year than last. Nevertheless, the present situation is untenable in the long run. "They are trying, but they still do not have a plan," says Radwan.

The empty halls of Nasr City

The political turbulence of the past three years has also left its mark on the Cairo International Book Fair, which is located in the district of Nasr City. It has also affected the publishing business. The terrorist attacks in Cairo on the first weekend of the book fair, which coincided with the anniversary of the 25 January revolution, led to a dramatic drop in the number of visitors.

"We can say with some certainty that this year's turnover will be down 30 per cent on last year's," says Mustafa El-Faramawi, director of purchasing for the Shorouk Book Shop, one of the largest in Egypt. "And the drop in sales compared with 2010 is more than 60 per cent." 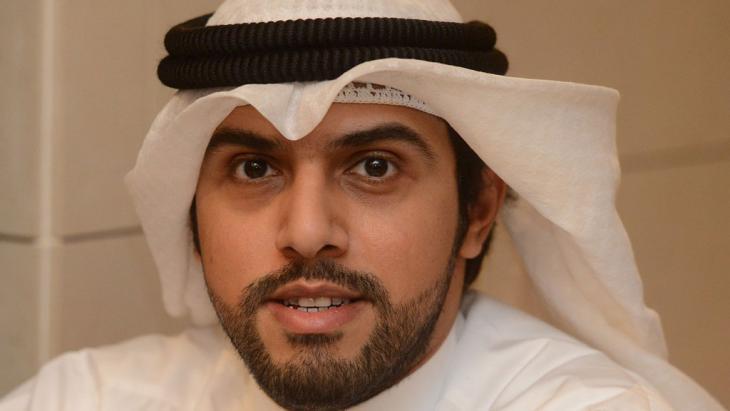 Kuwaiti best-selling author Saud Al Sanousi is popular with readers in Egypt and won the International Prize for Arabic Fiction in 2013. His native country was the featured guest country at this year's Cairo International Book Fair. To the disappointment of many, however, Al Sanousi did not attend

However, it is not only the visitors that have stayed away from this year's book fair. Even some Egyptian publishers, including established names such as Shorouk International and a number of publishers of children's books, have decided not to take part in the fair. In addition, many book dealers from Saudi Arabia, Jordan and Lebanon are missing this year.

In Hall 19, where there is usually a tussle for every centimetre of exhibition space, many stands remain empty. Kuwait, the fair's featured guest country, did not even send its best-known author to the book fair: Saud Al Sanousi won last year's Arab Booker Prize, and his book, "The Bamboo Stalk", is a bestseller in Egypt.

"Kuwait is the guest country and it has such an attractive author, and yet the country is altogether invisible here," says Sherif Bakr. The 38-year-old publisher has been working in his father's family business since 1997. In 2005, he took over the Al-Arabi publishing house. This year, he caused something of a sensation with the publication of new translations of the work of Franz Kafka.

In the past, the Cairo International Book Fair has been a popular destination for families with children, as the exposition has traditionally taken place during the school holidays. "The crowds were enormous during the first two days of the event," says Sherif Bakr. "People wanted to shop and spent money freely." Then came 24 January and the terrorist attacks in Cairo. There was a great fear that the book fair could be a target of attack, which meant that many visitors stayed away.

"Together with the GEBO (General Egyptian Book Organisation), we publishers started a campaign on Facebook to show people that the book fair is safe," explains Bakr. The doors of the exhibition remained open, and the entrance price was lowered from ten to one Egyptian pound in order to attract the public. "It was important that we continued, despite the situation. We want to encourage readers to attend the exhibition."

In spite of the massive drop in revenue in recent years, the Cairo International Book Fair remains the largest such exhibition in the Arab world and in the Middle East. From its opening day to its conclusion, the book fair is a retail exhibition. "Selling books at the book fair is a matter of survival for many Egyptian publishers," says Magdi Radwan. According to Sherif Bakr, many publishers make up to 80 per cent of their annual sales at the book fair. 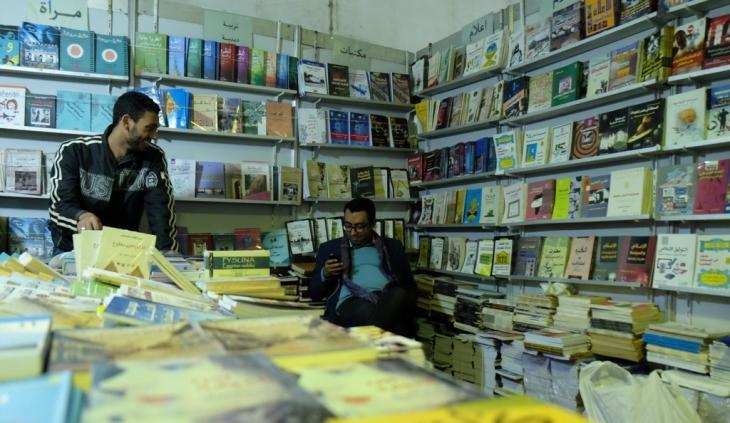 Publishers in Egypt are now focusing on young readers: in particular, those between the ages of 15 and 30 are important for the market, writes Amira El Ahl

In the shadow of the Arab Spring

The upheavals in the Arab world over the past three years have significantly altered the market as well. "It has become much more difficult to travel to other Arab countries. As a result, there is a greater focus on local markets," says Sherif Bakr.

State institutions, such as libraries and universities, no longer have any funds and therefore are not buying any new books. "Instead, we now have more bookshops and also more readers in Egypt," says the publisher.

In particular, readers between the ages of 15 and 30 are important for the market, and publishers are concentrating their efforts on reaching this market segment. Sherif Bakr tells of a colleague who came up with a harebrained idea to reach these readers: "He published a book of poems by completely unknown young authors."

Harebrained or not, the idea proved to be inspired. Although these young authors were unknown, they had a huge fan community on Facebook. "One of them had 117,000 friends on Facebook." Hundreds of young people showed up for a reading at the book fair to have their books signed. "The first edition of the book has completely sold out," says Sherif Bakr. This is quite uncommon for the Arab market.

The market is changing; readers are younger and more mobile. This has led to a new initiative that is just now being launched in Egypt and could completely change the market – a portal for e-books in Arabic.

"This is the next big thing," says Sherif Bakr. He wants to be a part of it with his books right from the very start. Once it is up and running, people from all over the world will be able to download and read Arab books on their e-book readers.

Palme d’Or winner "Boy from Heaven" is a classic crossover film in which cultural elements are mixed together in haphazard and random fashion. Shady Lewis Botros bemoans the ... END_OF_DOCUMENT_TOKEN_TO_BE_REPLACED

In Doha, Arabs from Morocco, Tunisia, Egypt and Algeria are gathering to celebrate the first ever FIFA World Cup to be held on Arab soil. The criticism from Europe? Over the top, ... END_OF_DOCUMENT_TOKEN_TO_BE_REPLACED

November 2022 sees the Arab world firmly in the spotlight with the COP27 in Egypt and the FIFA World Cup in Qatar. Public trust in MENA governments is weak, thanks to their ... END_OF_DOCUMENT_TOKEN_TO_BE_REPLACED

COP27 in Sharm el-Sheikh is turning into a PR disaster for Egypt’s military regime. Instead of praise for the host, the news is full of solidarity for imprisoned activist Alaa ... END_OF_DOCUMENT_TOKEN_TO_BE_REPLACED

END_OF_DOCUMENT_TOKEN_TO_BE_REPLACED
Social media
and networks
Subscribe to our
newsletter