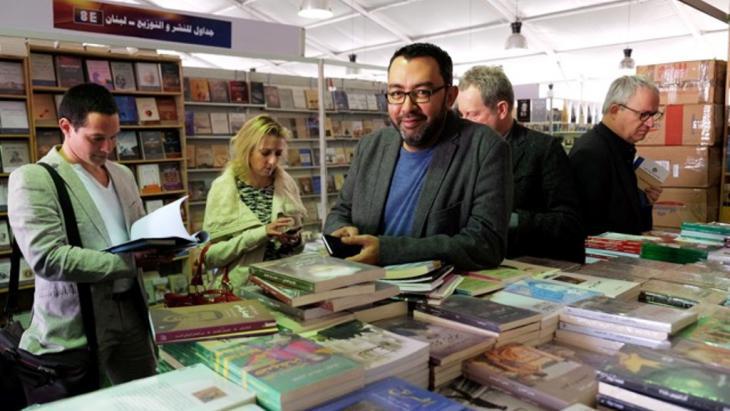 70 million books, 47 participating countries, 850 publishers ... and all for an admission price of just under ten cents. After 46 years, the Cairo International Book Fair is not only the oldest in the Arab world; with one million visitors, it is also the second largest book fair on the planet. By Amira El Ahl in Cairo

Unlike most of the world's major book fairs, the one in Cairo also sells to the public from the first day it opens its doors. In the halls and tents on the grounds of the trade fair, publishers pile up boxes of books that they hope to sell over the course of the 16 days of the fair. In fact, some of the publishers make up to 80 per cent of their annual turnover here.

At the same time, the fair is an important hub for publishers in the Arab world. "You can find customers here and meet publishers, translators and authors," says Khalid Al-Maaly, owner of the Al-Kamel publishing house, which has a large stand at the fair. However, making sense of the chaos playing out in the many halls and tents and knowing which contacts to seek out can be a challenge for foreign publishers, to say the least.

"Publishers across the globe can't wait to corner the Arabic market," says Egyptian publisher Sherif Bakr. "But it's like Pandora's Box for them; they can't decode this world on their own." This is due both to the language barrier and to a culture that is sometimes hard for outsiders to comprehend. 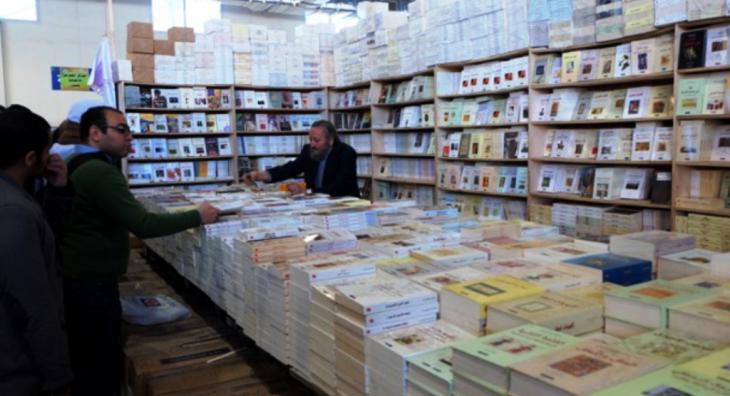 Publisher Khalid Al-Maaly at the trade fair stand of the publishing house Al-Kamel. "Making sense of the chaos playing out in the many halls and tents and knowing which contacts to seek out can be a challenge for foreign publishers, to say the least," writes Amira El Ahl

The birth of an idea

The 39-year-old publisher, who began working in his father's business in 1997 and took over the Al-Arabi publishing house in 2005, wants to change all that. "I know both sides and am able to mediate between them." For the past year, Sherif Bakr has been a board member of the Egyptian Publishers' Association and he has decided to use this new position and his expertise to make the book fair more interesting for foreign publishers.

Together with the GEBO (General Egyptian Book Organisation), he initiated "Cairo Calling", a programme designed to help foreign publishers find the right contacts at the Cairo International Book Fair and to bring the two sides together. "We do all the hard work involved," says Bakr.

Sherif Bakr printed a brochure advertising his services and distributed it at the book fairs in Frankfurt and Sharjah. The initial response was very positive: "We encountered a lot of interest throughout the world," says Bakr. In the end, three French publishers, two representatives of the Dutch Literary Foundation and Tobias Voss, managing director of international markets for the Frankfurt Book Fair, came to Cairo.

The participants in "Cairo Calling" were given a professional introduction to the Cairo International Book Fair that lasted three days. "The programme is a wonderful idea," says Tobias Voss. "If you can't read Arabic, it is almost impossible to know which publishers to focus on." Emanuelle Collas from the French publishing house Galaade Édition agrees: "Finding my way alone here would be simply impossible." 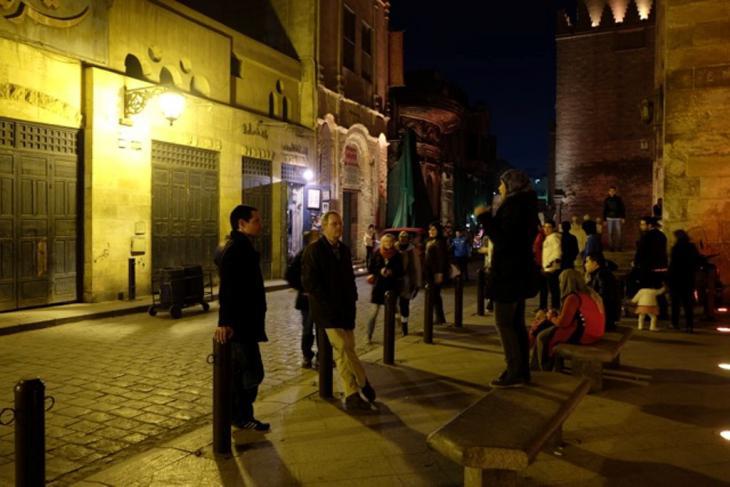 The "Cairo Calling" programme wasn't all books: participants were also given a taste of the real Cairo with a belly dance evening, an authentic Egyptian dinner, a trip to the pyramids and a walking tour of old Cairo (pictured here)

On the first day, the small group led by Sherif Bakr sets off late in the morning. Starting in Hall 19, where most of the book publishers are foreign, the tour continues, moving from tent to tent across the vast exhibition grounds. Bakr deliberately heads for the stands of publishers who specialise in translations from abroad. This, after all, is what the participants are interested in: both making contact with publishers who would like Arabic translations of works by foreign authors from their ranges, and also discovering interesting authors to add to their European catalogues.

By noon, the group has visited about 15 stands, talked to publishers and made appointments for meetings. By the evening, the visitors have visited many more stands, and their calendars for the next two days are full of business meetings. On days two and three, they will continue their brief talks with their Arab colleagues with the help of interpreters in order to find out whether it will be possible to do business together. 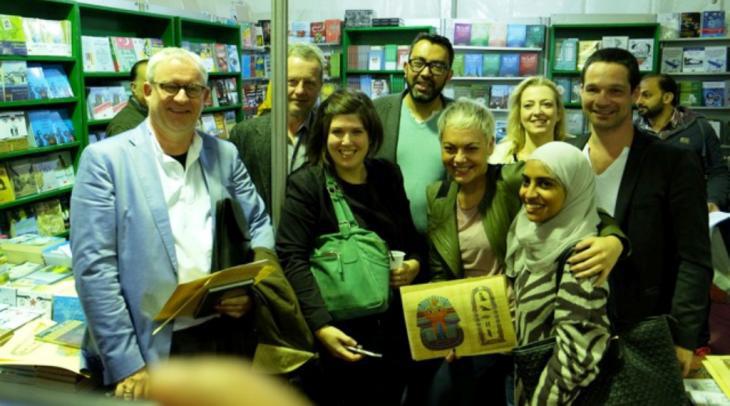 One last photo: on the final day of his "Cairo Calling" programme, Sherif Bakr organised a small reception for his visitors at the stand of his publishing house Al-Arabi

"We took the time to discuss various issues," says Emanuelle Collas on the last evening of her visit. "The three days were very productive and gave me lots of new ideas." Four publishers expressed interest in a book she has published in French. She is very satisfied with the outcome.

Even though she knows the region and already had a few contacts, "Cairo Calling" was still a big help for her: "In the last five years, a lot has happened in Egypt in particular; there are many new publishers and new authors, and my three days here brought plenty of surprises."

Getting to know her colleagues from Holland and Germany was also very interesting. "We hadn't met before, but we ended up holding some joint meetings, which was very stimulating." She is definitely planning to come back next year. "The next step is to stay in touch and see where these new contacts will lead."

Sherif Bakr knows how important it is to find the right person to do business with. "We offer the participants our knowledge of the Arabic book market", he says, "and knowing the right people means being able to do business."

Yet "Cairo Calling" is meant to be more than just a contact service. "After the book fair and the meetings are over, we want the participants to get a taste of the real Cairo." To this end, he organised activities including a belly dance evening and an original Egyptian dinner at Sumaya's restaurant in the city centre, which is considered an insider tip even among locals. The pyramids were, of course, also part of the programme, as was an evening tour of old Cairo, where Nobel Prize laureate Naguib Mahfouz grew up and which served as a lifelong inspiration for his stories.

Political analyst Taqadum al-Khatib argues that Egypt can, in co-ordination with its European partners, develop a common vision to solve the complex conflict in Libya. For this to ... END_OF_DOCUMENT_TOKEN_TO_BE_REPLACED

The upheavals of the past year in the MENA region are arguably as momentous as those of the Arab Spring in 2011. Yet perhaps the biggest difference is that our interest seems to ... END_OF_DOCUMENT_TOKEN_TO_BE_REPLACED

In 2019, the long-running Penguin Classics series released its first novel translated from Arabic: Tawfiq al-Hakim’s "Return of the Spirit", conveyed into English by William ... END_OF_DOCUMENT_TOKEN_TO_BE_REPLACED

Equality in divorce, a ban on polygamy: reformers of Islamic family law have a clear agenda. They are exploiting the ambiguity of traditional jurisprudence. By Joseph Croitoru END_OF_DOCUMENT_TOKEN_TO_BE_REPLACED