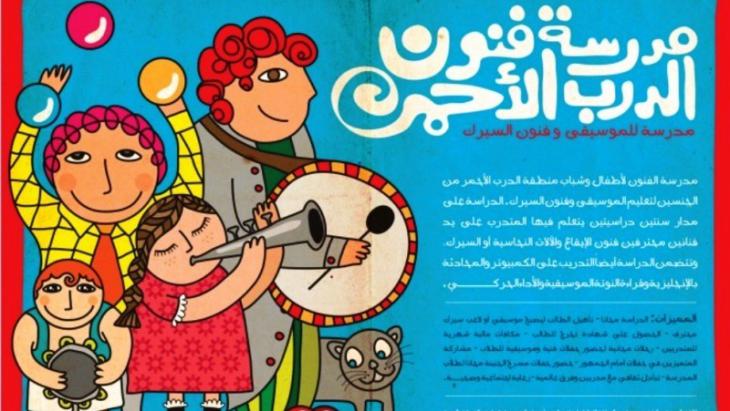 The chance of a lifetime

In early 2017, Cairo's Al Darb Al Ahmar Art School moved into new premises. Adjacent to the perimeter wall of the city's Azhar Park, the new building is also right next to the Genaina Theatre, venue for most of the school's performances. Islam Anwar has the details

Those wishing to visit the school′s new location must negotiate a maze of narrow streets and alleyways, passing dozens of small production plants and workshops that are dependent on child labour. Yet, on arrival, the visitor is greeted by a very different scene. Passing through the entrance gate, one enters a large courtyard full of happy children busily absorbed in mastering the arts of the circus. From the rooms of the surrounding building, the sounds of various musical and percussion instruments echo around the courtyard.

The school for circus arts and music opened in 2011. It offers the children an alternative to the kind of work available in the neighbourhood, work that otherwise would inevitably rob them of their childhood. And with so many of its graduates having gone on to work as trainers in other schools or to start up art or music groups of their own, the school's popularity speaks for itself.

Winning people over to the idea was difficult at first, as school director Khawla Abu Saada recalls. "In the early days many parents were against sending their children to us. However, we staged street performances around the local neighbourhood; the students learned quickly and were successful. So people soon began to change their minds about what we were doing.″

All activities at the Al Darb Al Ahmar Art School are free and run under the auspices of the "El-Genaina Company for Arts and Culture Services" partnered by the "Aga Khan Music Initiative". The children, aged between 8 and 16, have a choice of two main specialisations: performing arts – that is circus arts, dance and drama – or music.

Students learn how to play percussion instruments, such as drums and tambourines, brass instruments, such as saxophones and trumpets, as well as the accordions The school also offers English lessons and employs its own social worker and a doctor to look after the children's health.

Training lasts two years, with attendance at the school required five days a week. In addition students get the chance to participate in festivals, both at home and abroad. The school has also created several performance pieces of its own in recent years, combining circus, music and drama, including such productions as "Zambalek", "Balalaika" and "Lost and Found".

The school's administrators attach great importance to sustaining and supporting students' further development, with academic and professional assistance made available to them in the form of scholarships. The "Al Darb Al Ahmar Art School" also provides monthly grants to students who go on to study at a university or technical college to help ensure they can complete their studies and graduate. In addition, there is financial assistance to help with the purchase of any musical instruments or circus equipment required after qualification.

Director Khawla Abu Saada believes that the success of the students who attend training sessions regularly has been an important factor in convincing families to allow their children to enrol at the school. "Most of the children who have completed their studies at the school are now active in various artistic contexts. Many go on to enrol in arts faculties or institutes, such as the Arabian Music Institute, or at colleges of art, music or sport," she says.

Dreaming of the circus

Four years ago, the then eight-year-old Saif Safwat came to the Al Darb Al Ahmar Art School with his mother and older brother. Thrilled to discover this new world, he enrolled and began learning the arts of the circus.

He found he had a special talent for acrobatics. "I loved it from the very first day I arrived; the trainers treat us with love and respect and we learn something new every day. We also get the chance to travel, to perform in different cities", enthuses Saif. Along with his passion for the circus, he dreams of going to medical school and is currently attending a preparatory course. His ambition is to work as a doctor at the Al Darb Al Ahmar Art School.

When Anji saw the circus and music performances in the streets of the Al Darb Al Ahmar district, she too was keen to enrol. Her mother supported her in her ambition and Anji passed the entrance exam at the second attempt. Thirteen-year-old Anji studied performing arts for three years. When that ended, she decided she wanted to stay on at the school, so began to learn music.

It's the joy on the face of her mother or her friends and neighbours, during performances in the streets or at the Genaina Theatre that gives Anji the biggest thrill. It's all the motivation she needs: "When I began at the school, I wanted to learn circus arts and music. I am really happy I've been able to fulfil my dream. Now I have completed my studies in performing arts, I am studying music."

The 18-year old Ahmed Khalil is one of the oldest students at Al Darb Al Ahmar Art School. He studied performing arts for four years, then worked as a professional circus artist after completing his studies. He would now like to learn to play the saxophone alongside his studies at the sport faculty. Initially, he says, his family was against him going to the school, but he insisted and eventually got his way. "I am successful in my work and am able to pay my way. When television and other media carry reports about the school, I see the esteem in which it is held. These days my family is very proud of me."

"The Al Darb Al Ahmar Art School has changed my life," he continues. "Before I went there, I was just a labourer, now I am an artist. The school has taught me so many things about culture, about the importance of art, reading and healthy eating. I learned how important it is to support each other, how to develop my potential and the importance of passing on experience and talent to the younger generation."

Over the past five years, Al Darb Al Ahmar Art School has participated in dozens of festivals and events both within and beyond Egypt. Khawla Abu Saada believes that such opportunities are the best way for students to get to know other groups and to find out what professional life in the circus, music and theatre is all about.

Political analyst Taqadum al-Khatib argues that Egypt can, in co-ordination with its European partners, develop a common vision to solve the complex conflict in Libya. For this to ... END_OF_DOCUMENT_TOKEN_TO_BE_REPLACED

The upheavals of the past year in the MENA region are arguably as momentous as those of the Arab Spring in 2011. Yet perhaps the biggest difference is that our interest seems to ... END_OF_DOCUMENT_TOKEN_TO_BE_REPLACED

In 2019, the long-running Penguin Classics series released its first novel translated from Arabic: Tawfiq al-Hakim’s "Return of the Spirit", conveyed into English by William ... END_OF_DOCUMENT_TOKEN_TO_BE_REPLACED

Equality in divorce, a ban on polygamy: reformers of Islamic family law have a clear agenda. They are exploiting the ambiguity of traditional jurisprudence. By Joseph Croitoru END_OF_DOCUMENT_TOKEN_TO_BE_REPLACED