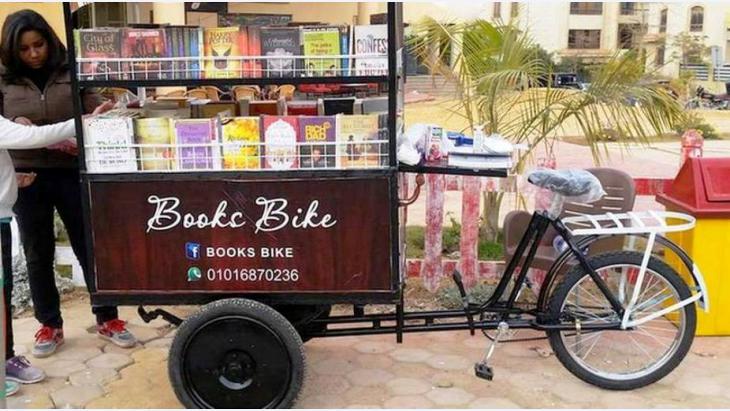 Bringing books to the people

A cargo of books and a smart tricycle fitted with bookshelves: with these simple means, Hadeer Mansour und Mohammad launched their project – a small mobile library that travels through the neighbourhoods of the Egyptian capital Cairo. By Islam Anwar

27-year-old Hadeer used to work at an Egyptian book industry company in marketing and sales. In this capacity, she organised many book fairs at universities, schools and cultural establishments. But a few months ago, she decided to set up her own project – and her boyfriend Mohammad came up with the concept for it: a book bike on the streets of Cairo.

"I thought that this is a new, innovative idea, which also makes it easier to transport books from one place to another – and it's environmentally friendly. So we began with the realisation: a specialist cycle dealer built our bike, which has to be really robust to carry the weight of the books and withstand the rough road conditions in the Egyptian capital. It also needs rain protection for the books. And finally, it should also look cool," says Hadeer.

The "book bike" offers dozens of books of various genres, from literature, history and philosophy right through to translations and children's books. Hadeer profited here from her experience in the sales and marketing of books. This made it easy for her to communicate with publishers. She knew the titles that would sell well and how to get hold of them. It was at this point in the project that Hadeer realised that "the project would not be limited to the selling of books from the book bike: the bike has a Facebook page with 5,000 followers. Through this page we distribute information about books, new editions and writers. We also offer to deliver books to your door," she says. 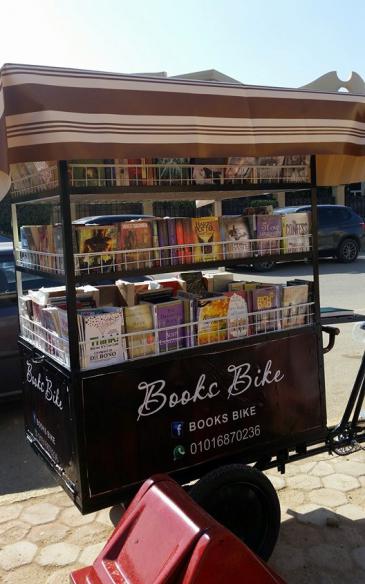 On the road: Hadeer dreams of extending the idea to other regions, so that the business can eventually be present across the entire country. The goal is that there will be at least one book bike in every governorate, encouraging people to read and buy books

Hadeer believes that selling books does not follow the profit logic alone, but that it primarily passes knowledge on to society: "When you sell a book, you're passing on another experience: new information travels from one person to the next – quite apart from the sheer pleasure of reading. At bottom I′m basically a reader and a book lover. Selling books comes a close second though. Despite all the adversity, this works fills me with enthusiasm. After all, I'm convinced that books can change people for the positive."

Although the project enjoys little financial support and revenue from advertising, it is already a big success. The numbers of people visiting the Facebook page saw a recent surge. And the project has even come to the attention of the President of the National Council for Women, Maya Mursi. She praised the creativity of the initiative and said that these days, Egyptian society needs more such start-ups.

She referred to the exemplary nature of the project, namely the spread of reading culture and education in Egyptian public life. Mursi emphasised that any society, large or small, should be encouraged to read more and called on all young people to follow the example of Hadeer and Mohammad and start their own creative and relevant initiatives.

Success, challenges and visions for the future

Despite the broad support given to the book bike project, there are also numerous difficulties. The biggest problem, says Hadeer, is the refusal of government authorities to issue the permits and licences needed for an official realisation of the project.

This means they risk being subjected to police harassment and the moment they leave New Cairo, they are unable to move around freely on the streets. Then there are the extreme price hikes of recent months, which are also affecting the book market and causing a sharp decline in sales, as well as the risk of the books being damaged by vehicle emissions and the elements.

"We were also unable to attend this year's international book fair in Cairo, because the rent demanded by the book association responsible for a stand at the trade fair site was much too high," says Hadeer. But she remains confident about the project's perspectives: "I dream of extending the idea to other regions, so that we can eventually be present across the entire country. The goal is that there will be at least one book bike in every governorate, encouraging people to read and buy books."

Home
Print
Newsletter
More on this topic
Education in Indonesia: Boatloads of booksRemembering Naguib Mahfouz:″A wave of light on an infinite ocean of darkness″ Interview with the Egyptian author Youssef Rakha: "Taken together, these things would make up home..."
Related Topics
Book fairs, Education, Egyptian literature, Literature, Places of Dialogue
All Topics

They’ve already got the Louvre; they’ll soon have a Guggenheim Museum as well – and now the Emirates have added literature to their quest for cultural supremacy in the Arab world ... END_OF_DOCUMENT_TOKEN_TO_BE_REPLACED

Years in the making, Sisi's elite New Administrative Capital will isolate most Egyptians from their centres of government in an effort to fortify the regime against any social ... END_OF_DOCUMENT_TOKEN_TO_BE_REPLACED

Professor Timothy Brennan's "Places of Mind: A Life of Edward Said" is a detailed biography of one of the most important intellectuals of the twentieth century, taking us on a ... END_OF_DOCUMENT_TOKEN_TO_BE_REPLACED

China has long portrayed itself as a strong supporter of the Palestinian cause. It has also claimed that in sharp contrast to the stance of the USA, its position is based on ... END_OF_DOCUMENT_TOKEN_TO_BE_REPLACED

Recep Tayyip Erdogan, disappointed by the European Union’s reluctance to integrate Turkey into its ranks, has re-directed his country’s diplomacy toward the Maghreb and Africa to ... END_OF_DOCUMENT_TOKEN_TO_BE_REPLACED

END_OF_DOCUMENT_TOKEN_TO_BE_REPLACED
Social media
and networks
Subscribe to our
newsletter