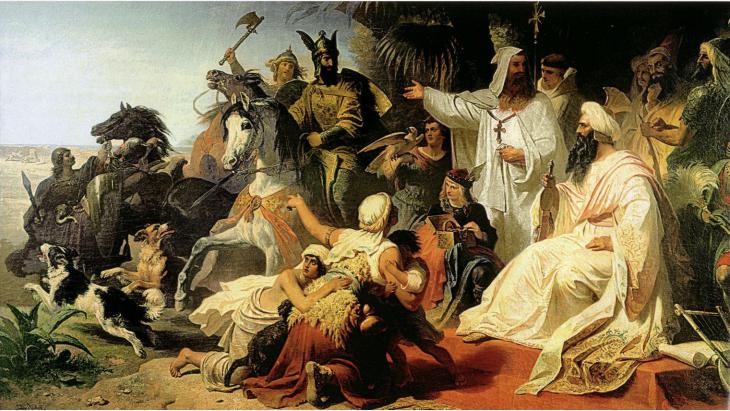 Caliphs and assassins
Between myth and reality

Although the Ottoman Caliphate was abolished in 1924, there remains a lasting fascination for this lost institution. The Tubingen Islamic studies scholar and historian Heinz Halm conducted meticulous research on the Fatimid caliphate in 11-12th century Egypt. Andreas Pflitsch read the book

On 3 March 1924, the Turkish national assembly passed a law with a large majority, the first article of which stated soberly and unambiguously: "The caliph has been deposed. Because the Caliphate is essentially intrinsic to the concept and purview of the government and the republic, the office of the Caliphate is abolished".

With the fall of the Ottoman Caliphate, some Arab nationalists saw the opportunity to establish their own Arab caliphate once more. A few days after the decision by the Turkish national assembly, Hussein ibn Ali, King of Hejaz, declared himself caliph – but outside his own clan, the idea didn′t catch on. A war on the Arab peninsula led to his abdication the same year. His son Ali then tried to win the military support of the Egyptian king Fuad I by offering him the office of caliph. Fuad I declined. The new King of Hejaz was Abdulaziz Ibn Saud, who later proclaimed the Kingdom of Saudi Arabia. He didn′t want to become caliph, either.

Two conferences of Muslim religious scholars in Cairo and Mecca in 1926 then made a last, desperate attempt to save the institution of the caliphate. They failed not least because the Arab public simply wasn′t interested in the question of the caliphate. The long-established division of the region according to nation-state criteria was irreversible.  A civic, secular culture had asserted itself. 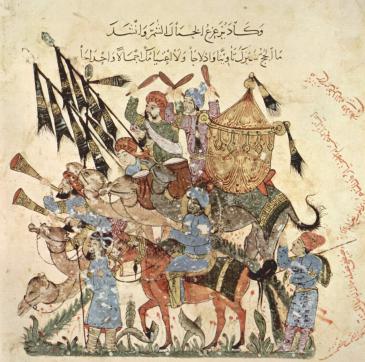 Backward-looking Utopian thinking: "today′s would-be caliphs are part of this tradition of glorifying the past, born of an unholy alliance between pressure for legitimisation and longing for the supposedly pure origins of the religion," comments Pflitsch

But it was Muslim theologians as well as secular intellectuals who spoke out against a reintroduction of the caliphate. In his 1925 book ″Islam and the Foundations of Political Power″, the Egyptian Ali Abdel Raziq argued that neither the Koran nor the teachings of Muhammad justified the caliphate. The Prophet′s political activities were driven by the circumstances of the age in which he lived and had nothing to do with the essence of Islam. In his book ″Beitraegen zur Arabistik, Semitistik und Islamwissenschaft″ (Essays on Arabic, Semitic and Islamic Studies, Leipzig, 1944), the orientalist Franz Taeschner says succinctly that "today, we may consider thoughts of a caliphate defunct".

That is now in the past: thoughts of a caliphate have recently undergone a surprising renaissance. In Nigeria, Boko Haram declared the north-east of the country a caliphate in August 2014. Shortly before that, Abu Bakr al-Baghdadi had proclaimed himself the caliph of "Islamic State".

Clearly the title, not to mention the power and historical aura bound up with it, still holds a certain fascination, in both East and West. The spectrum of associations bound up with the title could hardly be broader, extending from unscrupulous terrorist leader to exotic fairytale caliph.

Harun al-Rashid, who governed the Abbasid Caliphate from Baghdad between 786 and 809, became the archetypal caliph through his role in the stories of the ″Thousand and One Nights″. As the epitome of the benevolent and wise oriental ruler, he represents the caliphate at the height of its power. In fact, the stories are the expression of a nostalgic longing for a golden age, which was already over by the time the ″Thousand and One Nights″ was written. The historical caliph became a fairytale character, a gregarious hedonist and lover of evening drinking sessions, although the historical caliph was apparently a more pious and serious man, who also had an unsuccessful running battle with a rival caliph. The example of Harun al-Rashid shows that where caliphs are concerned, historical reality and myth have always diverged.

Glorification of the past

If there is one constant in the history of the caliphate, then it is the discrepancy between ideal and reality demonstrated here, coupled with the deep-seated conviction that everything used to be better. The history of the caliphate is a history of backward-looking Utopian thinking. Today′s would-be caliphs are part of this tradition of glorifying the past, born of an unholy alliance between pressure for legitimisation and longing for the supposedly pure origins of the religion. A glance at history might help counter this nostalgic distortion of the past. The idealised image of continuity and legitimacy would then quickly collapse. 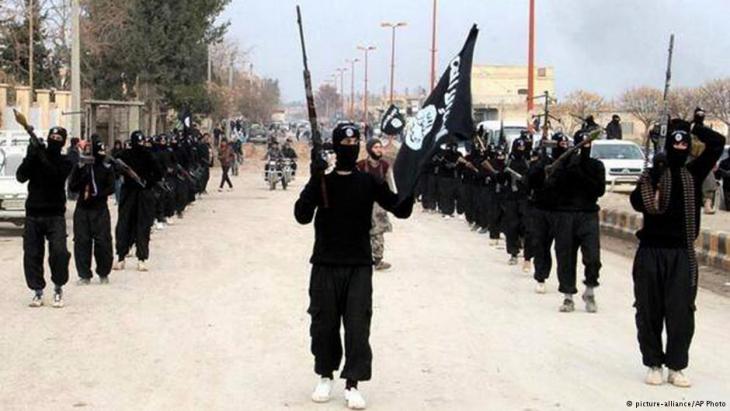 Surprising renaissance: "in Nigeria, Boko Haram declared the north-east of the country a caliphate in August 2014. Shortly before that, Abu Bakr al-Baghdadi had proclaimed himself the caliph of Islamic State," writes Pflitsch

The Tubingen Islamic Studies scholar Heinz Halm has rendered outstanding service to historical accuracy with his research on the Fatimid Caliphate in Egypt, laying the foundations for just such a historical demythologisation in the process.

Halm had already provided detailed analysis of the rise and rule of the Fatimids in Egypt between 973 and 1074 in two earlier works. The volume on caliphs and assassins in Egypt and the Near East at the time of the First Crusade (1074-1171) was published in 2014. It was the culmination of a quarter of a century of hard graft for Halm, who has analysed an impressive array of Arabic, Persian and Latin sources.

The period Halm covers here promises some particularly interesting stories: the age of the Crusades, and of the assassins who over the centuries have passed into legend in both East and West and today are seen as the inventors of the politically motivated terrorist attack. Against the backdrop of current events in Syria and Iraq, a reader will approach this book with great expectations – and be sorely disappointed. Of course, you can argue about the legitimacy of drawing parallels with so-called Islamic State′s current religiously-based reign of terror in the region. That may be out of the question for an historian. The complete absence of narrative elements, arcs of suspense – even the slightest hint of a story – may also be down to Heinz Halm′s professional ethos as a historian, as may his linguistic and stylistic reserve. But this places unreasonable demands on the reader. As the author plods along, sticking close to the sources, scrupulously lining up detail after detail, name after name, battle after battle and royal intrigue after royal intrigue, without a single change of tone, without ever digressing and risking an analysis or classification, it all becomes incredibly, agonizingly dull. Heinz Halm has turned gold into straw.

Home
Print
Newsletter
More on this topic
History of the Caliphate: We are all caliphs!Global history: Playing with the relativity of perspectivesIS cultural vandalism: A trail of destruction Germany's Ahmidiyya Muslims: Celebrating 100 years of the Caliphate
Related Topics
'Islamic State' | IS, Boko Haram, History of the Near and Middle East, Islam and the West, Radicalisation
All Topics

Despite what heads of state may claim, the Russian attack on Ukraine is not a wake-up call for a self-confident Europe that defends its values. The war is accelerating the decline ... END_OF_DOCUMENT_TOKEN_TO_BE_REPLACED

At the EU's outer borders, the right of migrants to a fair asylum procedure continues to be systematically disregarded. Take Greece, for example: in the worst case scenario, those ... END_OF_DOCUMENT_TOKEN_TO_BE_REPLACED

Madrid's about-face on the Western Sahara conflict has enraged Algeria. Trade relations have been frozen unilaterally and a cut in gas supplies to Europe could be in the pipeline ... END_OF_DOCUMENT_TOKEN_TO_BE_REPLACED

Mourad al-Marouai was just nine when a landmine killed him on a beach in war-torn Yemen, a tragedy that will haunt his family forever. After a swim, the little boy "suddenly ... END_OF_DOCUMENT_TOKEN_TO_BE_REPLACED

A ceasefire has been in effect in Libya for the past year and a half. Yet after Russia's attack on Ukraine, another proxy war looms in Africa's most oil-rich country. Mirco ... END_OF_DOCUMENT_TOKEN_TO_BE_REPLACED

The Ukraine war has seen energy prices spike with oil producers in the Middle East making more money than ever. But will it put the brakes on long-planned reforms to diversify oil ... END_OF_DOCUMENT_TOKEN_TO_BE_REPLACED
Author:
Andreas Pflitsch
Date:
Mail:
Send via mail

END_OF_DOCUMENT_TOKEN_TO_BE_REPLACED
Social media
and networks
Subscribe to our
newsletter