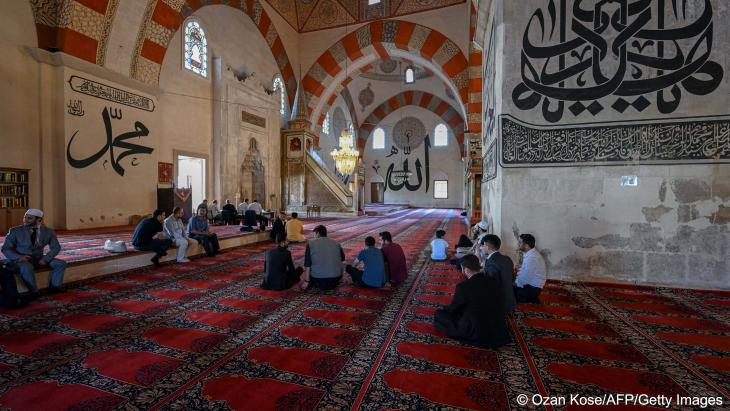 Cupping his hands to his ears, one of the contestants in an annual competition for Turkey's most melodious religious voice leans closer to the microphone to intone a tender call to prayer.

"Allahu akbar" ("God is greatest"), he sings in a slow, cascading voice, elbows sticking out at right angles, his words echoing off the golden-tinged stones of the majestic Eski Camii mosque in the city of Edirne.

Adorned with striking Arabic calligraphy and completed in 1414, when the northwestern city was the capital of the Ottoman Empire, the mosque is hosting the latest round of the competition, in which five muezzins – the clerics who issue the ezan (adhan in Arabic) call to prayer from minarets five times a day – are competing for a place in the final on 17 August. Facing the contestants, a panel of five judges take studious notes.

"I started at the age of 10, during summer school at the mosque," said the eventual winner, Abdullah Omer Erdogan. Sporting an impeccable beard, the 25-year-old takes extraordinary precautions to protect his voice. He shuns the cold, drinks only lukewarm water, and even avoids certain positions in his sleep so as not to strain his vocal cords. His efforts could translate into national fame.

Turkish muezzins – one of whom recited the ezan over Edirne's old town – swept the top two spots in a televised competition organised in Saudi Arabia in April.

Turkish President Recep Tayyip Erdogan, who is devoutly religious and is facing a difficult election next year, recorded a congratulatory message for the winners the next day. "May Allah be with you," said Erdogan, whose two-decade rule has seen Turkey build nearly 15,000 mosques.

One appeared opposite a statue of the secular Turkish state's founder Mustafa Kemal Ataturk on Istanbul's Taksim Square, the crucible of the polarised and occasionally restless country's politics.

'We saved the country'

The vast square, long a symbol of struggle between Turkey's secular and religious forces, gave birth to protests in 2013, the violent suppression of which is seen by some as the genesis of Erdogan's more authoritarian streak. His rise to power as prime minister in 2003 was built on his defence of Turkey's religious Muslims, whose rights had been squeezed in the constitutionally secular state.

The Turkish leader has repaid that trust by building the country's largest mosque on a hill overlooking the Bosphorus Strait and converting the former Hagia Sophia church from a museum into a mosque in 2020. In turn, clerics from nearly 90,000 mosques responded to Erdogan's appeals – delivered via FaceTime on a mobile phone – and called on the faithful to block a military coup attempt in July 2016.

Erdogan's supporters thronged the streets and stared down the coup leaders, who were jailed during a wave of political repression that followed in which thousands were put behind bars for life.

"We called the people out on the streets and saved the country," said Edirne mufti Alettin Bozkurt. "That night, we saw the power of the ezan."

Erdogan is making religion a recurring theme of his speeches as he nears an election that polls show he might lose because of Turkey's mounting economic problems. He has accused his secular opponents of trying to "silence the ezan" – a charge that resonates with Islamic conservatives who form the base of his political support. There is no call to suppress religion on the platform of any political party.

But Erol Koymen, a post-doctoral fellow who studies Turkish and Ottoman social theory and music at the University of Chicago, said secular voters are growing increasingly anxious. "I think there is a widespread sense among secularists that the volume of the ezan has increased as part of the ruling regime's efforts to transform the Turkish public sphere since the coup attempt," said Koymen. "This, in turn, has produced an increasing distaste for the ezan among secularists."

Citing health concerns, Turkey's increasingly powerful directorate of religious affairs asked mosques in 2017 to limit their ezans to 80 decibels – roughly the equivalent of an alarm clock. At the Old Mosque in Edirne, mufti Bozkurt was offended that some want to dial down the ezan.

"The ezan is a legal right!" he exclaimed. "Just as Christians can easily hear church bells, all Muslims should be able to hear the call to prayer."    (AFP)

END_OF_DOCUMENT_TOKEN_TO_BE_REPLACED
Social media
and networks
Subscribe to our
newsletter