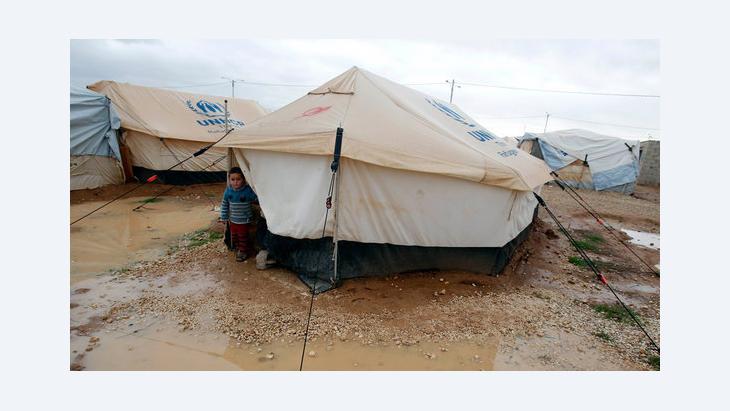 Refugee camps are other-worlds where a tent becomes a home, a field of mud is a playground and where thousands of displaced Syrians are trying to adapt to a new, grim reality. Karen Leigh went to see for herself

In my capacity as contributor and editorial advisor at Syria Deeply, a new platform designed by journalists and technologists to provide in-depth coverage of the war in Syria, I have made several trips to Zaatari refugee camp, a dusty hell on the Syria-Jordan border, and Atma, a muddy squalor just inside the devastated country, near where it merges with Turkey.

Photos that ran in global media recently showed that Zaatari's dirt paths were flooded, its tents – none insulated for winter cold, let alone water – bobbing along.

My thoughts went to the afternoons I had spent there and the freezing night when, smuggled in by an aid worker friend and sleeping under thin felt blankets provided by UNHCR, I got a blessedly-short taste of what it's like to call the place home.

My eyes and ears while on the ground were a 27-year-old handler, a Syrian employed by the Jordanian government and tasked with guiding foreign journalists through the tent maze, and Nadine, a sparkly-eyed 12-year-old from Deraa, who lives with her family in one of these nameless white pods. 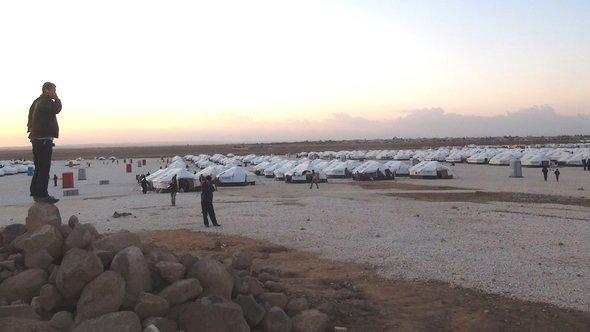 The misery of the refugees at the Zaatari refugee camp was deepened last week when the worst winter storm in a decade turned the camp into a muddy swamp, knocking down at least 500 tents in freezing temperatures

For the purpose of this story, I'll call my guide Omar. He lives down the road from the camp's forebidding gates, stowing away on the floor of a dormitory. He can't afford rent on what the Turks are paying him, and he hasn't had internet access in weeks.

The last 26 years of his life were spent in Damascus, gong to engineering school, seeing friends in cafes. Now when he wants a mobile signal, he must join the other young men who gather at the camp's highest point – a very low hill set back from the tents – and hold his device in the air, trying to catch a feed back to Syria.

Nadine's tent was one of the ones we passed on our evening walk through the camp, but our team had already spent the better part of an afternoon with her family, talking to her mother, her young siblings and cousins, her father periodically pulling out his iPhone. Something about that phone got to me – a realization that this had been a family with money for a pricey phone, with a life to record on it.

Everyone in the tent was cold. I was told that two of the UNHCR blankets are distributed to each family, and that they must share. Everyone sleeps shoulder to shoulder. Everyone eats camp rations, simple food like rice and lentils. Everyone shares the dirty facilities interspersed among the tents. More than 40,000 Syrians live in such fashion, many of them in this stretch hailing from the ravaged cities of Homs and Deraa.

At one point, Omar showed me to a café tent; shoes were lined up outside and shisha and coffee bubbled within. I guiltily choked down an oversweet tea and made friends with a team from the UN's offices in Seoul.

Cut off from aid

Atma, where a Turkish border checkpoint must be crossed, is inside Syria and thus cut off from the international aid granted to Zaatari by the likes of Medicines Sans Frontieres, the Norwegian Refugee Council and even the UN. The Turkish government has been helping, but it's not enough.

Mud dominates the camp, from its front gate to its cooking tent, where giant cauldrons boil rice and beans. The cauldrons are hauled out by Syrian men and distributed each day, along with a bread ration. Sometimes they slip in the mud and everything spills. 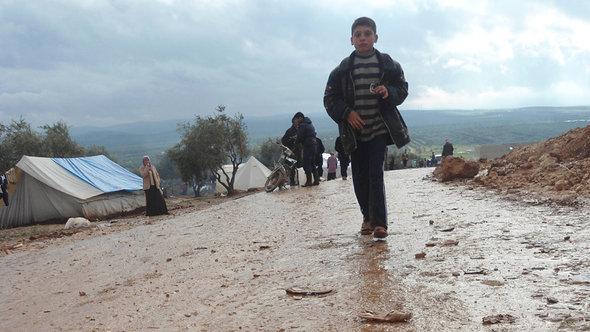 Sordid isolation: Atma is inside Syria and thus cut off from the international aid by the likes of Medicines Sans Frontieres, the Norwegian Refugee Council and even the UN

A young woman clutching a toddler follows me around. After every interview, she asks in Arabic for something warm to clothe her baby - a hat, a scarf. The camp manager tells her it's my job to write, and not to give donations. "Don't give her anything," he says. I am both grateful and devastated.

One of the more disturbing narratives in Atma is that of the 50 or so pregnant women who are here. They dread not giving birth but raising their fragile, unprotected new babies in this freezing mud. One woman I meet is eight months pregnant with her 11th child. She is 29-years old.

Children play everywhere; as I walk along the main slope, a group plays tag and feasts on a package of cheap cookies bought for them by a colleague. It's an exciting day here - a famous Syrian television star, who has himself joined the revolution against President Bashar Assad, has stopped by to perform and meet-and-greet, providing cheer.

The kids, their bare or sandaled feet icy to the touch, crowd a passing car. "Syria hurra!," they shout, ("Free Syria!") I can only hope they get to see it, and soon.

In this essay, renowned Lebanese journalist and writer Hazem Saghieh asks whether the Arab Levant, which stretches from Iraq in the East to Egypt in the West, will remain an ... END_OF_DOCUMENT_TOKEN_TO_BE_REPLACED

With his fist bump greeting for a man he previously called a pariah, US President Biden has paved the way for Saudi Crown Prince Mohammed bin Salman's return to the international ... END_OF_DOCUMENT_TOKEN_TO_BE_REPLACED

The murder of a female student at Mansoura University in the Nile Delta has sparked a long overdue debate on femicide in Egypt. Karim El-Gawhary reports from Cairo END_OF_DOCUMENT_TOKEN_TO_BE_REPLACED

When times are tough, the exchange of ideas and perspectives becomes especially important. It takes dialogue. And at Deutsche Welle, we need distributors and cooperative partners ... END_OF_DOCUMENT_TOKEN_TO_BE_REPLACED

Women in the Levant have long used needlework to depict the region’s history, its landscapes, customs and traditions. Intricately embroidered panels, varying in style, colour and ... END_OF_DOCUMENT_TOKEN_TO_BE_REPLACED

A straightforward message emerged from last week’s meeting in the Negev desert of the foreign ministers of four Arab countries, Israel and the United States: Israel is key to the ... END_OF_DOCUMENT_TOKEN_TO_BE_REPLACED
Author:
Karen Leigh
Date:
Mail:
Send via mail

END_OF_DOCUMENT_TOKEN_TO_BE_REPLACED
Social media
and networks
Subscribe to our
newsletter