Surrounded by the desert and in the middle of the idyllic oasis of Fayoum is Mohamed Abla's Caricature Museum – the first such museum in the Middle East. The museum enjoys the reputation of being a special place for creativity, but also sees itself as a response to the unspeakable caricature controversy. A report by Amira El Ahl 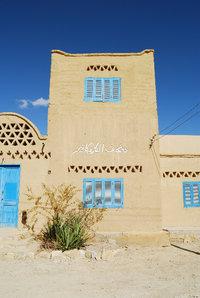 Witty, creative, and provocative: the Caricature Museum in Fayoum sees itself as a Mecca of caricaturists and art lovers from all over the world

​​ The pyramids stand majestically in the early morning sum, completely unperturbed by the chaotic frenzy taking place right at their feet on the main traffic artery. The burial site of the Pharaohs no longer lies at the edge of the city. The housing settlements stretch out into the desert like a giant octopus, drawing an ever-tighter ring around the monumental structures. Only when one leaves the pyramids behind and travels in a southwesterly direction does a sense of calm gradually set in.

The drive leads through the desert for almost 100 kilometres along a thin band of asphalt. The destination is Fayoum, Egypt's largest oasis with around two million inhabitants. It spans one of the country's richest natural environments and is only an hour's car ride from the Moloch that is Cairo. The visitor encounters the deep green of cultivated fields, palm groves, and fruit plantations. Between the yellow desert sand of the north and the fertile soil of the south lies Qarun Lake, a refuge for a wide variety of fish and birds.

The small artist colony of Tunis is located at the western end of the oasis on a small elevation overlooking the lake. Most of the houses here are traditional Fayoum clay buildings, which keep the walls cool even during the hottest days of summer.

Orange coloured flowers grow in some of the fields, while others are full of clover for animal feed. Terraced gardens are flush with organically grown salad, tomatoes, cucumbers, and much more. The air is clear and, with the exception of the twittering of birds and the occasional donkey braying, nothing disturbs the idyllic atmosphere. In such moments, Cairo seems light-years away.

The Tunis artist colony has existed for 25 years in Fayoum. At first, it consisted of only a handful of creative souls that had settled in the oasis. Today, it is home to a number of writers, painters, and, above all, potters, whose work has made the village famous.

Civilized response to controversy: "I wanted to show that there are also caricatures in Egypt, and they are political as well as socially critical", says Mohamed Abla, founder of the first Arab caricature museum

​​ One of the first to settle here was the painter Mohamed Abla. "Tunis possesses a very special landscape," says the 55-year-old artist and looks out over the fields to the lake.

Five years ago, Abla opened the Fayoum Art Center on the highest point of the settlement. Courses in painting, video art, sculpture, and graphics are regularly offered here. "Every year in January we organize a six-week winter academy, which is attended by artists from all over the world," explains Abla in fluent German. He is married to a Swiss woman and had studied Art and Psychology in Zurich and Alexandria. He has also had an atelier in Hannover for many years.

The first caricature museum in the Middle East

It has long been known in artistic circles that Tunis is a centre for creative activity and those interested in art. Mohamed Abla, however, wants to acquaint Tunis to a wider public. This is why he opened a caricature museum in Tunis a year ago, the first such museum in the Middle East, thereby fulfilling his long cherished dream.

"I am crazy about caricatures and have collected them my whole life," says Abla, and his lips draw together into a wide smile under his bristly moustache.

The idea of the museum specifically took form after the controversy surrounding the Danish Mohammed caricature. "I wanted to offer a civilized response to this controversy – my own kind of response," says Abla. "I wanted to show that there are also caricatures in Egypt, and they are political as well as socially critical."

For decades, the painter has collected Egyptian caricatures, which he aims to preserve as part of his country's cultural heritage. "We have such a rich history in terms of caricature art. This treasure should not be lost."

​​ The artist sees no discrepancy in the fact that he chose the remote location of Tunis to locate the first Arab caricature museum. On the contrary. "For one thing, the museum wonderfully suits this community of artists, musicians, and writers," explains Abla. And for another, he feels that the country's cultural life shouldn't all be centred on the capital. After all, Egypt is more than just Cairo.

The spacious traditional adobe building, in which the caricature museum is housed, currently holds 200 caricatures from the beginning of the 20th century to the present day. Most of the drawings are originals with the exception of a few items that come from newspapers and magazines. Most of these caricatures are among the oldest works in the collection.

Daring, political, and critical of society

Visitors to the museum are already greeted in the entrance hallway with newspaper caricatures from the 1920s. The oldest caricature in the collection dates back to 1927. The drawings are in colour, and they seem daring, direct, and, even for their times, are political and critical of society.

The caricatures appeared in newspapers such as "Al-Matraqa", "Al-Fukaha" and "Al-Kashkoul" which no longer exist, as well as in publications such as "Ruz al-Yusuf" and "Sabah al-Kheir" which continue to be printed even today.

The history of Egyptian caricatures stretches back into the 19th century. "The first caricature that appeared in Egypt was drawn by Jakob Sanoua in 1879," recounts Mohamed Abla.

Wielding a sharp pen against the monarch

Sanoua clearly understood even back then how to exercise political criticism through his drawings. Since his criticism was primarily at the king, the artist was eventually forced to flee into exile in Paris. 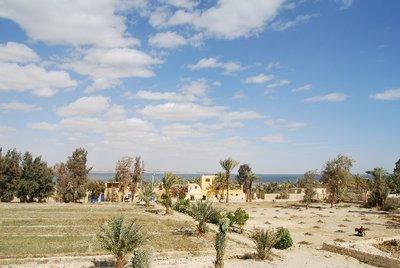 Egypt is more than just Cairo: "The country's cultural life shouldn't all be centred on the capital," says Mohamed Abla

​​ It seems only natural that Egypt should have become a creative centre for caricaturists. "Egypt not only has the oldest press in the region, but Egyptians are also renowned for their humour," says Abla. And no topic is taboo.

Naturally, caricatures are also a mirror of the momentary political and social situation. "Through caricatures, it is possible to see exactly what concerned the people in the country at that specific point in time," says Mohamed Abla.

During the early 19th century, the British occupation and the king were the main targets of caricaturists. After the 1952 revolution, the focus turned to imperialism, the USA, and Israel.

"Nowadays, artists address global as well as local issues," says the museum director, "and they are increasingly critical of society." Everything receives a satirical illustration – terrorism, fanaticism, the veil, the American occupation of Iraq, the Middle East conflict, environmental protection, and the finance crisis.

The styles of the artists are as various as the topics they choose to draw. The most well known artists are George Bahgoury, Mustafa Hussein, and Higazy, who Mohamed Abla particularly admires.

A fine sense of tact required

"Higazy is extremely sparing with words, but his caricatures are always ambiguous." This is probably a legacy from the Nasser era, when those who publicly criticised the state of affairs were harshly punished. Even then, Higazy dealt with social issues like poverty, which at the time required a very fine sense of tact with respect to the regime.

Mohamed Abla has drawings from a total of 55 artists. "Caricatures are far more widespread than in Europe," says Abla. His goal for the future is to establish contacts with caricature museums from all over the world and promote collaboration in order to achieve a greater awareness of Egyptian caricature art abroad.

He is also concerned with the issue of artists being properly paid for their work. "Freelance artists get around 50 Egyptian pounds for a drawing," explains Abla. This is not even the equivalent of seven euros. In order to change this, the painter would like to start up a publishing house to print books and postcards of the caricatures.

A new exhibition at the Caricature Museum will open in March. Mohamed Abla possesses over 500 caricatures and more are added every year. These will be shown to the public in an annual rotation of exhibits.

Mohamed Abla's creativity and energy know no boundaries. After the Fayoum Art Center, the Caricature Museum, and the already envisaged caricature publishing house, the painter dreams of setting up an additional museum in Tunis. This one would be devoted to the theme of Egyptian photography – another collection passion of the Egyptian.

"Jihad – The Musical"
Dangerous Trivialization
"Jihad - The Musical" premiered at the Arts Festival in Edinburgh. It makes fun of Islamic terrorism – and is encountering much resistance. Ralf Sotschek reports

The Egyptian Center for Culture and Art
The Best Music in the "Place"
As is often the case in the Arab world, one almost has to search with a magnifying glass to find an independent art and cultural scene, even in Egypt. It is, however, increasingly showing signs of flourishing. The Egyptian Center for Culture and Art is one of the independent cultural centers to have emerged in recent years in the mega city Cairo. By Sebastian Blottner

www
The Caricature Museum in Fayoum

END_OF_DOCUMENT_TOKEN_TO_BE_REPLACED
Social media
and networks
Subscribe to our
newsletter