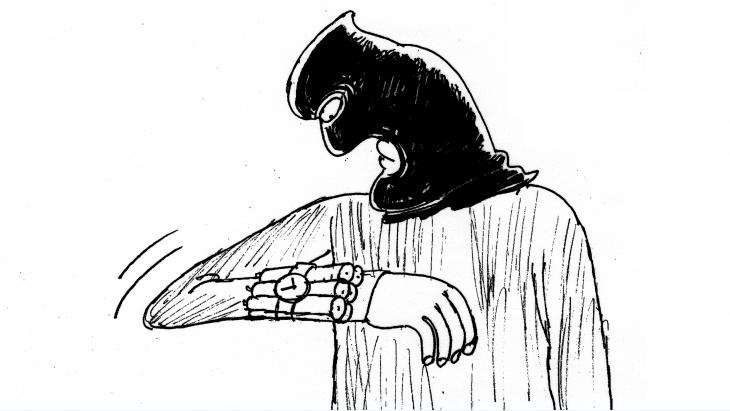 Caricaturists in Iraq have been under pressure for years: while the Kurdish regional government has been waging all-out war against them in the north of the country, their colleagues in Baghdad live in fear of jihadist extremism. By Birgit Svensson in Baghdad

″In 2007, I wanted to die. I wanted to die in Baghdad with a pencil in my hand.″ This was at a time when civil war was raging in the Iraqi capital, when neighbours were killing one another and blood was flowing freely in the streets. Yet, Abdul Raheem Yassir survived and continued to draw. ″My family was in Syria and my friends and colleagues had fled Iraq. I was alone.″

Probably his most personal caricature from this period shows a man with an Iraqi flag in his hand while everyone around him has turned their back and is running away. Sunnis against Shias and vice versa: ″This was the worst time in my life.″ Regardless of what he drew and regardless of what writers and painters produced – the results always caused a scandal and someone would always take offence. Yassir began illustrating children′s books. Then, when the bloody years of reciprocal slaughter finally ended, Daesh, the terrorist militia of Islamic State, arrived on the scene.

His modest house in the Baghdad district of Zaqouna has become his refuge. Here, the caricaturist feels safe; this is where he develops his cartoons and comes up with new ideas to convey on paper the situation in Iraq and the world. These days, Abdul Raheem Yassir is one of Iraq′s leading caricaturists. His work is featured daily in "Al Sabah" (The Morning) – Iraq′s largest newspaper – and is much in demand with other, more diverse media outlets. 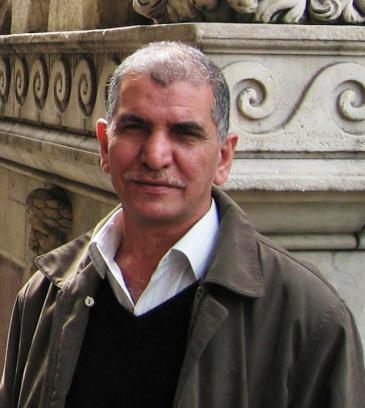 "We used to be afraid of the government. Today, we fear that the government is unable to protect us from the extremists" – Abdul Raheem Yassir is one of the leading caricaturists working in Iraq today

Yet, political caricatures remain his specialty. ″The role of the caricaturist in Iraq is now greater than ever,″ he says, describing developments in recent years. ″People are increasingly looking for caricatures.″ Yet, a satirical magazine like "Charlie Hebdo" does not exist in Iraq. ″We never have been and never will be Charlie.″

Out of solidarity with his colleagues in Paris, he and other creative artists in Baghdad observed a minute of silence. And a year ago, when the terrorist attack took place, the newspapers in Iraq were filled with expressions of sympathy. There were many discussions and the word horaya, Arabic for freedom, frequently made the rounds. Freedom of expression and the press became an issue and was defined as a value worth fighting for in Iraq, a country characterised by dictatorship and terrorism.

″I personally do not find the caricatures in Charlie Hebdo particularly outstanding. The world cannot simply be divided into black and white, as they do.″ On a planet with seven billion inhabitants, everyone has a different opinion. This diversity should be respected. Yet, uninhibited freedom is problematic.

Yassir leads his visitor to his workroom, which features a large conference table, a computer, and many drawings hung on the walls. The first meeting of caricaturists in Iraq took place here in his house – at this very table exactly forty years ago. Yassir show photographs from the time. He is now 64 years old, his hair and moustache have turned grey and of the seven caricaturists from that first meeting, only two remain in Iraq. The others have left the country, while one is dead.

Ambiguity as a survival strategy 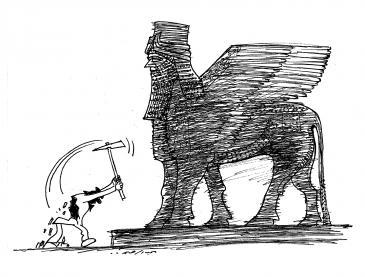 Sharp criticism against the jihadism of IS: the brutal destruction of the country′s artistic and cultural heritage is a hot topic for Iraqis. The caricature shows a winged Assyrian figure, guardian of the temple destroyed by "Daesh" in Nimrud

″Under Saddam Hussein, we were not allowed to portray the president. Now, it′s the religious fanatics who are after us.″ Were he to take pot-shots at the hijab/niqab issue, he would also have to criticise Western liberality in the same breath. Having a go at Islam as a religion is simply taboo.

″Many Iraqis also feel that criticism of Jesus and Christianity should not be permitted either.″ For Ahmed al-Rubaie, who worked for the "Al Sabah al-Jedeed" newspaper (The New Morning), the pressure was simply too much. He died from a heart attack after receiving constant threats. ″It was the fear that killed him.″ Those who are keen to avoid pressure do not dare to publish. ″My caricatures have always been ambiguous,″ says Yassir, revealing his survival strategy. During the Saddam era, he learned how to leave room in his work for open interpretation.

As Iraqi society changes and develops, humour and satire are still regarded as being on a knife-edge. Yassir asserts that satirists, himself included, can now work freely in Baghdad. Following the outbreak of civil war in Syria, his family has returned to Iraq. There is no longer any state censorship, as there was under Saddam. ″I can criticise the government as much as I like, even the president and the prime minister.″ At the moment, satirists have nothing to fear from these quarters.

Society as a whole has become more and more open. With the increased presence of new media and the Internet, people are slowly, but steadily becoming aware that there is more than just one point of view. Yet, the number of extremists has also grown. The catchword for this is Daesh. ″We used to be afraid of the government. Today, we fear that the government is unable to protect us from the extremists.″

Kurdish regional government at war with the caricaturists

Conditions in Kurdistan are different, reports Yassir on the situation of his colleagues in northern Iraq. There is a full-scale war going on between caricaturists and the Kurdish Regional Government (KRG) in Erbil. The artists are under constant surveillance. There was recently a demonstration in Baghdad in support of press freedom in Kurdistan. This is something of a disgrace for the KRG, which is always only too keen to boast that, when it comes to development, it occupies a pioneering position ahead of the rest of Iraq. 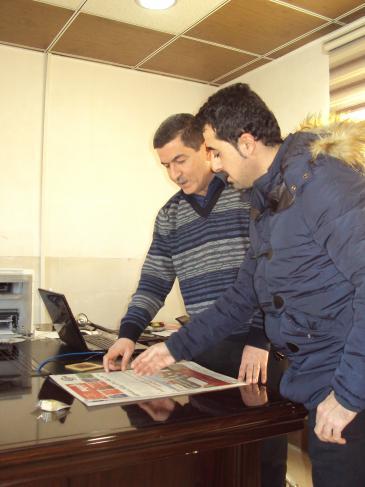 "It′s so hard to find good caricaturists", complains Asos Hardi, publisher of ″Awene″, a weekly newspaper, "they have either given up or taken to self-censorship."

″Of course, we were shocked by the terrorist attack on Charlie Hebdo in Paris,″ says Asos Hardi from the Kurdish city of Sulaymaniyah, recalling the reaction of his editors a year ago, when 11 staff members of the satirical magazine were brutally murdered. ″But this is normal here. We experience events like this every day.″

His weekly newspaper, "Awene" (The Mirror), faces a considerable struggle. With a weekly print run of only 4000, the paper is barely above the minimum economic subsistence level. It is not, however, only the burden of financial survival that keeps the publisher awake at night, but, more importantly, the political situation in Iraqi Kurdistan. Independent journalism has now become practically impossible. If a reporter writes something that those ″up above″ do not like, he is bombarded with threatening telephone calls. Hardi has been detained a number of times for writing articles critical of the government and had to pay a small fortune to be released.

″We no longer get any good caricaturists,″ complains Hardi, ″as they have either given up or taken to self-censorship.″ The satirical magazine "Sixurma", which was founded ten years ago during the period of liberalisation under both the KDP and PUK, the two Kurdish political parties, has since ceased publication.

After the fall of Saddam Hussein in 2003, the Kurdish authorities promoted the goal of democratisation of their autonomous region. Now, the Kurdish population is experiencing a return to autocratic structures. The developments in Kurdish northern Iraq with respect to freedom of expression and of the press are moving in a contrary direction to those in Baghdad.

″Who has benefitted from the caricatures?″ asks Asos Hardi resignedly. He offers the answer himself: ″Radicalism has benefitted.″ What he means here is not only the brutality of IS, which has mercilessly persecuted and murdered critical journalists, but also the radicalisation of his own Kurdish regional government. The authorities do not tolerate any dissent, cling to power with authoritarian vigour – and bitterly oppose any criticism.

Home
Print
Newsletter
More on this topic
Fighting Islamic State with satire and black humour: Terribly funny Interview with the cartoonist Khalil: "There is nothing that can justify this sort of violence"Islamic satirical magazine "Cafcaf" from Istanbul: "No, nothing has been forgiven!"
Related Topics
Cartoons, Charlie Hebdo, Iraq War, Kurds, Media in the Arab World, Saddam Hussein, Visual arts
All Topics

November 2022 sees the Arab world firmly in the spotlight with the COP27 in Egypt and the FIFA World Cup in Qatar. Public trust in MENA governments is weak, thanks to their ... END_OF_DOCUMENT_TOKEN_TO_BE_REPLACED

Thanks to climate change, the Middle East is heating up faster than any other part of the world, putting the region's ancient pyramids, castles, holy and other heritage sites at ... END_OF_DOCUMENT_TOKEN_TO_BE_REPLACED

In the run-up to the COP27 global climate summit, hosted by Egypt in November, it is worth noting that little rainfall, aggressive heatwaves and worsening drought make the Middle ... END_OF_DOCUMENT_TOKEN_TO_BE_REPLACED

Hundreds of porters, locally known as ‘kolbars’, cross the mountainous border between Iran and Iraqi Kurdistan all year round. With Iran’s economic crisis deepening, ever more ... END_OF_DOCUMENT_TOKEN_TO_BE_REPLACED

Once again, political deadlock is driving thousands of Iraqis to Tahrir Square. They want new elections, but the parliament refuses to dissolve. Elected representatives are now ... END_OF_DOCUMENT_TOKEN_TO_BE_REPLACED

The clashes in Baghdad between supporters of Muqtada al-Sadr and pro-Iranian militias show that an intra-Shia power struggle is in full swing. An analysis from Cairo by Karim El- ... END_OF_DOCUMENT_TOKEN_TO_BE_REPLACED
Author:
Birgit Svensson
Date:
Mail:
Send via mail

END_OF_DOCUMENT_TOKEN_TO_BE_REPLACED
Social media
and networks
Subscribe to our
newsletter