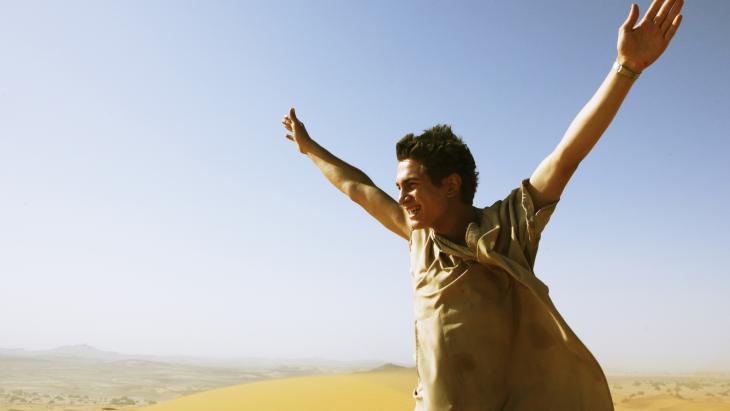 Understanding the Cultural "Other"

With her exquisite and sensitive film "Exit Marrakech", Caroline Link demonstrates genuine openness towards Morocco – the beauty of its landscape, the social diversity, and the country's cultural wealth, as well as for its social extremes and contradictions. A review by Christoph Leisten

Well before the Arab Spring, European filmmakers have been attracted by the particular charm of Morocco's landscape. It has been known for some time that Caroline Link, whose exceptional familiarity with the African continent was amply displayed in her Oscar nominated film "Nowhere in Africa", would be shooting her next film in Morocco. Accordingly, there was a great deal of anticipation as to how she would deal with the issues of the region.

In "Exit Marrakech" (click here for a link to the movie trailer with English subtitles), Caroline Link sends a successful German theatre director on tour through Morocco with Gotthold Ephraim Lessing's stage classic "Emilia Galotti". The piece is performed in exquisite theatres for selected audiences. This serves as the background to a relationship drama between Heinrich, the director, and Ben, his 17-year-old son, who lives with his divorced mother and at boarding school, and now has to spend the summer vacation with his father in Morocco. As such, Link was quite clever with her choice of literary allusions.

Lessing's play is one of the most important works of the European Enlightenment. In a most penetrating and emphatic manner, the play scrutinizes the values of bourgeois autonomy, while highlighting the dangers posed when morality falls under the blind megalomania of rigorous absolutism. 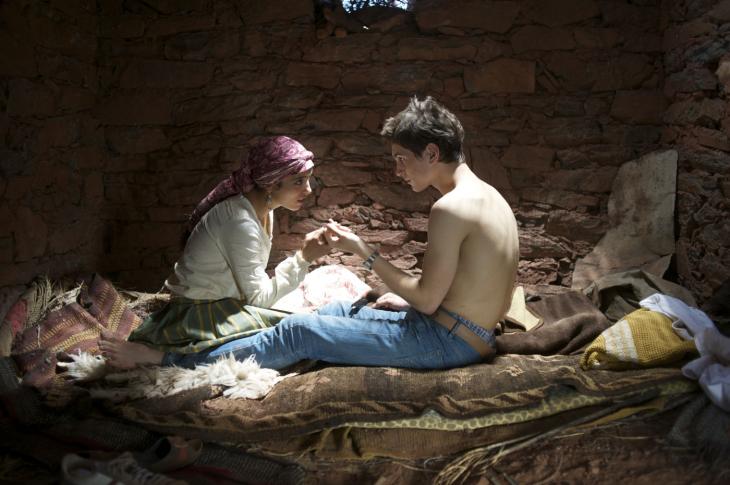 Ben (Samuel Schneider) takes advantage of every opportunity to satisfy his curiosity about his foreign surroundings. - "The images in this film unfold with acute precision and intensity," Christoph Leisten writes

Lessing's work is depicted only once in the film, and that is the play's final scene, in which the bourgeois father strangles his own daughter in order to preserve her virtue. "And now you have to torment the Moroccans with this classical shit," says Ben, who just arrived in the city, not to be met by his father at the airport, but instead picked up by a limo, having to find his way to the theatre by himself and managing to catch the final minutes of the performance.


What the young Ben, played with remarkable subtlety and sophistication by Samuel Schneider, expresses here with all of his adolescent impartiality is nothing less than the fundamental dilemma characterizing his father's theatrical tour, namely, that this cultural exchange is a one-way street. It is no wonder then that Heinrich (confidently portrayed with his characteristic dreariness by Ulrich Tukur) takes no interest whatsoever in the culture and people of Morocco, but instead makes a quick retreat after the polite applause in the theatre to the pool of his luxury hotel and whiles away his time with American travel literature.

Curiosity about his foreign surroundings

By contrast, his son Ben takes advantage of every opportunity to satisfy his curiosity about his foreign surroundings. This is clearly the same curiosity that propels Caroline Link.

Ben goes off on his own to explore the city, meets children in the souks, sees two Moroccan men who he had previously met after one of the performances, and, finally, encounters Karima (superbly played by Harsia Herzi), who apparently works as an occasional prostitute and approaches him at a seedy nightclub. Ben gives her money without wanting to sleep with her, so that she doesn't have to prostitute herself, at least for this evening. He escorts her home and looks for her the following day, eventually accompanying her on the ride to the remote village where her family lives. 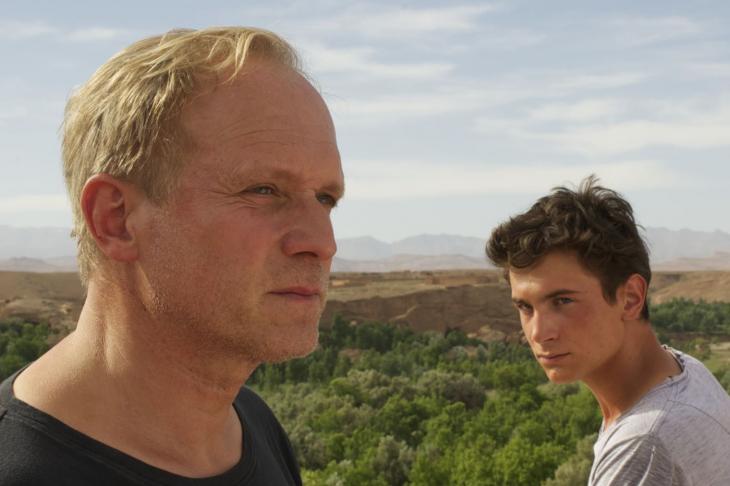 "Astonishing insights": With "Exit Marrakech", director Caroline Link demonstrates a sensitivity to Morocco – the beauty of its landscape, the social diversity, and the country's cultural wealth, as well as for its social extremes and contradictions, according to Christoph Leisten

His actions may be motivated by his youthful inexperience, yet, at the same time, they clearly express an openness toward those who are totally "other". This is in marked contrast to his naively lethargic father, left back in Marrakesh. After Heinrich finally discovers the location of his son, the two manage to draw nearer to each other during a road trip through the Moroccan landscape. This rapprochement is, in no small measure, equally due to his son's lack of inhibitions as to the Moroccan culture of hospitality and willingness to help.

Incorporating Moroccan culture and its people's

And as for the Moroccan aspect of this exceptionally successful film, the most remarkable thing is the way in which Caroline Link incorporates Moroccan culture and its people's way of life into the scenario. The insight of the director is all the more astonishing – and for German films extremely unusual – in the way that she expresses respect, esteem, and an openness for the "other", here to be found in Maghreb culture.

It is this fundamental stance that allows the images in this film to unfold with such acute precision and intensity. With "Exit Marrakech", Caroline Link demonstrates a sensitivity to Morocco – the beauty of its landscape, the social diversity, and the country's cultural wealth, as well as for its social extremes and contradictions. 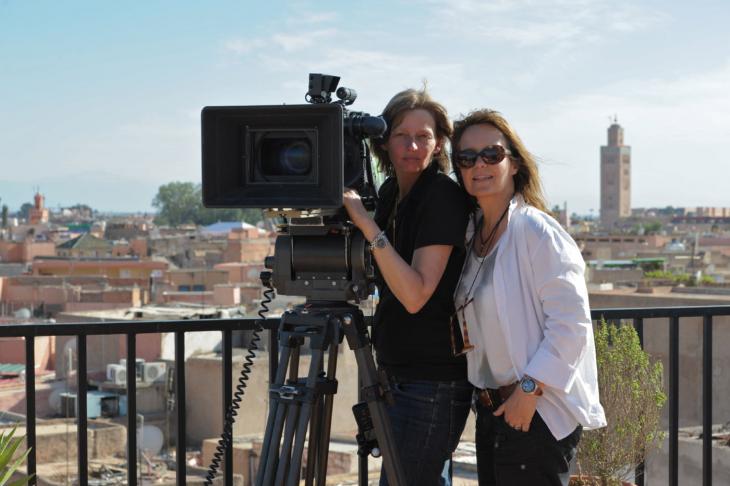 Caroline Link (right), seen here with her director of photography Bella Halben, is one of the most critically acclaimed German directors. She was awarded an Oscar for "Nowhere in Africa" and nominated for an Oscar for "Beyong the Silence", both in the category "Best Foreign Language Film"

In what is perhaps the greatest achievement of the film, the camera lens never lets the audience forget that the story is seen from a European gaze, from the viewpoint of a guest. The film attempts to be open and understanding. It aims to draw near, but at no time wants to impose solutions to phenomena that can only be overcome internally, by Moroccan society itself. In light of all this, the director not only devotes great attention to her protagonists, but also to all of the minor characters, who grace many scenes in the film with a profound touch.

Sometimes, they only appear briefly in a scene, such as the hungry beggar, who desperately knocks on the window of a restaurant, the young poet, who wrote a gay romantic novel, the strict, patriarchal father of Karima, and her younger sister, overcome with fear of the foreigner. With her delicate and precisely placed images, Link offers her viewers a kaleidoscopic portrait of a society marked by huge economic and ideological differences – and one that is unmistakeably caught up in a process of transformation.

Yet, this is clearly a transformation that does not erase Moroccan cultural identity. Many Western films employ the call to prayer by the muezzin as a metaphor for a threat. Caroline Link takes a completely different stance. In one of the five scenes of the film in which the call to prayer can be heard, a desert guide translates the call for Ben word for word in English. German audiences are provided with subtitles. Such is the portrayal of religious identity in a globalized world.

While Heinrich and Ben manage to find reconciliation, the fate of Karima, whose father has for the time being banished her from the family home on account of the visit by the foreigner, remains unresolved. It is not a matter for the director to settle. This approach is one that would most certainly be criticised by those constrained by a sense of rigorous moral absolutism, namely, those who believe they have a ready-made solution for everyone. And we cannot thank Lessing enough for showing us the extent to which such moral absolutism is prepared to act. Caroline Link's fabulous film creates a space in which we can come to better understand the totally "other". More can hardly be expected from a work of art.

Germany is often lauded for its atonement for its Nazi past. Yet the country upheld the structures that allowed – and allow – racism to flourish and Germanness to be intertwined ... END_OF_DOCUMENT_TOKEN_TO_BE_REPLACED

Five years after the Joint Comprehensive Plan of Action was concluded, it is on life support, following the US's reinstatement of sanctions and Iran's return to enrichment ... END_OF_DOCUMENT_TOKEN_TO_BE_REPLACED

Mikhal Dekel’s father was part of a contingent of Jewish children who went on an odyssey from Poland to Iran as a result of the Holocaust. Dekel has now written a book exploring ... END_OF_DOCUMENT_TOKEN_TO_BE_REPLACED

The protests against police violence in the USA have triggered a discussion in Germany about discrimination, immigration and the country's image of itself. Why are people who do ... END_OF_DOCUMENT_TOKEN_TO_BE_REPLACED

Journalist Michel Abdollahi was born in Tehran in 1981 and moved to Hamburg in 1986. His big breakthrough came with his television documentaries on social issues such as ... END_OF_DOCUMENT_TOKEN_TO_BE_REPLACED

END_OF_DOCUMENT_TOKEN_TO_BE_REPLACED
Social media
and networks
Subscribe to our
newsletter