Cartoons hold up the mirror to society. In the Arab world as well, cartoons are a popular medium for criticizing the government and society. Liesel Schulze-Meyer reports on an exhibit of Maghreb cartoons.

Cartoons hold up the mirror to society. In the Arab world as well, cartoons are a popular medium for criticizing the government and society. Liesel Schulze-Meyer reports on an exhibit of Maghreb cartoons shown last year in Berlin, organized by the Friedrich Ebert Foundation and the German-Maghreb Society. 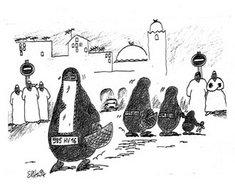 Women in Afghanistan – identified by license plates, cartoon by the Algerian cartoonist Dilem

​​"Work hard at school so you can be as smart as my Prime Minister someday", the president admonishes a little schoolboy. The boy replies: "I'd rather not go to school, then I can become president like you."

Nothing is sacred to Algerian cartoonists. This was clearly demonstrated by an exhibit of a hundred political and socially critical cartoons from the Maghreb countries Libya, Tunisia, Algeria and Morocco in Berlin last year.

Libya was represented in Berlin by the artist Muhammed az-Zwawi, who is very popular in his homeland, Tunisia by Chedly Belkhamsa, known and loved for his contributions to the daily press.

Morocco, which has a professional cartoonists' organization, contributed works by eight artists, including some by the organization's chair, Mohamed Nadrani. 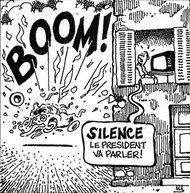 "Quiet, the president is about to speak!"

​​A bomb explodes next to a house, car parts fly through the air. Through an open window we see a man sitting in front of a television; not seeing the disaster, he yells out the window: "Quiet, the president is about to speak."

The Algerian French-language newspaper Liberté prints a cartoon under the heading "Le Dilem du jour" on the last page of each edition. Dilem is probably the country's most popular cartoonist, and every day readers are eager to see what he will tackle this time, what scandals his bulbous-nosed characters will expose.

Cartoons provide not only information, but above all wit and humor. And who doesn't like to laugh or chuckle, who doesn't relish nastiness, who can avoid gloating when deplorable situations are made fun of, who isn't happy to agree when the famously sharp pen skillfully skewers abuses?

No lack of issues

State and administrative incompetence, election fraud, corruption, human rights abuses, Islamic fundamentalism, terror, violence, the oppression of women, restrictions on press freedoms: Maghreb cartoonists have a wealth of issues to get worked up about.

When foreign policy or a critique of other countries is involved, cartoonists usually choose to visualize relations with the west, above all America, the Middle East conflict, events in Afghanistan and Iraq and the politics of oil.

Of the four countries represented, only in Algeria is there open criticism of the state, the parties and the military. However, in contrast to Germany artists rarely depict real, recognizable people.

In Libya it seems possible to criticize the People's Committees mildly, while America, Saudi Arabia, and Israel, for example, can be criticized openly.

In Libya, bootlegging and alcohol smuggling is flourishing – cartoon by Muhammed az-Zwawi

​​In their loving detail, az-Zwawi's drawings are also a closely-observed portrait of the people and their way of life; with pen and brush he exposes people's peccadilloes, major and minor, the plight of the poor and the vices of the rich or the incompetence and injustices of the administration.

He makes fun of the country's prohibition of alcohol, and of antiquated marriage customs. One strong cartoon addresses the veiling of women, depicting photographs of three completely veiled figures. Each holds up a sign saying: "I am Haluma … and I am Mabruka … and I am Fatuma".

​​In Morocco (as in Algeria), press freedom is a highly important issue. Its abuse is often symbolized by mistreated pens: pens forming prison bars, pens being executed, pens with crutches or in handcuffs. A newspaper in chains is guarded by a prison guard with a gun.

Moroccan cartoonists are more serious than the others. Torture, the dangerous escape to Europe over the Straits of Gibraltar, violence against women – these, they feel, are not necessarily laughing matters. Although psychologists tell us that laughter is therapeutic even in the face of horror, because it helps us free ourselves from fears.

The Tunisian cartoons take the fewest political risks, tending to thematize traffic problems in a capital that is bursting at the seams, as well as its unattractive architecture.

Cartoon by Chedly Belkhamsa from Tunisia

​​Environmental problems, soccer dealings, the battle of the sexes, new kinds of children's games – these are some of the issues addressed by Chedly Belkhamsa. He offers a cautious criticism of the lack of press freedom in the form of a dripping faucet in the shape of the word "info".

Since the 18th century, when English cartoonists gave cartoons the form we are familiar with today, they have been regarded as a comical mirror of society. Ever since, their exaggerations, distortions of appearances, their emphasis of ugliness, their sarcasm and malice and their exposure of grievances have given them broad popularity.

The Maghreb cartoonists stand well within this tradition. They reflect Maghreb society with all its peculiarities, flaws and shortcomings. The depiction of people's distinguishing features and environments is usually typically North African.

As elsewhere, styles differ, ranging from the crude, economical line drawings of Melouah to Dilem's nervous style with its delicately filled-in areas and the graphically sophisticated, in part colored images of az-Zwawi.

How far can cartoonists go with their issues their images address? Sid Ali Melouah and Mohammed Nadrani were present at the exhibit in Berlin, two artists whose biographies show how dangerous courage can be. The former had to leave Algeria after Algerian terrorists repeatedly threatened his life, while the second spent years in prison.

As a tourist in Tunisia, Az-Zwawi was even imprisoned for months without being given a reason. Dilem was sentenced to pay a fine and spend several months in prison.

When Melouah showed his Algerian cartoons in other Arab countries, people often asked him in astonishment how it was possible for the Algerian press to have so much freedom and openness. He would always reply: "We don't have the freedom. We just take it!"

END_OF_DOCUMENT_TOKEN_TO_BE_REPLACED
Social media
and networks
Subscribe to our
newsletter