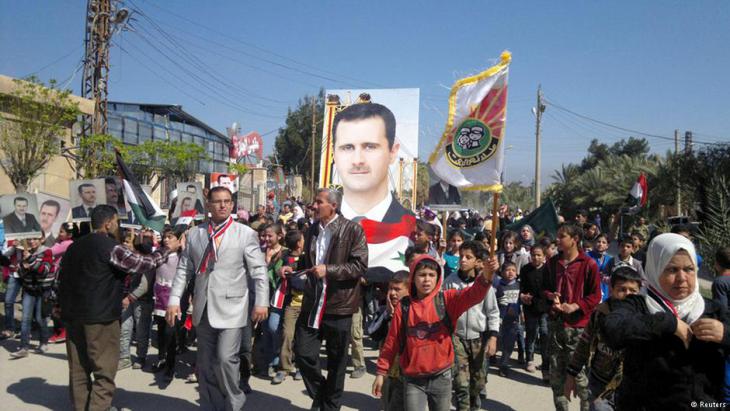 Millions of Syrians are facing dispossession. Former rebel territories and the homes of those who have fled are being handed over to Assad loyalists. By Mostafa Al-Shimali

When Amira Ali (not her real name) fled her home in Homs with her family in 2011, she left everything that meant something to her behind: her books, her clothes. And the big red teddy bear her boyfriend had given her on her birthday the year before. "We thought we would be returning soon," says Ali.

Today the Ali family lives in Baden-Wurttemberg. Amira and her boyfriend got married and want to stay in Germany. But her parents want to return to Syria as soon as the war is over. In Homs, even more so than elsewhere, the battle between the regime and the rebels quickly turned into a sectarian war between Assad's loyal Alawi and the Sunnis living there. The Alis are Sunnis but lived in Zahra, a predominantly Alawite district. After the family left its home, it was confiscated by a local Assad-loyal militia. The fighters plundered the belongings, cleaned out the house – and handed it over to an Alawite family.

Amira Ali's father tried to get the house back. He sent his brother to negotiate with the new residents. "They said they would speak only with the rightful owners," says Ali. Her father even contacted a lawyer in Damascus. However, due to the new regulation signed into law by President Bashar al-Assad on 2 April, Ali's family fears they may lose their claim to the house.

Millions of Syrians threatened with dispossession

"Law Number 10" is the most recent step taken by the regime to shape the future of Syria according to its own plans. The law lets the government declare any area of the country to be a building zone, in order to then re-develop it. Once an area has been thus designated, home-owners have one month to prove their ownership to the authorities. Otherwise, their house becomes the property of the state and can be publicly auctioned off. The law thus harbours the potential to dispossess millions of Syrians. 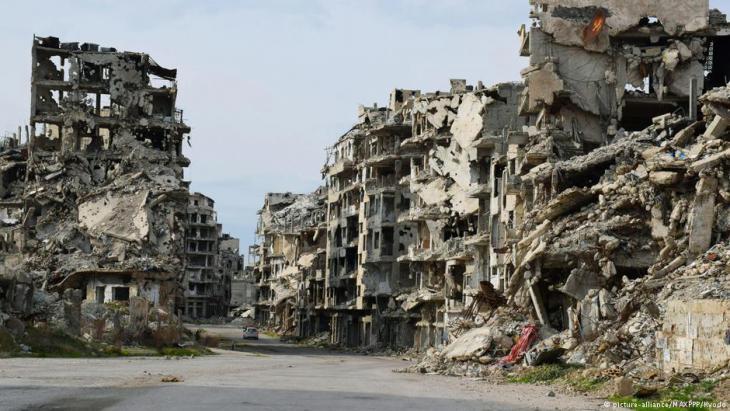 Carte blanche to re-structure and dispossess: Law Number 10 allows the government to declare any area of the country as a building zone, in order to then re-develop it. Once an area has been thus designated, home-owners have one month to prove their ownership to the authorities. Otherwise, their house becomes the property of the state and can be publicly auctioned off

"Law Number 10 gives the regime free rein to re-structure every region of Syria," says Hamidi al-Hajji Hamidi from the Association of Independent Lawyers, located on the western outskirts of Aleppo, an area under opposition control. "The law particularly focusses on those associated with the opposition. It is a crime against all Syrians who were either driven from their homes or fled in fear of their lives."

Twelve million Syrians – more than half the population – have left their homes since the war broke out in 2011, seeking refuge inside or outside the country. Although Syrians abroad can authorise their relatives in the country to deal with the authorities, the family members need to present for them a certificate of good conduct from the police in order to claim possession. And those with ties to the opposition, and/or who took part in demonstrations against Assad in 2011, will hardly be able to obtain such a certificate.

"How are my parents supposed to submit their papers to the local administration when they're in Germany?" asks Amira Ali. She could send her uncle, who still lives in Syria, but he is afraid of potential reprisals if he asks about his relatives' home.

The regime decided years ago how and for whom Syria would be rebuilt – at a time when many still believed that Assad's regime would soon fall.

Basateen al-Razi – "Razi Woods" – was a simple working-class neighbourhood in the southern part of Damascus before the war. During the 2011 uprisings, its inhabitants openly supported the opposition. In July 2012, young men from al-Razi fighting under the banner of the Free Syrian Army drove out the government forces – yet the latter were able to retake the district the very next day. Those who had participated or fought in the demonstrations fled. Two months later, Assad signed Decree 66, which created two zones for new construction projects in the southern area of Damascus. One of those zones includes Basateen al-Razi.

A report broadcast in March 2016 by a television station loyal to the regime showed President Assad in Basateen al-Razi standing in front of a large concrete block. He was spreading mortar and laying a brick – as symbolic cornerstone for a gigantic construction project called "Marota City", a planned community with restaurants, schools, a mall and luxurious high-rises for 60,000 future residents. The investor group Damascus Cham Holding was established by the Damascus city government expressly for this project. One of the partners is Rami Machluf, one of Syria's most influential businessmen and a cousin of President Assad.

Few of the inhabitants of the former workers' district Basateen al-Razi will be able to afford to live in Marota City. The original quarter was completely demolished – only the mosque was left standing, says Ahmad (not his real name), a former resident who now lives in the Netherlands. Some people have moved, others have left Syria, he adds. "Those who willingly gave up their homes received compensation. Those who refused still had to get out – and got nothing in return." 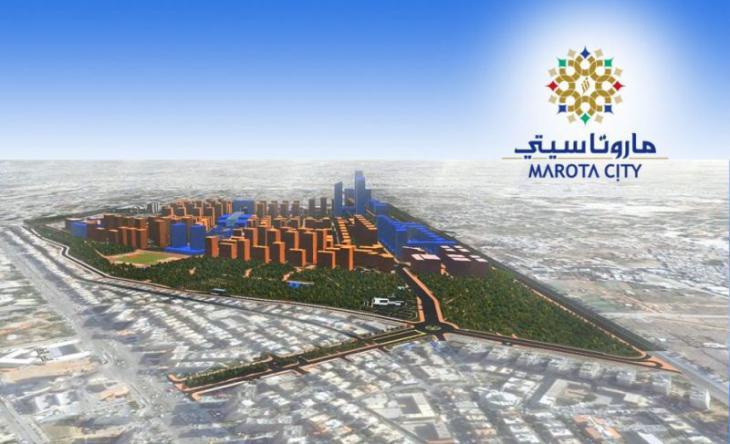 Mirroring the Assad clanʹs own penchant for glamour: Marota City is a planned community with restaurants, schools, a mall and luxurious high-rises for 60,000 future residents. The investor group Damascus Cham Holding was established by the Damascus city government expressly for this project. One of the partners is Rami Machluf, one of Syria's most influential businessmen and a cousin of President Assad

The supposed aim of Decree 66 is to enable the government to re-develop areas that began as informal settlements. Around forty percent of the houses in Syria were originally built illegally – mostly by people who had moved from the country to the city from the 1960s onwards, building outside the official construction zones.

Decree 66 at the same time gives the regime a way to expel adherents of the opposition or to prevent them from returning. And not only critics have pointed this out. In 2012, Ibrahim Ghalawanji, at the time minister for local administration, declared that Decree 66 was "the first step towards rebuilding illegal settlements, especially those that became the target of armed terrorists. We want to rebuild these houses to high development standards."

The regime wants a loyal population

The Syrian government describes all those critical of the regime as "terrorists". Even back in 2012, it was plain to see what the government had in mind for its land use planning: a Syria in which the regime can be sure of the loyalty of its people.

Other projects similar to Marota City are also in the pipeline. In May 2015, the regime passed Decree 19, which allows local authorities to establish real estate companies for the development of urban districts, as happened in the case of Basateen al-Razi.  In March 2017, such an investor group was founded in Homs to redevelop the former opposition district Baba Amr. Studies are also underway on the possible re-development of the area between the eastern outskirts of Damascus and the Harasta district in the province of Eastern Ghouta.

In some parts of Syria, people have been ousted from their homes without any legal basis. Former residents of the cities of Majadin and Abu Kamal in eastern Syria are forbidden from returning, says activist Aghiad al-Cheder, who grew up in Abu Kamal, but now lives in Germany. These cities are controlled by Assad-loyal Iraqi and Iranian militias, he says: "The inhabitants who had to flee the 'Islamic State' during the fighting are now living in the desert and are not being allowed to return to their homes."

Abdelkarim Halabi is an activist from the formerly besieged eastern section of Aleppo who now lives in Turkey. Halabi says that his relatives tried to move into his house in Salah al-Din. But at the border checkpoint for the district they were interrogated by the militias and refused entry. He learned from former neighbours that other people are now living in his home.

Meanwhile, construction work has begun in Basateen al-Razi near Damascus.

Musicians from Morocco to Iraq have been crossing paths at the Oriental Summer Academy in south-western Germany for ten years. Matthias Wagner, who founded and directed the ... END_OF_DOCUMENT_TOKEN_TO_BE_REPLACED

The Human Rights Film Festival Berlin has been held for the third time in 2020 under the patronage of Nadia Murad. In just a short time, this festival, which was initiated by the ... END_OF_DOCUMENT_TOKEN_TO_BE_REPLACED

The rise of liberation movements in the Arab World during the 20th century brought with them an array of complimentary works from the creative sector. Sultan Sooud Al Qassemi ... END_OF_DOCUMENT_TOKEN_TO_BE_REPLACED

Ronya Othmann's novel "Die Sommer" (The Summers) tells the story of Leyla – the daughter of a German and a Yazidi Kurd – who visits her grandparents' Yazidi village in northern ... END_OF_DOCUMENT_TOKEN_TO_BE_REPLACED

In the first case of its kind anywhere in the world, a German court is probing Syria's state torture system. Giving testimony at the trial is one of Syria's most widely respected ... END_OF_DOCUMENT_TOKEN_TO_BE_REPLACED

Political scientist Hugo Micheron on the origins of Islamist terrorism in France, his conversations with jihadists – and on the trial now beginning against the perpetrators of the ... END_OF_DOCUMENT_TOKEN_TO_BE_REPLACED
Author:
Mostafa Al-Shimali
Date:
Mail:
Send via mail

END_OF_DOCUMENT_TOKEN_TO_BE_REPLACED
Social media
and networks
Subscribe to our
newsletter