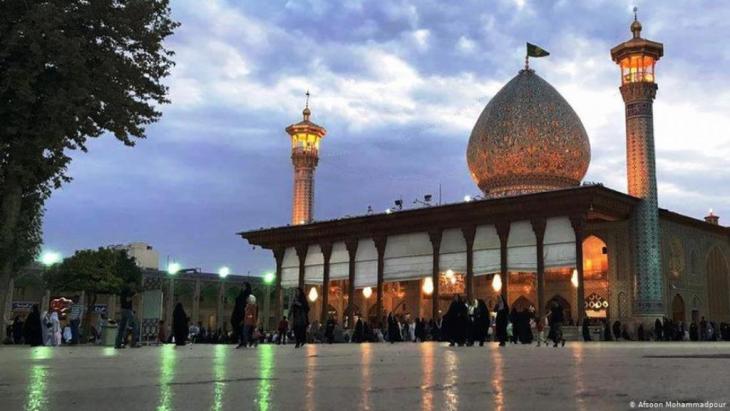 Caught between tradition and modernity
Will ancient poet Hafez win the "soft war" in Iran?

Iran is far more modern than many people realise: our view is clouded by media distortion and the overriding political narrative. The nation’s historic and cultural riches are often overlooked. A declaration of love for Iran by Marian Brehmer

Hafez couldn’t have chosen a more pleasant final resting place. Delicate mandarin trees surround the eight-pillared tomb of the poet in the southern Iranian city of Shiraz. A nightingale sings against the evening sky. The sparkling mosaic that covers the structure is reflected in a pool of water, while the warm air is filled with the gentle strains of lute music piped over loudspeakers.

Fans of the national poet occupy the steps in front of the white marble sarcophagus: groups of students, a loved-up couple, families with girls in jeans and grandmothers in black chadors. Someone has scattered dark-red rose petals over the sweeping lines of the calligraphic epitaph.

It is as though scenes from Hafez' poetry have become a reality. Most of the pilgrims carry with them a copy of his "Diwan" – that famous collection of hundreds of poems first translated into German by the Austrian orientalist Joseph von Hammer-Purgstall in 1812.

For more than 600 years, Hafez' verses have been a place of refuge for Iranians. An oracle to answer difficult questions, an encrypted guidebook, a trusted home in uncertain times. Most Iranians' first encounter with Hafez would have been a bedtime story read to them by their grandparents. He’s regarded as master of the metaphor and keeper of all secrets – there are few Iranians who have not grown up immersed in his poetic imagery.

My first visit to Iran almost 10 years ago left an indelible impression. Captivated by my warm encounters with Iranians and their culture, I developed the almost messianic habit of explaining to friends in Germany that Iran was not at all how they always imagined it to be. What may now sound rather platitudinous to YouTubers and seasoned travellers of Iran, was at the time still something of a revelation. 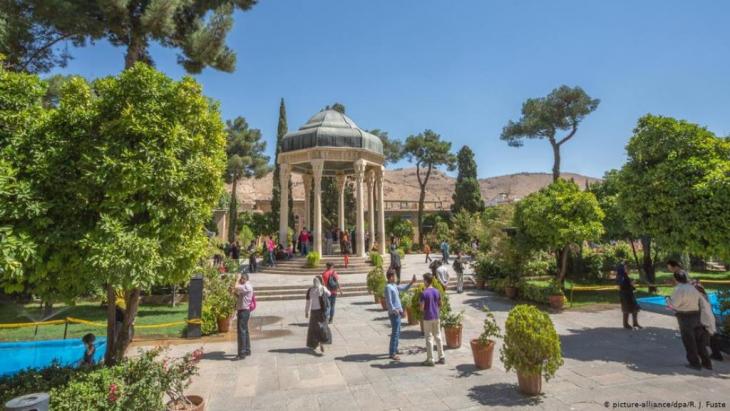 "The mood in the Hafez garden in Shiraz contrasted starkly with the diet of fist-pumping zealots, flag burners and badgering potentates served to us on our television screens from Iran," writes Brehmer in his declaration of love for Iran and its people

The mood in the Hafez garden in Shiraz contrasted starkly with the diet of fist-pumping zealots, flag burners and badgering potentates served to us on our television screens from Iran. "Did you know that every day, hordes of young Iranians read out poems in Hafez' mausoleum?" I would always ask whoever I happened to be talking to. There followed a comparison devised by me to hammer home the point. "That’s the same as young Germans streaming to Weimar to Goethe’s tomb to read to each other from 'Faust'."

Even before the coronavirus pandemic, Iran’s year didn’t get off to a good start. In January, the Iranians had to read a Tweet that made them sick to their stomachs – and not just them. In the spat between America and Iran, President Donald Trump threatened to destroy 52 Iranian cultural sites if American soldiers were harmed in Iranian attacks.

UNESCO protested. I too could hardly believe it. We were familiar with Trump’s tirades by then, but in the heat of the exchange, for a brief moment even an act of madness such as this seemed possible. What if the American President had acted on his threat? If Hafez’ tranquil garden had been bombed to smithereens?

Trump’s comments struck a raw nerve with a civilized nation that has already suffered for years under sanctions and the threat of war. Then came the corona crisis on top of that. Iran was the first nation in the Middle East to be struck by the pandemic. It was also the hardest-hit country in the region. With more than 25,000 corona deaths (more than twice the number in Germany) it continues to be the epicentre of the region.

Thus, the Persian New Year in March got off to a bleak start. But Iran deserves so much better. With the warmth and hospitality of its people, the diversity of its regions and the profound mysticism in the lines of poets such as Rumi, Iran had touched my heart.

Following my first trip to Iran, I decided to pursue a course in Iranian studies. I crammed Persian vocab at a fusty Berlin institute. Speaking Farsi was the most important gain from an otherwise rather dry philological course.

In the autumn of 2013, I spent a semester in Tehran. While I was there, my Persian progressed so well that I was eventually able to attend a course on classical poetry. This opened my eyes to the very same aesthetic realm that had once enthused Goethe. In the "West-Eastern Diwan", he wrote in honour of his Persian poet forefather: "Ah, let the whole world slide and sink! / Hafez, with thee, with thee alone / The strife of song I seek!"

Home
Print
Newsletter
More on this topic
Professor Nasser Kanani on the Persian poet Hafez: "The joyful audacity of his spirit, the melody of his poetry"Iran′s image in the West: Sheer incredulity″City of lies. Love, sex, death and the search for truth in Tehran″: Where nothing is allowed, yet anything is possibleThe longest duel: Iran and the USA square off
Related Topics
Ayatollah Ali Khamenei, History of the Near and Middle East, Iran conflict, Iranian cinema, Iranian clerics, Iranian literature, Iranian opposition, Islamic Revolution of Iran, Mysticism | Sufism, Shia Islam | Shiite Muslims, Sunni-Shia tension, Travel, Travels in the Orient, U.S. policy in the Middle East
All Topics

The Kurds are under attack from two sides: from Turkey, and from Iran. The situation in their territories in northern Iraq is becoming increasingly desperate. Birgit Svensson ... END_OF_DOCUMENT_TOKEN_TO_BE_REPLACED

Iranians do not want an Islam that interferes. They are fed up with a system that manipulates people with simple promises of salvation and anti-Western propaganda. Islamic ... END_OF_DOCUMENT_TOKEN_TO_BE_REPLACED

"The Voice of Dust and Ash" draws us into the life and times of Iranian maestro Mohammad Reza Shajarian with passion and joy, focusing on the man who stood, and still stands, for ... END_OF_DOCUMENT_TOKEN_TO_BE_REPLACED

November 2022 sees the Arab world firmly in the spotlight with the COP27 in Egypt and the FIFA World Cup in Qatar. Public trust in MENA governments is weak, thanks to their ... END_OF_DOCUMENT_TOKEN_TO_BE_REPLACED

In Iran, two famous actresses, Hengameh Ghaziani and Katayoun Riahi, were arrested recently. These days anyone who shows solidarity with the protesters is a target to be silenced ... END_OF_DOCUMENT_TOKEN_TO_BE_REPLACED

With the current leadership of Iran quick to lay the blame for the Iran protests on Israel, the chances of harmonious relations between the two countries still seems remote. Yet, ... END_OF_DOCUMENT_TOKEN_TO_BE_REPLACED
Author:
Marian Brehmer
Date:
Mail:
Send via mail

END_OF_DOCUMENT_TOKEN_TO_BE_REPLACED
Social media
and networks
Subscribe to our
newsletter