Skip to main content
Censorship of Online Media in Syria

The Syrian State not only influences the press, but is also increasingly trying to wield control over the Internet. One of the reasons is the regime's fear of the growing influence online media and the resulting loss of control. A report by Kristin Helberg from Damascus 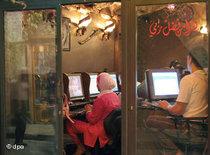 Under general suspicion: since in Syria, as elsewhere, the Internet eludes total state control, the administration relies mostly on psychological tactics

​​Despite a trend toward liberalisation during the past few years, Syria's media landscape is still modest in scope. In addition to the state-run news agency, SANA, and three official daily papers, there are some private print media, but few with a political orientation.

The same goes for private radio and television stations, which serve primarily for entertainment rather than as forums for critical reporting. The Internet could therefore potentially be an important source of information in Syria, were it not for the Damascus government's concerted efforts to prevent that from happening.

Online journalists are censored, bloggers end up in jail, and anyone entering an Internet café first has to show ID. But although the law requires anyone using an Internet café to register their name and ID number, each café handles this procedure differently.

Exceptions to the rules

While in the university quarter of Damascus signs in the windows of Internet cafés notify potential customers of the registration requirement and staff monitor which websites a "suspicious" customer calls up, café operators in areas where diplomats live or in the Old Town with its many tourists rarely ask to see ID.

"The idea is to monitor especially students, university graduates and other young people", says Mazen Darwich, director of the Center for Media and Freedom of Expression in Damascus. At the beginning of May, the Center published a new study on the Syrian media landscape that reveals stepped-up monitoring and censorship of online journalism.

Since in Syria, as elsewhere, the Internet eludes total state control, and those with the right technology in hand can easily circumvent the blocks put on certain sites, the administration relies mostly on psychological tactics, Darwich explained. 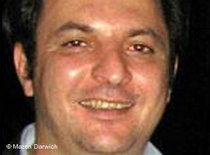 "The idea is to monitor especially students, university graduates and other young people", says Mazen Darwich, director of Center for Media and Freedom of Expression in Damascus

​​Measures such as the registration of Internet café customers are more suitable for breeding insecurity than as truly effective means of surveillance. "If I want to open a banned website, but have just registered my data at the door, I will of course be afraid and think twice about doing so", says Darwich.

The media expert views the judgements pronounced on five Internet activists, who are now serving terms of several years, in the same light. In the most recent case, the Damascus Criminal Court sentenced author Habib Saleh to three years in jail in early April, already the third imprisonment during the last nine years for the 61-year-old.

The charges are always the same, Darwich emphasises, ranging from "disseminating false information" to "weakening national sentiment and defaming the President" all the way to "inciting ethnic and religious conflicts". These allegations undermine the right to freedom of expression set down in the Syrian constitution.

According to the Media Center's director, the regime has made an example of the five activists as a way of compelling Syrian bloggers and online journalists to develop a kind of self-censorship.

Summoned before the Secret Service

Syrian journalist Bahia Mardini is trying to prevent the success of what she views as the "worst form of censorship". The 39-year-old has written for years for the London-based website "Elaph", one of the many news portals that are forbidden in Syria.

The Ministry of Information has yet to grant Mardini accreditation, meaning that she does not possess a Syrian press pass. Like many of her colleagues, she must regularly appear before the Secret Service.

The last time she was summoned, the journalist recalls, she was questioned about a news piece on the problems of the Kurds. "They told me I shouldn't have published the piece, and I replied 'But it was true, as confirmed by three sources'", Mardini remembers. Then she drank her coffee and left.

The security officials' intervention in the work of Syrian online journalists goes even further though, reveals Mazen Darwich. Once, almost all Syrian news websites reported on the Media Center's activities, notes Darwich. But then the Secret Service started putting pressure on their editors.

"They were told not to publish anything having to do with our Center anymore", says the activist, speaking of "daily interference" in the editorial work on the websites. "Friends tell me that the security officials sometimes phone up only minutes after a news item has appeared on the Web and criticise it as imprecise or containing sensitive material", Darwich reports. The Secret Service has thus virtually become a member of the editorial teams.

Behind this crackdown is the regime's fear of the growing influence of the Internet and the resulting loss of control, in the opinion of the 35-year-old. The number of Syrian Internet users has seen a meteoric rise in the past few years, Darwich says, with almost one out of every five Syrians now regularly spending time online.

​​Most of them use the Internet from home and dial in via their private landline. In view of the living conditions and close family ties in Syria, we can assume that four to five people share each Internet connection. And anyone who doesn't want the commitment of fixed monthly costs can surf the Web with an inexpensive prepaid card.

Interestingly enough, these developments can be traced in part to Syrian president Bashar Al Assad's promotion of technology, including making the Internet available to the wider public upon taking office in 2000.

Assad's government propagates a modern and open Syria, but one that does not voice critical overtones concerning domestic policy. In its May 2009 report, the Center for Media and Freedom of Expression counts more than 230 blocked websites.

Journalistic standards lacking in many cases

Correspondent Mardini gives some of the blame to the journalists, however. Many websites do not take their work seriously, she says, lamenting "chaos on the Web". "Each journalist here makes his or her own homepage, but many are similar, copying news items from each other or helping themselves to the material available from news agencies or in newspapers, and not adding anything original", Mardini criticises.

The fact is, however, says the "Elaph" correspondent, that professional journalism is especially important in a country like Syria as a way of strengthening the authorities' trust in the media.

She believes that those who do their own careful research, who don't exaggerate and who write objectively get into less trouble with the Secret Service and can expand the scope of reporting step by step. "We always dreamt of a Syrian newspaper reporting on the trials held before the State Security Court", the journalist remarks.

That was once unthinkable, but today it's a reality. "This means that things are changing, and it's up to us journalists to build on this freedom by working conscientiously and correctly", Mardini underlines.

Satellite Channels Targeted
Arab Freedoms Desert the Screen
The Arab ruling elites like to talk a good democracy – but talk is about as far as they get. Rather than advancing the cause of democracy their actions have been directed towards curtailing the newly won freedoms of the media. Amr Hamzawy reports on the Arab regimes' attempts to gag the media nuisance

Media in Syria
Restricted Scope
Despite the announcement of reforms at the Baath Party conference in Damascus in early June, hopes of liberalisation in Syrian media policy received a clear setback when the prime minister decided to withdraw the licence of the weekly paper al-Mubki. Götz Nordbruch reports

Blogging in the Arab World
Lessons in Democracy
Blogs serve an important function as platforms for independent reporting, especially in the authoritarian states of Northern Africa, where controversial debates are often excluded from political life. Alfred Hackensberger reports