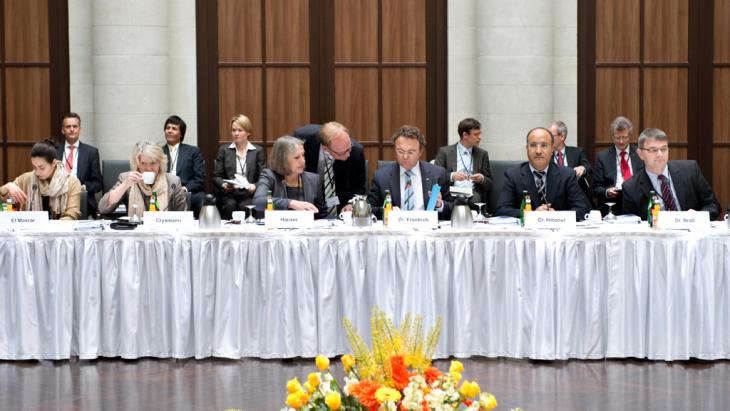 Since the row that erupted at last year's Islam Conference, dialogue between the German state and its Muslim residents has faltered. Now, the new interior minister, Thomas de Maizière, wants to get things moving again by changing the forum's orientation. But what can the German Islam Conference realistically hope to achieve in the future? By Ulrike Hummel

Anti-Muslim sentiments in mainstream society, negative, prejudice-laden images of Islam and a series of crude theories and inflammatory comments made by critics of Islam. These are just a few of the urgent problems shaping everyday interaction between Muslims and non-Muslims in Germany.

However, since the German Islam Conference (DIK) was set up by Wolfgang Schäuble in 2006, positions within society have actually become more entrenched. So what has the dialogue between Muslims and the state achieved thus far? "The really big successes of the Islam Conference came in the initial period, under the aegis of Wolfgang Schäuble," says Islam scholar Michael Kiefer. According to Kiefer, a milestone was reached during this phase, namely the laying of the foundation stone for the introduction of Islamic studies in schools.

But since the fraught sessions of last year's conference at the latest, the dialogue conference has remained at a standstill; indeed critics are even describing the situation as a shambles. "The Islam Conference failed because home affairs politicians and constitution protection authorities stipulated whom it spoke to and whom it didn't speak to," says Kiefer. The last conference, which was led by the interior minister at the time, Hans-Peter Friedrich, showed that the de facto exclusion of Milli Görüs meant that not all Muslims were sitting at one table any longer, he adds.

Not all Muslims are represented

The issues of crucial importance to Germany's Muslims are determined primarily by association functionaries who are conservative in their orientation. "The Islam Conference was always a showcase event for both sides," says Lale Akgün of Germany's Social Democrats (SPD), adding that the conference has always been an ideal opportunity for incumbent interior ministers to show how tolerant they are, and for representatives of Muslim associations to stand alongside the interior minister once a year. 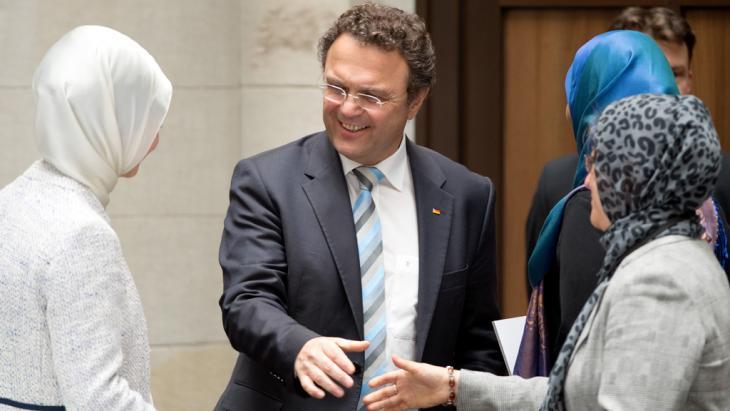 Focusing on the wrong priorities: Thomas de Maizière's predecessor, Hans-Peter Friedrich (CSU), came under fire for focussing too much on security matters. Ultimately, the Muslim associations complained that the format of the conference was no longer worthwhile

"A panopticon of people who are supposed to establish or advance Islam in Germany? No, I think the Islam Conference was only there to say 'we're doing something for the Muslims'," says Akgün.

Now Interior Minister Thomas de Maizière (CDU) is taking steps to sort out the 'shambles'. He seeks dialogue on an equal footing and plans to change the orientation of the Islam Conference.

Initial consultations with Muslim associations have already taken place: "Those discussions concentrated on content and how we can continue our dialogue in a forward-looking, goal-oriented fashion," said de Maizière.

The new concept will be unveiled by mid-March: the conference's objectives, issues-driven agenda and structure are to be freshly defined in a bid to "work together to achieve cohesion in our society," said the interior minister.

Once again, however, no heed is being paid to the fact that Muslims affiliated to an association are in the minority in Germany. The needs and sensitivities of a highly heterogeneous majority of Muslims are not being addressed even at this preparatory stage. This is partly due to the fact that from the government's point of view, there are no other potential participants to invite because Islam is, in principle, not organised.

"The Islam Conference should be laid to rest with dignity," says Lale Akgün. "There's absolutely no point in continuing with it, in issuing a remake." The Islam Conference may be getting a makeover, but the same orthodox association representatives are going to be sitting at the table just as they did in past years. "What can be expected from people who are currently pitting themselves against the only liberal theology professor in Germany, Mouhanad Khorchide?" says Akgün, adding that liberal Muslims do not feel represented by these people in any shape or form.

Muslim groups, however, welcome de Maizière's initiative and have expressed optimism following initial meetings. The interior minister invited a total of seven associations, including the Turkish Islamic Union for Religious Affairs (DITIB), the Association of Islamic Cultural Centres (VIKZ) and the Central Council of Muslims in Germany (ZMD). If the associations have their way, security policy issues should be addressed on the sidelines of the event, if at all, while the main focus should be on issues such as the recognition of Islam as a statutory body under public law.

But how can the social coherence of people from different cultures and religions be promoted? How can an image of Islam that does justice to a peace-loving religion be conveyed to the majority society without the usual negative connotations? Can a newly re-oriented Islam Conference help everyone living in Germany to pull together, free of prejudices and fear of "Islamisation"? No, it cannot. 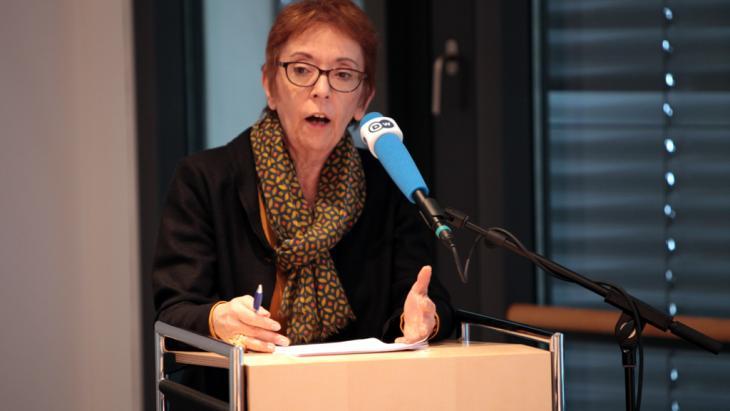 Harsh criticism of Germany's Islam Conference: "A panopticon of people who are supposed to establish or advance Islam in Germany? No, I think the Islam Conference was only there to say 'we're doing something for the Muslims'," says Social Democrat Lale Akgün

"People need to understand that questions of co-existence need to be addressed at federal state and municipal levels," says Michael Kiefer. He goes on to say that many federal states have reacted to this fundamental situation: the city states of Hamburg and Bremen have signed treaties with Muslims, and Lower Saxony is currently negotiating the terms of its own treaty. Preparatory talks are also taking place in other federal states, says Kiefer. "These are, for example, aimed at regulating the nature of the partnership in relation to Islamic studies in schools, the marking of religious holidays and what has to be done so that Islamic cemeteries can be opened."

New structures in the welfare sector

But what else can an Islam Conference achieve? What items should be put on the agenda as a way of contributing to constructive solutions in relation to co-existence? One of the major issues in coming years will be Muslim associations' funding of welfare institutions: residential homes for the elderly, Muslim pastoral care in prisons, pastoral care in the military and Muslim nursing care facilities, for example.

"The welfare sector, which employs well over one million people in the Federal Republic of Germany, is still structured in the same way as it was in the 1950s," says Kiefer. According to him, people have still not realised that another large religious community is living in Germany and that this community wants to provide religion-based social and welfare services in the same way as Caritas or Diakonie does. This will also involve state subsidies and public trusteeships. For this reason, it is likely that church representatives will be invited to the Islam Conference for the first time.

Critics of the dialogue event see at best only one chance for the conference, namely its political symbolism. But even this opportunity is moving in the wrong direction right now, says Lale Akgün. "This symbolic politics upgrades the orthodox associations that are not concerned with equality and who don't respect unorthodox, liberal Muslims."

Constructive symbolic policy-making must show the friendly face of Islam and make it clear that Islam can certainly keep pace with the modern age, she adds. "We need many more female teachers of Islamic studies, more qualified female imams and university theologians, who can convey a feminist view of Islam to society."

But the state, society and also many Muslims are nowhere near ready for such forward-looking symbolic policy-making. In just a few weeks, we will know which issues are set to dominate the dialogue between the German government and the nation's Muslim population. As for the guest list, we should expect little change there.

On 15 June, the "Islamkolleg" in Osnabruck officially launched its new training programme for imams in German. The college is intended to prepare Islamic theologians for their ... END_OF_DOCUMENT_TOKEN_TO_BE_REPLACED

For centuries, the great classical Persian author Hafez has inspired German writers. Translations, adaptions and homages have been created in his wake, and the process continues ... END_OF_DOCUMENT_TOKEN_TO_BE_REPLACED

Business in the Moroccan city of Tangiers is booming due to its location at the nexus of global trade routes. But many locals are failing to reap the benefits. What they crave ... END_OF_DOCUMENT_TOKEN_TO_BE_REPLACED

Morocco and the European Union are at cross purposes when it comes to the Western Sahara. And, as Germany does not support Moroccan claims to the territory, a major conflict has ... END_OF_DOCUMENT_TOKEN_TO_BE_REPLACED

Jewish voices are much more diverse than the public often sees. Jewish men and women who oppose the injustice of Israeli occupation in the West Bank deserve our respect and ... END_OF_DOCUMENT_TOKEN_TO_BE_REPLACED

They’ve already got the Louvre; they’ll soon have a Guggenheim Museum as well – and now the Emirates have added literature to their quest for cultural supremacy in the Arab world ... END_OF_DOCUMENT_TOKEN_TO_BE_REPLACED
Author:
Ulrike Hummel
Date:
Mail:
Send via mail

END_OF_DOCUMENT_TOKEN_TO_BE_REPLACED
Social media
and networks
Subscribe to our
newsletter