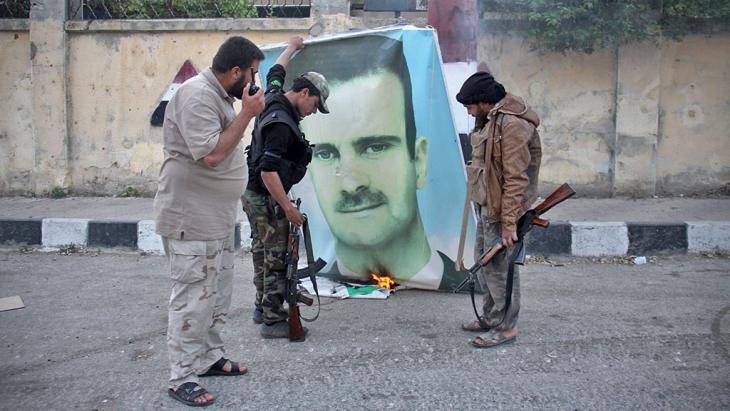 Charges against Bashar al-Assad
His turn will come

Six German lawyers are bringing a case against Syrian leader Assad for war crimes and crimes against humanity. It may sound naive, but it is a long-overdue step in international law enforcement – and Germany is the perfect venue. By Kristin Helberg

For years now, the Assad regime in Syria has been able to do whatever it likes – torture to death, starve, bomb hospitals and gas children – without fear of any consequences. Indicting the Syrian president on war crimes and crimes against humanity therefore sounds like an obvious idea that could have been had earlier.

But in the case of Syria, the limits of international law enforcement are becoming apparent. The International Criminal Court cannot step in, because Damascus does not recognise it and Russia and China would block any transfer to The Hague in the UN Security Council. Moreover so-called hybrid courts, in which national and international lawyers work together in an appropriate location (to date for example in Sierra Leone, Cambodia and Lebanon), require United Nations approval.

Now, a group of German lawyers has had enough of standing by and watching. Mehmet Daimaguler describes what is happening in Aleppo as "slow-motion genocide". He is one of six lawyers who have filed charges against Bashar al-Assad. The lawyers have collated 41 cases, incidents that occurred in Aleppo between 26 April and 19 November 2016. "We are limiting ourselves to these events, because they are especially well documented," says Daimaguler. 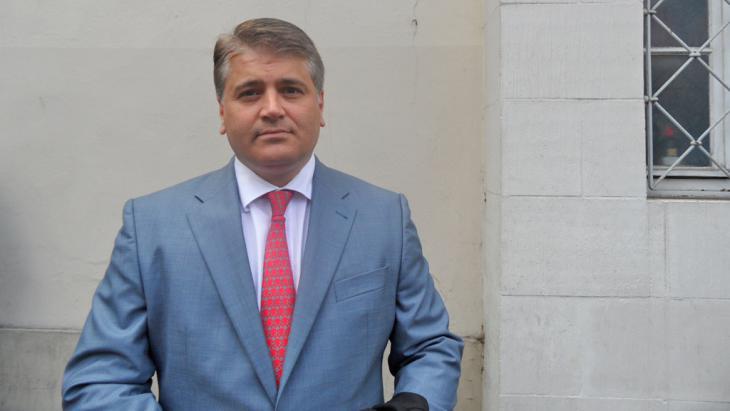 Mehmet Daimaguler describes current events in Aleppo as ″slow-motion genocide". He is one of six lawyers who have filed charges against Bashar al-Assad. The lawyers have collated 41 cases, incidents that occurred in Aleppo between 26 April and 19 November 2016

There is indeed a huge body of evidence for the atrocities being perpetrated in Syria. NGOs such as Amnesty International and Human Rights Watch regularly account for concrete cases of massacre and other war crimes. It is not only the regime that is to blame; all conflict parties in Syria are breaking international law. But Assad's violence is systematic; it is ordered, carried out and documented by official authorities. An entire state apparatus is concerned with the extermination of people – this explains the large discrepancies when it comes to the number of victims. The Syrian Network For Human Rights says that between March 2011 and November 2016, the regime was responsible for more than 92 percent of civilians killed, 86 percent of children killed, 99 percent of those tortured to death and 80 percent of medical personnel killed.

Codename Caesar – a catalogue of horrors

In February 2016, the UN Commission of Inquiry for Syria accused the Syrian government of the "mass extermination of the civilian population". And the more than 53,000 photographs that the military photographer codenamed Caesar was able to smuggle out of the country in 2013 provide evidence the likes of which prosecutors in previous war tribunals have never seen before.

The Commission for International Justice and Accountability (Cija), an NGO made up of former investigators at international courts, goes one step further. It smuggles official documents out of Syria to evidence chains of command. After all, it must not only be proven in court that crimes against humanity took place, but above all who ordered these actions. Cija is storing more than a million documents in secret locations; the first files with the names of suspects have been put together and are now awaiting a court that is willing to take on these cases.

Currently, only national courts can be considered for this. They have three possibilities to initiate investigations. Firstly, when a citizen of the court's own country has committed a crime in Syria – for example German jihadists in the terror group IS. Secondly, if citizens come to any harm in Syria – for example the two Syrian-French men (father and son), who were arrested in Damascus in 2013 and have since disappeared without trace.

A court in Paris began investigating this case in October. And thirdly, when the crimes are so grave that they are matter of concern for the whole world – such as the offences listed under §1 of the international criminal code: war crimes, genocide and crimes against humanity. However, the latter only works in nations such as the Federal Republic of Germany, which recognises what is known as the principle of universal jurisdiction.

Assad will probably never be held to account in a German court. But Toby Cadman, an international criminal law specialist from Britain, is describing the process as "extremely significant", because it is the first of its kind. For years, Cadman has been securing evidence of the crimes in Syria, painfully working his way through the Caesar photos as part of the process – "the most terrible" images he has ever seen.

On the basis of the Caesar files, his chambers are working on opening a trial in a European nation that he does not yet want to name. The more that is investigated now the better, says Cadman, so that evidence is collated and witnesses interviewed now, rather than in 10 years' time. And so that the international community is put under more pressure to end the continuing genocide.

Germany is the perfect location for the indictment, because it has more Syrian refugees than anywhere else in the West – half a million potential witnesses to the horrors being perpetrated in their country. Lawyers hear about many of these on a daily basis, when they represent the Syrians in their asylum claims. This gave rise to the idea of using these statements for an indictment against Assad. 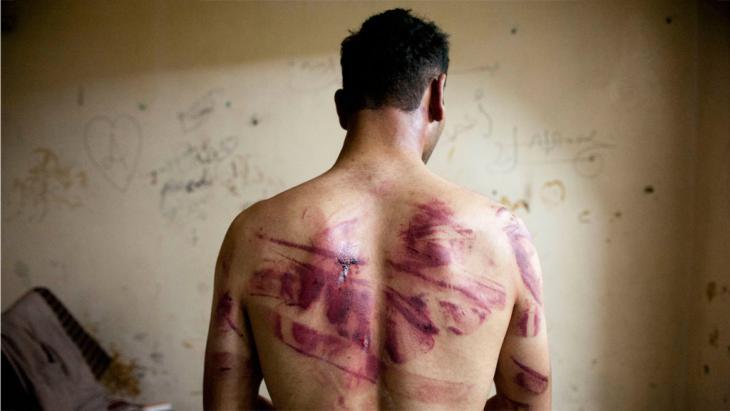 Waging war on his own people: UN investigators accused the Assad regime of crimes against humanity back in February 2016. Over the last four years, thousands of detainees had died in custody, said the Commission. A situation tantamount to genocide. The experts also accused the Islamist rebel groups IS and Nusra Front of war crimes. Evidence existed of executions and the torture of prisoners

The presence of the Syrians also brings with it two other opportunities. Firstly, Syrians should be involved in constitutional mechanisms as soon as possible, so that they themselves can process these crimes after the end of the conflict. "The Syrians must develop a system of transitional justice," says Cadman. This is because the sheer number of crimes cannot be dealt with at one international tribunal.

"Only individual selected cases would at some point end up in The Hague," the lawyer explains. All the others, hundreds of thousands of Syrians whose relatives have disappeared, been tortured to death or killed, must be heard in Syria, otherwise the nation will never find peace, says Cadman. "Without justice no reconciliation, no stability and no peace."

The second opportunity is presented by the fact that among those Syrians who have fled to Germany, there are not only victims, but perpetrators: representatives of Syrian state security, the army or foreign pro-Assad militias. If successful cases were brought against these individuals here, their compatriots could then develop trust in legal institutions and processes. Despite many indications that Shabiha militiamen have gone to ground in Germany, thus far no case has resulted in any formal charges being made. The only individuals who regularly end up in court are German jihadists on their return from Syria. That Assad's henchmen are enjoying asylum in Germany and running free, is an intolerable situation for many Syrians.

For this reason too, the legal process against Syria's ruler is sending the right message. Yes, we have understood – Assad is not the lesser evil, but a war criminal. It is not IS that kills the most civilians, but the regime in Damascus (and Russia has to date killed more civilians than IS and the Nusra Front together). And a leader who is indicted for crimes against humanity in this country cannot be made a partner in the war on terror.

Giessen, Eichsfeld, Kusel, Berlin – cars bearing old German number plates are the latest trend on the streets of Cairo. Many Egyptians regard the discarded plates as chic. What ... END_OF_DOCUMENT_TOKEN_TO_BE_REPLACED

Tunisia has been going through a severe economic and political crisis in recent years. More than one in three young people there are unemployed. For many skilled, qualified and ... END_OF_DOCUMENT_TOKEN_TO_BE_REPLACED

German imams have publicly expressed their solidarity with the women of Afghanistan. In a letter of protest, the clerics say that the Taliban regime's decree barring women from ... END_OF_DOCUMENT_TOKEN_TO_BE_REPLACED

At the end of every year, the team at Qantara.de gives you a run-down of the ten most-read articles on the site over the past 12 months. Here is a quick overview of the stories ... END_OF_DOCUMENT_TOKEN_TO_BE_REPLACED

Social engagement is often motivated by religious factors. A new book explores the background to these community efforts and appraises how effective they are in helping to ... END_OF_DOCUMENT_TOKEN_TO_BE_REPLACED

The government in the Netherlands, one of the last European nations to abolish slavery, has made an historic apology. But some feel that there is still a long way to go. By Ella ... END_OF_DOCUMENT_TOKEN_TO_BE_REPLACED
Author:
Kristin Helberg
Date:
Mail:
Send via mail

END_OF_DOCUMENT_TOKEN_TO_BE_REPLACED
Social media
and networks
Subscribe to our
newsletter