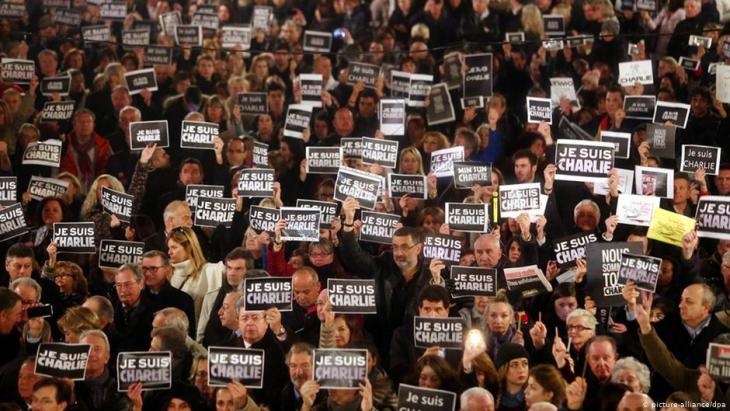 It's been over five years since the attacks on French satirical magazine Charlie Hebdo and the Jewish supermarket Hypercacher in Paris. The long-awaited trial might bring relatives and friends some sense of normality. Lisa Louis reports from Paris

Georges Wolinksi is still omnipresent in the apartment of his wife, Maryse. There are photos of the two of them on the walls and shelves and post-its by him everywhere that read "Good night, my love" and "I love you, Maryse, you're the only one I love." Five years after terrorists killed the cartoonist during the attack on the satirical magazine Charlie Hebdo, Maryse is still haunted by the memories.

"My life got turned upside down – it's his absence, the absence of his gaze, that had accompanied me for 47 years," she said. "This absence has made me ill with cancer. And I have regular nightmares. In some of them, I become my husband and live through his last moments facing the Kalashnikov."

Seventeen people died during the attacks in January 2015. First, Cherif and Said Kouachi fired their Kalashnikov rifles at Charlie Hebdo's newsroom; then they spent several days on the run. Their accomplice took 19 hostages at the Jewish supermarket Hypercacher. The police eventually killed all three assailants. Now, 14 people accused of providing logistical support such as cars and weapons to the attackers are in the dock. They could face between 10 years and life in prison. The hearings, which contrary to the norm in France will be recorded, are expected to run until 10 November. 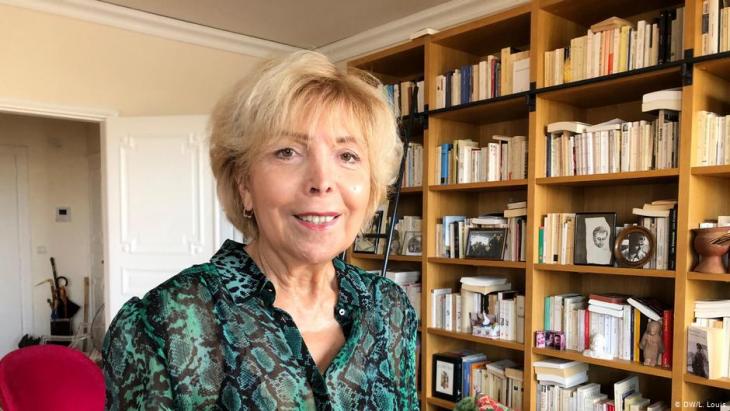 Maryse Wolinksi, whose husband, cartoonist Georges Wolinksi, was killed in the Charlie Hebdo attack in Paris on 7 January 2015. She hopes the hearings, which recently got underway, will provide her with some answers. "I need to understand as well as possible what was in the mind of his assassin, Cherif Kouachi. […] It's like any additional information could help me get closer to what my husband went through the moment he got killed."

They became a target because they mocked the Prophet

Maryse is one of the plaintiffs in the trial that started on Wednesday. She hopes the hearings will provide her with some answers. "I need to understand as well as possible what was in the mind of his assassin, Cherif Kouachi," she explained. "It's like any additional information could help me get closer to what my husband went through the moment he got killed."

The magazine was targeted because it had repeatedly mocked the Prophet Muhammad. This attack on the freedom of the press triggered a worldwide backlash. Millions of people took to the streets of Paris a few days later in a show of unity, and the slogan "Je suis Charlie" (I am Charlie) went global.

And yet, since the January 2015 attacks, the pressure on press freedom has increased in France particularly with the rise of populist politics and an increasing distrust of the traditional media. A recent survey by polling institute Kantar on behalf of daily newspaper La Croix found that 41% of the French are no longer interested in the information provided by traditional media. That's a record since the yearly poll was first carried out 33 years ago. 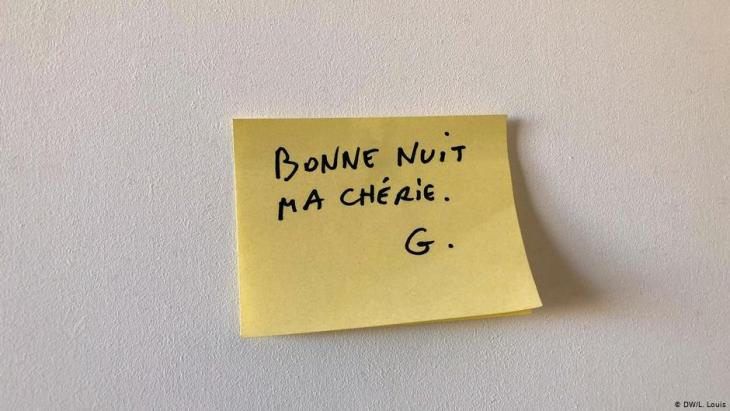 A hand-written post-it note from Georges Wolinksi to his wife, Maryse, hanging in her apartment. Seventeen people lost their lives in a number of attacks between 7 and 9 January 2015 in the Île-de-France region. According to Lisa Louis, over the past five years, the pressure on press freedom has increased in France, particularly with the rise of populist politics and an increasing distrust of the traditional media

The internet "has made things worse"

Charlie Hebdo kept publishing, even right after the attack. It's now continuing its activities from a secret, heavily guarded location. The magazine still regularly receives threats. Its editor-in-chief Gerard Biard said the internet has made things worse. "Nowadays, when people read critical comments on social media, they immediately take them personally," he said. "They reply and threaten you in a very violent way.  But satire and press cartoons are not supposed to please. They are supposed to be critical, upset people and be thought-provoking. That cartoon culture is increasingly getting lost."

About half of today's journalists and cartoonists at Charlie Hebdo are new members of the staff. Some of the old guard have since left, like Zineb El Rhazoui. She wasn't at the newsroom when the attack happened — just like Biard. El Rhazoui stills works as a journalist and calls herself an "activist for secularism." But that fight against radical Islam is getting ever more difficult, she said. El Rhazoui is also under constant police protection.

"We thought at the time we had hit rock-bottom, but that wasn't the case," she stated. "Afterwards came the horrible attacks at the Bataclan music hall, the one in Nice in 2016 and numerous others with people yelling 'Allahu Akbar.' Since 2015, things really have gotten worse. Radical Islamists have become more and more uninhibited in propagating their views." 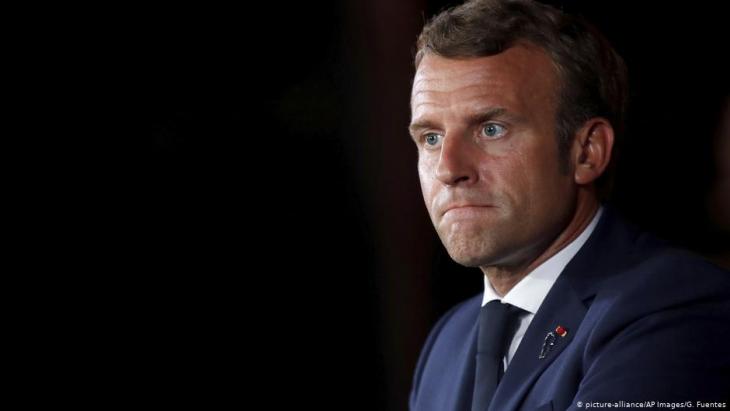 Speaking during a recent visit to Lebanon, French President Emmanuel Macron said it was not his place to pass judgment on the decision by Charlie Hebdo to publish a cartoon of the Prophet Muhammad. Macron extolled the virtues of democracy and freedom of speech as he said: "It's never the place of a president of the Republic to pass judgment on the editorial choice of a journalist or newsroom, never. Because we have freedom of the press."

The trial of an ideology?

For El Rhazoui, the court case also has a symbolic meaning. "I hope that this will be the trial of an ideology that has killed our friends," she said. "This view is now so well established and hides behind the freedom of expression to spread its oppressive ideas. And we are hoping that justice will help us mourn this crime."

Paris-based Lawyer Marie Dose appreciates how important the court case is for the victims and relatives. She represents one of those on trial who is suspected of having provided weapons for the attackers and could face up to 20 years in prison. "I understand that the hearing will help the bereaved express their sorrow and our country come to terms with this terrible attack," she said.

"But let's keep in mind who the real enemy is – or do you really think the attackers would tell anybody about their plans? The accused weren't privy to the plot. They are almost crumbling under the accusations. It's as if they were the attackers – and not the Kouachi brothers and Coulibaly [the supermarket attacker — the ed.]."

Maryse Wolinski hopes the court case will bring her one tiny step closer to some kind of normality. Just like the three books she has published on the attack. The latest, Au risque de la vie, ("At the risk of my life") talks about how difficult the past five years have been for her.

Philosopher Juergen Habermas was due to be awarded a major Arab prize in Abu Dhabi, but has turned it down following criticism. This decision torpedoes Arab efforts at a ... END_OF_DOCUMENT_TOKEN_TO_BE_REPLACED

Although a unity government was formed in Libya in March 2021, tensions and possible crises between the political actors are already emerging. What problems does the country face ... END_OF_DOCUMENT_TOKEN_TO_BE_REPLACED

Among Muslims, the image of women as "cossetted hijab-wearing princesses" is frequently invoked. But Muslim women have long wanted to be more. In her essay, Karoline Roscher- ... END_OF_DOCUMENT_TOKEN_TO_BE_REPLACED

Even in times of war and pandemic, refugees are still being deported to Afghanistan. Several deportation flights have taken place in recent weeks alone. Since those affected often ... END_OF_DOCUMENT_TOKEN_TO_BE_REPLACED

Surging coronavirus cases in many parts of the world have overshadowed the start of this year's Muslim holy month of Ramadan, with festivities once again curtailed by contagion ... END_OF_DOCUMENT_TOKEN_TO_BE_REPLACED

German Middle East analyst Guido Steinberg and television journalist Ulrich Tilgner have both published new books on the conflicts in the Middle East. Their analyses and their ... END_OF_DOCUMENT_TOKEN_TO_BE_REPLACED
Author:
Lisa Louis
Date:
Mail:
Send via mail

END_OF_DOCUMENT_TOKEN_TO_BE_REPLACED
Social media
and networks
Subscribe to our
newsletter